Pro-Trump New Balance Sneakers Are Made In USA! 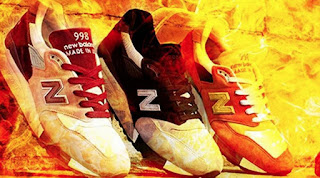 New Balance's Trump comment sparks fiery outrage and also pledges to buy: Shoe company New Balance got a taste of the sharp division surrounding U.S. President-elect Donald Trump's surprise win this week after its comments about his impending presidency sparked both backlash and pledges of support.

"The Obama administration turned a deaf ear to us and frankly, with President-elect Trump, we feel things are going to move in the right direction," Matthew LeBretton, New Balance's vice president of public affairs, told The Wall Street Journal on Wednesday.

Some customers (mainly the Muslims) took to social media to express their unhappiness with the company's stance and announced their plans to protest the move by boycotting or throwing out their New Balance shoes.


“Tariq Nasheed
✔ @tariqnasheed: Besides New Balance, what other corporation endorsed Trump? Let me know so I can boycott them for life.”


Other customers took the opposite reaction and said the move would lead them to buy more shoes from the company.

“Jessie Jane Duff
✔ @JessieJaneDuff: Time for me to buy New Balance shoes: The only major company that still makes athletic shoes in the US praised Trump.”


LeBretton's decision to support Trump had been, in part, because of Trump's opposition to the Trans-Pacific Partnership (TPP) agreement, which would phase out some tariffs on shoes made in Vietnam and thus benefit companies that import shoes, such as Nike and Adidas, NPR reported.

However, according to the U.K.'s Daily Mirror newspaper, New Balance's vice president has since attempted to cool the Trump rhetoricm insisting his remarks were taken out of context. New Balance was not immediately available for comment. 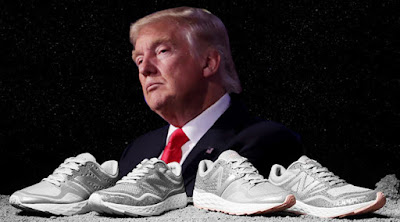 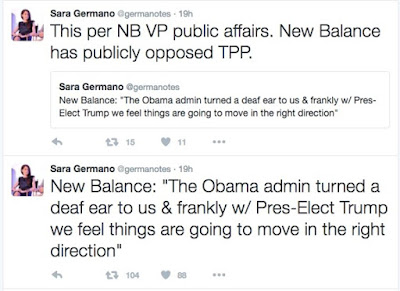 Shoemaker New Balance is criticizing the Obama administration over the Trans-Pacific Partnership. The company is trying to make a running shoe with 100 percent American parts and feel the trade deal will doom shoes made in the U.S.

KELLY MCEVERS, HOST: President Obama's big free-trade deal hasn't seen much progress over the last few months. The Trans-Pacific Partnership, the TPP, is stalled in Congress. The leading candidates for president have come out against it. And now one of the country's most well-known manufacturers is picking a new fight over the trade deal. Robert Smith from our Planet Money team reports.

ROBERT SMITH, BYLINE: If you're wearing running shoes right now it is almost a guarantee that they were made in Asia, even though there is a hefty hidden tax on the product. When an athletic shoe arrives at a U.S. port, it is slapped with a tariff of up to 20 percent. You want sneakers without a tariff, you got to get them from a place like this.

I'm at one of the New Balance factories in Boston. New Balance is doing something that you never see in America anymore. They're moulding the spongy sole of a running shoe.

JOE HUSSON: So we take plastic pellets. We melt them down. We inject them in.

SMITH: Joe Husson pulls a foam midsole right out of the machine.

HUSSON: As soon as it hits air, boom.

SMITH: This kind of thing is usually done at a plant in Vietnam or China, but New Balance has made it a company priority to make some of its shoes in the U.S., and New Balance gets a benefit from it - their competitors pay the tariff, the tax. New Balance, on its American-made shoes, does not. At least, until the TPP came along. Part of the trade deal is that tariffs on shoes from Vietnam will be phased out, and that is a huge boost to companies that import their shoes. Think Nike or Adidas. And frankly, it's good for some shoe buyers.

MATT PRIEST: You'll see a lot of prices decline on footwear sourced out of Vietnam.

SMITH: Matt Priest runs the Footwear Trade Group, a group that does not include New Balance because New Balance was dead set on fighting the TPP. Even though New Balance imports many shoes and many parts from Vietnam, they felt that overall it was essential to have some protection for their factories in the U.S. But something strange happened when they told the Obama administration that they were going to fight the TPP. Vice president of public affairs at New Balance Matt LeBretton remembers.

MATT LEBRETTON: They said take it or leave it. We were prepared to leave it. Then the trade ambassador came to us and said, look, I know you have this other initiative - you want to sell shoes to the military?

SMITH: Shoes to the military - a big, sweet military contract. You see, the military is required to buy uniforms and boots that are made in the U.S.A. They haven't really been doing that for sneakers because it's hard to find totally made in U.S.A. running shoes, but New Balance has just created one. Engineer David Sullivan is the guy who did it.

DAVID SULLIVAN: The sole unit's Carolina. The outsole is Massachusetts. Ohio is the insert.

SMITH: What about the shoelaces? 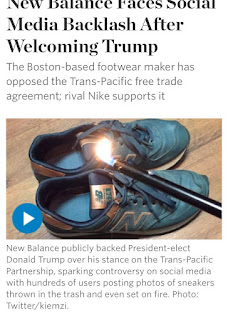 SMITH: And so New Balance is thinking, wait a minute, if we can get a shot at a military contract for these shoes, that would potentially be 125,000 American-made shoes a year. That could keep the U.S. plants running. Matt LeBretton says the trade negotiator for the TPP just wanted them to stop bad-mouthing the deal.

SMITH: And so when the TPP was being negotiated, New Balance kept its objections to itself and hoped to get a meeting with the military about those shoes. The meeting never came.

LEBRETTON: We couldn't even get in the front door. I mean, they wouldn't even let us in the parking lot.


SMITH: The Office of the U.S. Trade Representative declined an interview. They said in a written statement that they did support New Balance getting a fair shot at a military contract but that New Balance has yet to make a shoe that meets the military's standards. Clearly there are bad feelings all around here. And New Balance says they will now be very vocal about their opposition to the trade deal. Expect their workers to be waving shoes produced in the U.S.A. and saying keep these made here. Robert Smith, NPR News.