(Staff article direct from The IRRAWADDY & MAH FACEBOOK on 28 November 2016.) 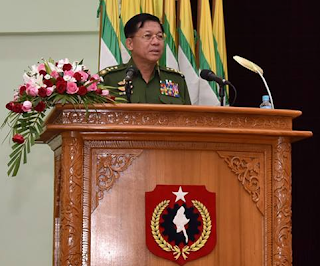 NAYPYIDAW — Burma’s military chief Snr-Gen Min Aung Hlaing discussed the provisions for a state of emergency and a potential military takeover of the country, amid an ongoing military conflict in northern Shan State and threats from Muslim militants in the west Burma.

It was the second time this month that the army chief mentioned the clause in Burma’s 2008 Constitution—which was also drafted by the military—that allows the military to stage a coup in the event of chaos and instability. The Constitution also reserves 25 percent of the seats in Parliament for military representatives.

In his speech at the National Defense College (NDC) on Saturday, the military chief justified the army’s continuing role in Burmese politics. The military is a stabilizing force on political and ethnic issues, he said.


The military would not engage in ‘party politics,’ but the 2008 Constitution did enshrine provisions for a state of emergency, said the senior general, according to the military mouthpiece Myawaddy Daily. “[People] need to know the realities and the historical facts about the military and the State,” he said, also emphasizing the need to solve ethnic issues.

According to a clause in the 2008 Constitution, in case of a state of emergency in the country, the president would announce the order in coordination with National Defense and Security Council (NDSC). He would then transfer the government’s executive, legislative, and judicial powers to the Commander-in-Chief of the Defense Forces.

Earlier this month, Snr-Gen Min Aung Hlaing spoke to the European Union Military Committee in Brussels, where he said that the Constitution defines “the role of the Myanmar Armed Forces in conformity with the real situation of the nation.”

“If one studies the ‘Provisions on State of Emergency’ in the Chapter XI of the Constitution (2008),” he said, “one will find various step-by-step provisions for the Myanmar Armed Forces in order not to seize the State power easily and in order not to hold the State power for a long time, even if the Myanmar Armed Forces takes the responsibility of the State under the agreement of the President.”

Burma experienced government by a military dictatorship from 1962 until 2011, when the military ceded power to a quasi-civilian government that consisted mostly of retired army generals. Only this year did the Southeast Asian nation see a civilian government, elected by its people, finally assume power. 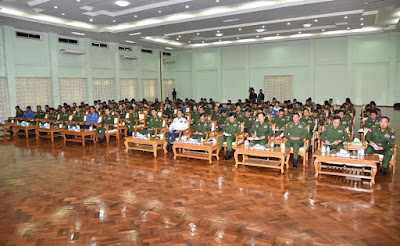 Following is the direct excerpt from Senior-General Min Aung Hlaing's face book post of his address to the NDC in Nay Pyi Daw.


For political stability and national affairs, the Senior General said the Tatmadaw continued to play in a role in national politics. The Tatmadaw are not to be engaged in the party politics. So, “Provisions on State of Emergency” was enshrined in the 2008 Constitution.
Posted by Hla Oo at 8:32 PM