Is Trump Turning Too Soon Into A Liberal Politician?

Call for Muslim Immigration Ban Now Off Trump's Website. During the campaign, Trump later said the ban addressed Muslims from countries with terror problems, not Muslims across the board.

President-elect Donald Trump removed the statement on his website calling on a temporary ban on Muslims from entering the United States, reported the Independent. The statement was apparently taken down on election day morning.

Less than a month after the horrific attacks in Paris in November of 2015, Trump called for a “total and complete shutdown of Muslims entering America until our country’s representatives can figure out what is going on.” Trump cited a Pew Research poll, among others, that indicated “there is great hatred towards Americans by large segments of the Muslim population."


Defending the call, Trump said in a statement, "Without looking at the various polling data, it is obvious to anybody the hatred is beyond comprehension. Where this hatred comes from and why we will have to determine.

"Until we are able to determine and understand this problem and the dangerous threat it poses, our country cannot be the victims of horrendous attacks by people that believe only in Jihad, and have no sense of reason or respect for human life."

During the course of the campaign, Trump softened his stance, saying that he was addressing the ban to immigration of Muslims from countries with terror problems and not Muslims across the board. By the end of the campaign, he had ceased to speak about any such ban.

A statement on Donald Trump's plan to ban all Muslims from entering the US has mysteriously disappeared from his website. On the same night that millions of votes were pouring in for the real estate mogul turned politician, the page linking to his December 2015 statement was removed.

The page now redirects to a page encouraging voters to donate to his campaign. The page was available on the morning of the election on 8 November, according to online caches studied by The Independent. But the redirect was added later the same night.

Caches like the Wayback Machine work by crawling websites intermittently and making a copy of what it finds there. As such, it is not possible to say exactly what time the redirect was added, but only that the change had been made between those two times it was crawled.

Mr Trump was widely condemned for his call shortly after the terrorist attacks in Paris in November 2015 to temporarily ban all Muslims from entering the country until he figured out "what the hell was going on".

The Republican and his allies have consistently defended the ban, insisting the measure was about Americans’ "safety" and not about discriminating against religion. Videos and speeches defending the ban remain on the Trump campaign website.

The Trump campaign could not be immediately contacted. It would not be the first time the Trump team has scrubbed pages from its websites. After speculation rose that Melania Trump did not not complete her university degree, her biography page was taken down and redirected to the homepage for Mr Trump’s golf course. 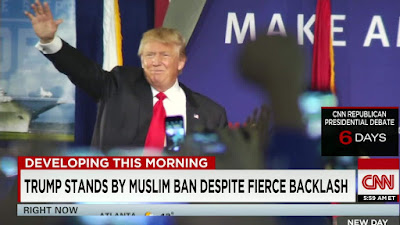 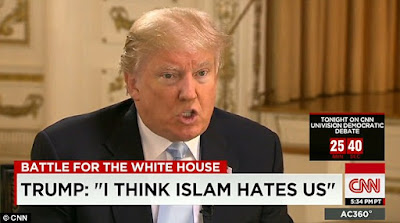 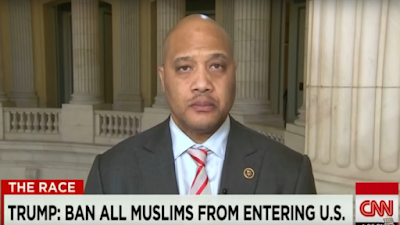 Among his most important tasks will be to take the hard steps necessary to establish a sane and realistic stance for the United States toward the global jihad threat. To do that, he should implement measures such as these:

[1] Suspend (as promised) immigration from nations that are hotbeds of jihad terror activity.

While excoriated as “racist,” this proposal is a simple matter of national security. No one who opposed Trump’s proposal ever offered an alternative way to keep jihadis out of the country. (Of course, the problem of those who learn jihad inside the U.S. is also acute, and must be addressed). Some glibly opined that Trump should ban “Islamists,” not Muslims as a whole, yet never suggested a reliable way to distinguish “Islamists” from ordinary Muslims.

Indeed, the Islamic State has instructed its operatives to appear secular -- to avoid ostentatious displays of Islamic piety that might arouse suspicions of “radicalization.” Can America really afford the national security risk of importing whole Muslim communities from Iraq and Somalia, as is happening now, without even making any serious attempt to screen out potential jihadists?

[2] Tell the truth about Islamic jihad and supremacism.

Ever since 2011, it has been official Obama administration policy to deny any connection between Islam and terrorism. This came as a result of an October 19, 2011 letter from Farhana Khera of Muslim Advocates to John Brennan, who was then the Assistant to the President on National Security for Homeland Security and Counter Terrorism, and is now head of the CIA.

The letter was signed not just by Khera, but by the leaders of virtually all the significant Islamic groups in the United States: 57 Muslim, Arab, and South Asian organizations, many with ties to Hamas and the Muslim Brotherhood, including the Council on American-Islamic Relations (CAIR), the Islamic Society of North America (ISNA), the Muslim American Society (MAS), the Islamic Circle of North America (ICNA), Islamic Relief USA; and the Muslim Public Affairs Council (MPAC).

The letter denounced what it characterized as U.S. government agencies’ “use of biased, false and highly offensive training materials about Muslims and Islam.” Despite the factual accuracy of the material about which they were complaining, the Muslim groups demanded that the task force “purge all federal government training materials of biased materials”; “implement a mandatory re-training program for FBI agents, U.S. Army officers, and all federal, state and local law enforcement who have been subjected to biased training”; and more—to ensure that all that law enforcement officials would learn about Islam and jihad would be what the signatories wanted them to learn.

Numerous books and presentations that gave a perfectly accurate view of Islam and jihad were removed from coounterterror training. Today this entrenched policy of the U.S. government ensures that all too many jihadists simply cannot be identified as risks, since the administration is bound as a matter of policy to ignore what in saner times would be taken as warning signs.

Trump must reverse that. He has spoken about the threat from “radical Islamic terrorism” on the campaign trail; he must follow through as President and remove the prohibitions on allowing agents to study and understand the motivating ideology behind the jihad threat.

[3] Remove all those linked with the Muslim Brotherhood from any position of responsibility, and end all government agencies’ interaction with groups linked with Hamas.

This shouldn’t even have to be said, but there has been evidence of Muslim Brotherhood operatives having influence in the U.S. government back to 2012, when Representative Michele Bachmann called for an investigation of that infiltration. It’s high time that investigation was actually conducted.

Section 2385 of the federal criminal code states that “whoever knowingly or willfully advocates, abets, advises, or teaches the duty, necessity, desirability, or propriety of overthrowing or destroying the government of the United States or the government of any State, Territory, District or Possession thereof, or the government of any political subdivision therein, by force or violence, or by the assassination of any officer of any such government…shall be fined under this title or imprisoned not more than twenty years, or both, and shall be ineligible for employment by the United States or any department or agency thereof, for the five years next following his conviction.”

It may be that the proviso in this statute that the overthrow of the government must be planned as taking place by “force and violence” may prevent this law from being applied against Muslim Brotherhood groups that are intent on subverting America from within. Legal minds should study that issue. But surely – somehow -- working toward “eliminating and destroying Western civilization from within,” as the Muslim Brotherhood has stated its own strategic goal for America, ought to be a prosecutable offense.

The U.S. government should call upon Islamic advocacy groups in this country to renounce, any intention now or in the future to replace the Constitution of the United States with Islamic Sharia. This renunciation should be backed up with transparent action to teach in mosques and Islamic schools against this intention, and against the elements of Sharia that contradict American freedoms. Those that refuse to do this, or are found to be teaching these aspects of Sharia, should be immediately closed and prosecuted.

Such that no state that oppresses women or non-Muslims in accord with Sharia provisions gets a penny of American aid, or is considered a U.S. ally.


The swamp needs draining indeed. These measures, if adopted, would go a long way toward putting the U.S. back on dry land.

(Blogger's Notes: I just hope our President Donald J. Trump do not abandon his 28-points Contract With America just too soon.)
Posted by Hla Oo at 6:03 PM