(Barbara Hollingsworth’s article direct from The CNS NEWS on 16 November 2016.)

(CNSNews.com) –   Republicans added to their historic 2014 gains in the nation’s state legislatures with the addition of five state House chambers and two state Senate chambers in last week’s election, while Democratic control was reduced to levels not seen since the Civil War.

Republicans are now in control of a record 67 (68 percent) of the 98 partisan state legislative chambers in the nation, more than twice the number (31) in which Democrats have a majority, according to the bipartisan National Conference of State Legislatures (NCSL).

Next year, the GOP will control both legislative chambers in 32 states - an all-time high, according to NCSL - while Democrats will have total control of just 13 state legislatures. In 24 of the 32 states with Republican-controlled legislatures, voters have also elected Republican governors. In contrast, Democrats have a “political trifecta” in just six states.

In 2009, Democrats had total control of 27 state legislatures, and held a majority in at least one chamber in eight more states where power was divided. In contrast, Republicans controlled just 14 state legislatures.

During Obama’s first year in office, Democrats held 1,024 of the 1,971 total state Senate seats in the nation, compared to 889 in Republican hands. They also held 3,058 of the total 5,411 state House seats, compared to 2,334 for Republicans. In addition, there were 28 Democratic governors, compared to 22 Republican governors.

However, near the end of Obama’s two terms in office, the partisan balance in the nation's state legislatures has been completely reversed.

As of Nov. 7, 2016, there are just 823 Democratic state senators out of a total of 1,972 seats nationwide, according to NCSL data. Meanwile, Republicans have increased their ranks to 1,089. Likewise, of the 5,411 state House seats, there are now 3,029 Republicans compared to 2,340 Democrats – a mirror image of both parties’ status in 2009. (Source: National Conference of State Legislatures)

The Democrats’ prior advantage in the nation’s governors’ mansions when Obama took office has also been lost. There are currently 31 Republican governors, 18 Democratic governors and one Independent (Gov. Bill Walker of Alaska). “Republicans grabbed more of America’s statehouses and governors' mansions during the Obama administration than at any time in the modern era,” the Washington Post’s Amber Phillips reported. 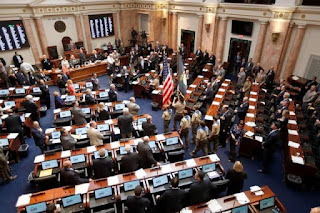 Last week’s historic flip of the Kentucky House - the last Democrat-controlled legislative chamber in the South - to Republican hands for the first time in nearly 100 years underscores the point. In 2010, Democrats in the Kentucky House held a solid 65-35 majority.  Six years later, the GOP now has a supermajority, and will control 62 of the chamber’s 100 seats. “Democrats are now basically extinct in the South,” Phillips noted.

“Republicans bested expectations,” said Dan Diorio, a policy expert at NCSL. “Having already reached the peak of control in party history, Republicans will maintain a similar level of control in a year when many expected Democrats to net seats and chambers.”

“Anyone who said that Donald Trump was going to be a drag on down-ticket races is certainly eating their words right now,” Lisa Nelson, CEO of the American Legislative Exchange Council (ALEC) told CNSNews.com.

“When I talk to the states, most of them say they picked up state Senate or House seats because of Donald Trump. And I think that’s because of the forgotten man or woman people are talking about, who hadn’t shown up to vote in the past.”

Although most of the mainstream media failed to predict that Trump would win, those following state legislative races were not surprised by his victory, Nelson added.


“People in the states saw this race tightening easily a week before the election. In particular, I was talking to somebody in Wisconsin who said they were going to pick up seats because of Donald Trump on the ticket, and sure enough they did,” she told CNSNews. “A lot of those voters ‘came home’ in the last week or two. They were talking, but a lot of the media wasn’t listening.” 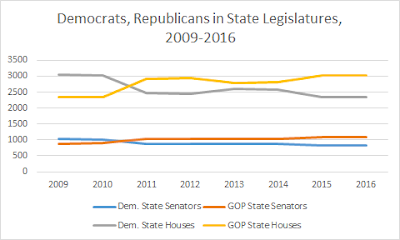