(Wayne Allyn’s article direct from The BREITBART on 07 November 2016.) 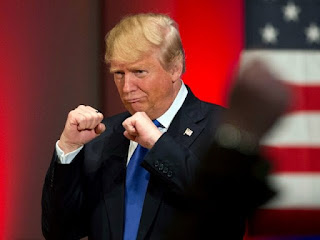 Vegas Oddsmaker Predicts Brexit-like Trump Victory. I’m the only national political commentator (and Vegas oddsmaker) who has predicted a Brexit-like election result for Donald Trump since day one.

I’ve stuck with my prediction through thick and thin, through derision, through laughter, through polls showing Hillary leading by 13 points, through every “expert” predicting a Hillary landslide up until only two weeks ago. Don’t look now, but I’m about to look very smart. All the ingredients have fallen perfectly into place for “Trexit,” our own version of Brexit starring Donald Trump.

My final prediction? It’s the same one I told personally to Donald Trump a week ago. I was opening speaker at Trump’s rally in Las Vegas in front of 10,000 fans. When I saw Donald backstage I told him, “Here’s my prediction…You will win by a 10-point landslide…but Democrats cheat by 8 points…so the final official election results will show you won by 2.”


My prediction is based on three things: Brexit, Goldman Sachs and what I call the ANGRY WHITE ELECTORATE effect.

Let’s start with Goldman Sachs. It was only two weeks ago that Goldman Sachs actually felt the need to issue a report arguing this was not Brexit. It was very clear to me at that moment, the very fact that the most powerful and politically-connected company on Wall Street felt the need to publicly debunk the Brexit angle was proof positive this was in fact Brexit.


Here’s the safest bet in life- when the powerful and connected of DC, or Wall Street, or the mainstream media, deny anything, you know it’s 100 percent true. Ask Hillary about her deleted emails, or Benghazi, or the Clinton Foundation, or whether she rigged the Democrat primary against Bernie Sanders. When they strongly deny, they always lie.

But I digress. Back to the Goldman Sachs report. Their argument two weeks ago was simple: this could not be Brexit because Brexit was closer in the polls than Trump. They claimed that Trump was losing badly.

In every poll before the shocking Brexit result, Brexit was trailing by an average of 4.4 points. But a few million white working class voters either weren’t on the pollsters radar, or weren’t talking publicly about their vote. Brexit shocked the pollsters and “experts” and won.

Skip ahead to today. Trump trails by 2, 3, or 4 in every single poll- ABC, CBS, Fox, Rasmussen, Bloomberg. The Real Clear Politics average of all polls shows Hillary leads by 2.6 points. Hey Goldman, don’t look now, but that’s dramatically LOWER than the 4.4 point average before Brexit.

None of this takes into account the most accurate poll of 2012 that predicted Obama’s victory exactly on the number. The IBD/TIPP poll reports Trump UP by 2 points nationally as of today. The USC/LA Times poll (the only poll to factor in enthusiasm and intensity) has Trump UP by 5 points.

I’ve made two predictions since day one. First that there is a 5-point “Hidden Trump factor” missing from every poll. There is 5 percent of the population that is unwilling or embarrassed to say in public (in the face of nonstop biased-liberal media derision) that they support Trump. Add in that 5 percent and Trump wins the election, now that every poll is within 2 to 4 points. I disagreed with Goldman Sachs two weeks ago, but they are clearly dead wrong today. This is our version of Brexit.

My second prediction was that Trump would win based on the biggest turnout of white voters in history, combined with low turnout for blacks. Both patterns appear to be happening based on early voting patterns.

I wrote the book “ANGRY WHITE MALE.” I predicted the greatest turnout of angry white working class and middle class males in history. I was only partially correct. At last Sunday’s Trump rally in Las Vegas the audience was 60 percent or more white women. Trump is loved by white males, but it appears white females feel the same way. This isn’t the ANGRY WHITE MALE election. It’s the ANGRY WHITE ELECTORATE election. Both white men and women will come out in record numbers for Trump.

I have predicted from day one that black voters can’t stand Hillary and would never come out for her in the same numbers they voted for Obama. If black turnout is down substantially, Trump wins. Its all about turnout, which is precisely why the USC/LA times poll shows Trump up by 5 points.

Now we come to the electoral college. Elections aren’t won by popular vote. They are won state by state. If Trump wins Ohio, Florida and North Carolina, it’s over for Democrats. It’s that simple. Trump is winning or within 1 point in all three crucial battleground states.

But Trump is also winning, tied or very close in Michigan, Pennsylvania, Iowa, Wisconsin, New Hampshire, Nevada, Colorado, New Mexico. Mitt Romney lost all of those states. Trump could win all of them. But if he wins only half, plus Ohio and either Florida or North Carolina, he’s the President of the United States.

The best sign of all that Trump is on his way to a Brexit victory is the mock presidential election in Minnesota- one of our five most ultra-liberal states. High school kids across the state gave Trump a 34-32 victory a few days ago. In Minnesota!


Something special and shocking is happening folks. The mainstream media, Democrats, government and mainstream media haven’t a clue what’s about to hit them. I call it Trexit. My final prediction: Trump wins by 10, Democrats cheat by 8, he wins by 2.
Posted by Hla Oo at 2:40 AM