(Staff article direct from The RAYMOND IBRAHIM on 24 November 2016.) 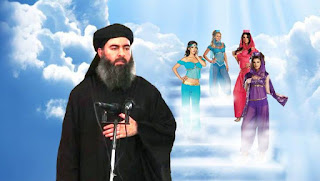 Al-Baghdadi did this during an extra “fiery sermon” wherein he recounted 15 hadiths and three stories dealing with the Houris in the context of the original Muslim conquest of Mosul, circa. 637, at the hands of Muhammad’s companions (the sahahba).

After promising his followers that “blood will run like rivers in the [forthcoming] battle,” al-Baghdadi declared: “All, without exception, will enter paradise as martyrs.  Moreover, you will enter paradise with four more Houris than other martyrs.  For just as you stand by me now, so will they stand by you, or under you, or above you, so that you might forget what will happen to you by way of violence, death, and degradation in this war.”

While it is easy to dismiss this report as a hoax (among other things, it doesn’t explain why al-Baghdadi thinks they will get four more heavenly concubines), the problem is that Islam—from its history and doctrines, to the exhortation of its leaders, from Muhammad to al-Baghdadi—is full of stories and enticements concerning the Houris.


Here, for instance, is an authentic hadith—a statement attributed to Muhammad that mainstream Islam acknowledges as true—which all jihadi organizations (including ISIS) regularly invoke:

The martyr is special to Allah. He is forgiven from the first drop of blood [that he sheds]. He sees his throne in paradise…. He will wed the Houris [[a.k.a. “voluptuous women”] and will not know the torments of the grave and safeguards against the greater horror [hell]. Fixed atop his head will be a crown of honor, a ruby that is greater than the world and all it contains. And he will copulate with seventy-two Houris.   (Source: The Al Qaeda Reader, p.143).

The histories of the conquest of Mesopotamia and Syria are in fact full of anecdotes of Muslims throwing themselves into the fray and rushing to death’s embrace because they believed doing so would rush them to the warm embraces of the heavenly sex slaves.

Here are some anecdotes from al-Waqidi’s account of the battle of Yarmuk in Syria (636), which took place right around the same time as the conquest for Mosul, and which also pitted smaller Muslim forces against much greater infidel forces (in this case, Christian Byzantine):

As one Muslim captain searched for his nephew, Suwayed, in a field of Muslim corpses, he found him dying on the ground. When the man came into the vision of the fallen youth, Suwayed began to cry.  He explained that, after being speared by a Byzantine, “something amazing began to happen to me: the Houris are standing beside me, awaiting my soul’s departure.”

A jihadi reported that he came upon a fallen comrade in a strange posture: “I saw him smitten on the ground, and I watched as he lifted his fingers to the sky. I understood he was rejoicing, for he saw the Houris.” While waving his standard, another Muslim battalion leader told his men that a furious rush against the “Christian dogs” is synonymous with a “rush to the embraces of the Houris.”

Obsession over the Houris is not limited to arcane Islamic texts or ISIS.  Over the years I have watched numerous videos of Muslim men discussing their excitement at the prospect of dying in the jihad and being rushed to the embraces of the supernatural celestial women.

For an idea of how pervasive the Houri is in Islam, consider its impact on Muslim women, as demonstrated in a video of a Muslim cleric taking and answering questions via phone calls.  A woman called in expressing outrage at the Houris, saying that she would be driven “mad with jealousy” seeing her husband copulating with these supernaturally beautiful women all day in heaven.


All this is a reminder that the Muslim mindset and the motivations behind the jihad are many and multifaceted—and even include those that disbelieve in Allah and the afterlife altogether.  As such, Western secular minds would do well to stop projecting their own materialistic paradigms onto jihadis—such as when the Obama administration said that people join ISIS for “a lack of opportunity for jobs”—and start understanding Islam’s paradigms and motivations on their own terms. 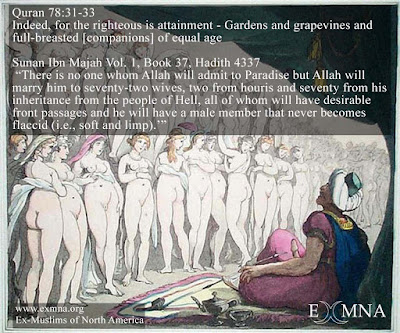 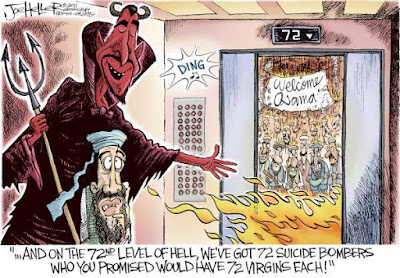 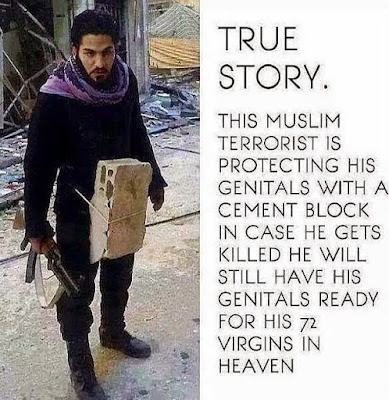