(Max Ehrenfreund’s article direct from The WASHINGTON POST on 23 November 2016.) 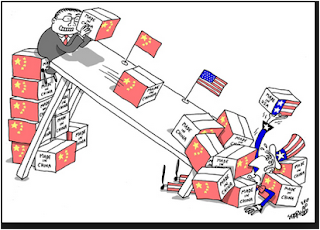 Researchers have found a troubling new cause of death for middle-aged white Americans. White Americans without a college degree are becoming more likely to die in middle age, reversing decades of progress toward better health.

Researchers first noticed this worrisome trend last year. They pointed to increases in opioid abuse, obesity and suicide among the causes of death, but what caused these increases has remained something of a mystery. This week, a pair of economists have advanced a new theory. They suggest that, for many workers, a major shift in the structure of the U.S. economy may have been fatal.

The researchers, Justin Pierce and Peter Schott, found evidence that trade with China has resulted in greater rates of suicide and poisonings (including fatal drug overdoses) after 2000, when President Clinton and Republican lawmakers allowed a major increase in imports.


Schott thinks that trade can have important economic benefits on the whole but that his results shows that policymakers need to do more to help those workers who are displaced. “I’m in favor of free trade, but I’m also someone who believes that we should be honest about the consequences,” Schott said. “It doesn’t benefit everyone equally.”

The economists estimate that the increase in Chinese imports caused an additional 0.4 suicides per 100,000 residents in counties where local economies were vulnerable to competition, relative to the trend in suicide in those places before 2000 and compared with counties that were more insulated from trade with China.

The figure for poisonings was 1.3 deaths per 100,000 people, according to Pierce, who is on the staff of the Federal Reserve's Board of Governors, and Schott, an economist at Yale University.

The nonpartisan National Bureau of Economic Research published the findings in a working paper on Monday, during an uncertain moment for global commerce. President-elect Donald Trump has promised to renegotiate trade deals and has threatened punitive tariffs on Chinese goods.

Like most experts on trade, Schott argues against new tariffs or other restrictions. Instead, he calls on policymakers to do more to ensure that everyone shares in the gains from globalization. “Closing the door to trade — I don’t see how that’s the best possible policy response,” he said. “That makes everybody worse off.” 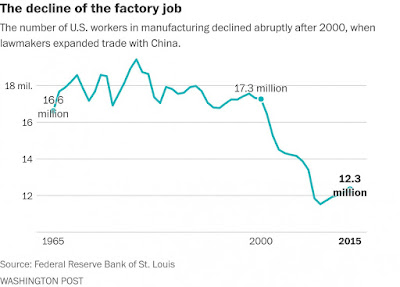 In 1930, the Smoot-Hawley legislation placed onerous tariffs on imported goods from China and elsewhere. This situation offered more implicit protection to the U.S. industries whose competitors confronted the steepest rates, including manufacturers of plastic bottles. Textile mills — especially those producing knit fabric and lace — also benefited.

Lawmakers gradually weakened those tariffs over time, and those on Chinese goods had become minimal by the end of the century. U.S. industries still enjoyed implicit protection because there was always a possibility that lawmakers would allow those tariffs to revert to the high levels set in 1930. Investors looking to put money into Chinese factories had no assurance that they would be able to continue producing goods for the U.S. market.

But in 2000, Clinton and Congress made the lower tariffs permanent, Pierce and Schott wrote, a decision that most negatively affected the industries that had the highest tariffs under Smoot-Hawley.

The researchers also considered how trade with China affected deaths from chronic liver failure from alcohol. The results were ambiguous, possibly because it can be many years before diseases such as cirrhosis of the liver become fatal.

The opening with China was far more consequential for the U.S. labor market than previous trade deals, including the North American Free Trade Agreement. Employment in domestic manufacturing, which had been declining only gradually, plummeted after 2000.

Other economists have estimated that Chinese imports put between 2 million and 2.4 million Americans out of work. The financial crisis in 2008 and the more minor recession in 2000 added to the decline. 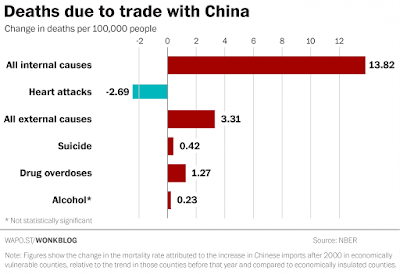 On the other hand, Pierce and Schott found evidence that exposure to Chinese competition significantly reduced the number of heart attacks, possibly because fewer people were doing strenuous labor.

On average, 2.7 fewer people died of heart attacks per 100,000 residents in the typical county with a vulnerable economy, compared with the prior trend in those counties and relative to counties that were more insulated economically.

Schott noted that while the research focuses specifically on counties where Chinese imports had negative economic effects, trade with China might have brought economic benefits to the country as a whole, improving Americans' health. “This paper is about one piece of the puzzle,” Schott said.

American consumers broadly were able to spend less on inexpensive Chinese imports. They might have had more money left over for medical costs as a result. The opening also directly benefited many Americans who were able to sell their products and services to China. They include farmers, workers who build cars and aircraft in U.S. factories, and consultants and researchers who provide services to Chinese businesses.


(Max Ehrenfreund writes for Wonkblog and compiles Wonkbook, a daily policy newsletter. You can subscribe here. Before joining The Washington Post, Ehrenfreund wrote for the Washington Monthly and The Sacramento Bee.  Follow @MaxEhrenfreund)
Posted by Hla Oo at 8:39 PM