Sittwe Is Muslim-Free For 438 Days Today

If one counts the days since Bengali-Muslims were expelled from Sitwwe one will find exactly 438 days today. That is one year and two months and eleven days.

The first day of anti-Bengali-Muslim riots was June 9, 2012. One day after the Bengali-Muslims started the riots in the border town of Maungdaw.

At the beginning just after the June-2012 Muslim riots the Yakhin State Government authorities met with the city elders of Sittwe City at the City Hall and asked them if they really wanted to live without Bengali-Muslims as there would be a severe labour shortage without illegal Bengalis-Muslims.

By then most of the Bengali-Muslims from Sittwe’s three Muslim wards (Bu May, Nazi, and Imbarla Wards) were temporarily removed by the heavy-handed security forces into various make-shift refugee camps well away from the city, towards Bangladesh. Only few hundred households were left in the tightly-sealed Imbarlar Ward segregated and confined, and the Buddhist-Yakhine town elders were demanding all the Bengali-Muslims be removed permanently from their city.

The Yakhine elders promptly answered that they couldn’t live together any longer with those violent Muslims and the only way for a long-lasting peace in their city was to relocate them as far away as possible, and they could live with short-term labor shortages as the poor Buddhists would eventually take over the low-paying jobs left vacant by the illegal Bengali-Muslims.
Yakhine-Buddhist Poors are taking over Bengalis’ manual jobs

Since the third week of June 2012 Yakhine business owners and shop owners have been trying real hard to bring the town commerce back to as normal as before the Bengali riots. They have also been teaching and training more working-class Yakhine-Buddhists to be able to replace the manual jobs of Bengali itinerant workers.

The working-class Yakhines are also learning and working hard. At the beginning they were reluctant to work like low-class Bengali-Muslims for the moneyed-Yakhines, but within 6 months their attitudes have changed for the better.

Right now a Yakhine-Buddhist labourer can earn from 8,000 to 10,000 kyats a day. Of course that sort of wage is for people willing to work harder. Some are contented with only 5,000 kyats a day waged-work.

Regular day-wagers such as male carpenters and male brick-layers can easily earn 8,000 kyats a day. But female labourers do not earn that much as they earn only between 3,000 and 4,500 kyats for a day’s work. 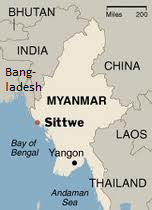 Even the lowly-works previously done by only the Bengali-Muslims are now being done by poor Yakhine-Buddhists. Such works as walking around the town selling bamboos and used-gunny bags and fresh-coconuts, buying recyclable refuse like glass bottles and plastics and sending them to Rangoon, young Yakhine boys helping the elderly shoppers with their heavy baskets, selling icecream-sticks and snacks, young Yakhine women doing the washing and cleaning for households, and even ironing, etc, etc.

And still there are many business opportunities left by the fleeing Benglais. Nobody has started going around the town selling bananas yet. But beetle nut shops are completely taken over by the natives while all the coolie (porter) jobs are now solely in the hands of native-Buddhists. And all three-wheelers (Side-cars) are now owned and operated by the hard-working native Buddhists. 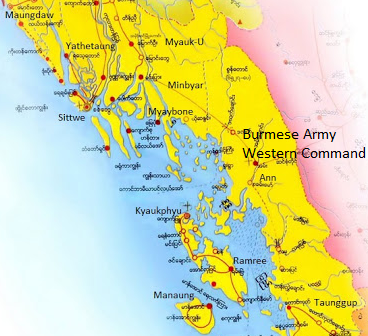 Driving the last remaining pocket of Bengali-Muslims out of Sittwe

Out of total 15 wards in Sittwe three wards namely Nazi and Bumay and Imbarlar were the Muslim wards. During the June-2012 Muslim riots the native Buddhists managed to totally destroy the Nazi and Bumay Muslim wards and force their Bengali-Muslims into refugee camps.

But Imbarlar ward is still intact with most of its Muslim residents, living on state-provided food rations, still trapped inside the tight circle of security police sealing the ward from the rest of Sittwe.

The native Buddhist-Yakhines want the ward and all its resident Muslims removed to the Bengali refugee camps in Thechaung Creek area so that their Sittwe can become the truly Muslim-free city of Arakan State.

According to U Hla Han the Yakhine State’s Road and Transoprt Minister, out of more than 300 households or families of nearly 6,000 Bnegali-Muslims, 85 households of more than a thousand people has already been moved and the rest are to be moved to the camps soon.

But about 100 households of hardcore Bengali-Muslims are still refusing to move into the camps as they have been living in Imbarlar for most of their lives, and the government is now threatening to cut off their food rations.
Illegal Bengali-Muslims are not Welcomed anymore in Sittwe

Bengali invasion into the Arakan suddenly intensified hellishly in 1942 by the massacre of more than 100,000 native Buddhist-Yakhines in Maungdaw District by the illegal Bengali-Muslims from Bangladesh. What happened during that sad period was not widely known due to the lawlessness and chaos of Second World War.

But what happened during the Buddhist-extermination riots of 2012 was totally different as our Yakhine-Buddhists were much better organized and ready to fight back the Islamists’ aggression and the tangible result so far is now Muslim-free Sittwe the capital of Yakhine State.

Though there still are many so-called INGOs like MSF and AGZ who are gladly feeding those illegal Bengalis expensive cow-milk and eggs and instigating these illegal Bengali-Muslims, who don’t even speak single word of either Burmese or Yakhine, to fight for their so-called human rights.

Once more than a million Bengali-Muslims on both side of the Bangladesh-Burma border become Burmese citizen there will be no one willing to fight against more and more millions of Bengali-Muslims from population-exploding and slowly-sinking Bangladesh overflowing us Buddhists in Arakan the severely-weakened western door of Burma.

They have international power and they have money, both coming from Saudi-funded Multination-Muslim-Mafia OIC, but we have our strength as we are now united to defend our sacred homeland. We have shown them that we can survive without these pesky Bengali-Muslims among us and we will follow that Muslim-free path to keep our way of life, our culture, our religion, and our race intact. 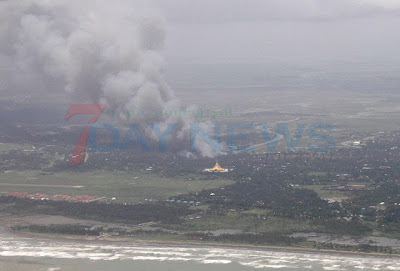 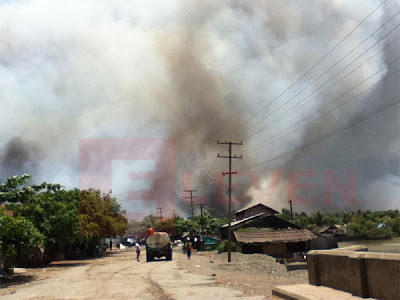 US journalists Rains and Mehboob evicted from a Buddhist-occupied mosque in Sittwe.

(Blogger's notes: The obvious fact that any Bengali-Muslim could cross the border and disappear among the the local Bengali-Muslims with ease is the reason the relentless Bengali-Muslim tide is sweeping over the native Buddhist population of Arakan.

And that incentive is to be removed permanently if Burmese-Buddhists want their Arakan to stay as a Buddhist State right next to the population-exploding and slowly-sinking Bangladesh with more than 180 million Muslims.

Thus the only way to stop Bengali-Muslim invasion right now is  rounding-up all Bengali-Muslims in the Arakan into tightly-sealed refugee camps and keeping them there indefinitely so that there wouldn't be any incentives for Bengali-Muslims in Bangladesh to enter Burma illegally. And Burmese government appears to be doing just that with the support of Burma Army.)