Quintana Pissed Off By Local Buddhists At Meikhtilar

(Direct translation of news articles from the Eleven Media Group on 22 August 2013.)

Burmese government and the local Buddhists from Meikhtilar in Burma had strongly denied the hated-Qunitana’s emotional claim that his vehicle-convoy was violently attacked by the townspeople in Meikhtilar at about 10 in the night of 19th August.

“My car was descended upon by a crowd of around 200 people who proceeded to punch and kick the windows and doors of the car while shouting abuse.” in Quintana’s own words.

At his August-21 airport-press-conference just before his departure from Rangoon International Airport the UN Special Rapporteur for Human Rights in Burma Tomas Ojea Quintana recalled his fearful experience in Meikhtilar and claimed that about 200 strong mob bashed the panels and kicked the doors and windows of his vehicle and the police escort with him didn’t do a thing to protect him.

He emotionally added that during the violent encounter with local Buddhists he fearfully remembered the Muslims’ accusations that Burmese police just haplessly watched while the Buddhist mob attacked and burned alive 43 Bengali-Muslims during anti-Muslim riots in Meikhtilar just last March.


“The fear that I felt during this incident, being left totally unprotected by the nearby police, gave me an insight into the fear residents would have felt when being chased down by violent mobs during the violence last March as police allegedly stood by as angry mobs beat, stabbed and burned to death some 43 people.” in Quintana's own words.

But Burmese Governtment’s Spokesperson U Ye Htut in his interview with AP News Agency strongly denied Quintana’s accusation and accused him of overly exaggerating his unfortunate encounter with the protesting Buddhist crowd in racially-supercharged Meikhtilar.

Ye Htut explained that the local Buddhists waiting for Quintana’s arrival there were just trying to give a protest letter and a No-Quintan T-shirt direct to their hated Quintana who is widely perceived by the Buddhists in Burma as a Muslim-biased UN’s instigator.

Ye Htut also added that Quintan’s convoy was headed by a police vehicle and another police vehicle with armed-police was also in the convoy just behind Quintana’s vehicle. Another 30 policemen were on the ground to clear the protesting crowd and the people of Meikhtilar had no intention of harming Mr. Quintan the important UN figure for Burma.

“Because of strong police presence and the crowd’s good behaviour Quintana’s convoy drove through without a scratch on the cars of the convoy,” said strongly Ye Htut the Deputy Information Minister and the Government’s Spokesperson.

Locals’ Version of the Ugly Encounter With Hated-Quintana

That day on 19 August a thousand-strong Buddhist crowd was waiting since about 5 in the late afternoon for Quintana at the Meikhtilar Bridge. But because of the Dusk-to-Dawn curfew the crowd had dispersed and by the time of Quintana’s arrival there were only about 200 in the waiting crowd.

“We were just waiting to give him a letter protesting of his Muslim-biased attitude and a No-Quintana T-shirt. We didn’t hit his car or kick the car doors and windows like he accused us of doing,” explained May Thet Oo a local Buddhist woman who was there at the scene that night.

“When Quintana’s cars arrived at the Bridge the protesting crowd was only about 150 left. We thought the very first car had Quintana and so the crowd moved forward to show him our placards. But the traffic police and the town’s elders calmed the crowd and it took no more than three minutes to clear the way.

There was no danger whatsoever to Quintana even though most people in Meikhtilar hate him. His cars were halted just few minutes. We just wanted to show him our Quintana Get-Out placards and let him hear our protest chants.

Later we three locals followed them to the Government Guesthouse to deliver our open-protest-letter. We were not allowed to see Quintana and we had to leave the protest letter with the District Administrator.

In our letter we stated that we did not agree with his report to the UN on human rights in our country and we also pointed out the fact that the March Incident in our Meikhtilar was triggered by the Muslims’ killing of a Buddhist monk and later worsened by the Mingalazayyone’s Muslims challenging violently the Buddhists that night,” said May Thet Oo who witnessed the Quintana’s Bridge Incident in the night of August 19.

De Maw Soe another Meikhtilar local man also said, “We just wanted him to see our protesting placards and to hear our chanting. We didn’t do anything harmful to his personal safety. His car just halted for just few minutes, that’s all. Nothing serious happened there.”

“Ko Mae Pa, Ko Dee Maw Soe, and Daw May Thet Oo, only three of them locals, followed them to the Communication Guesthouse and delivered a protest open-letter through the local government figures. We protested just to show him our bitter feelings, the whole town’s real feelings. We had no intention of endangering his life. No one was carrying any weapons except our protest placards,” said Htein Win Mon another local Buddhist man.

Security Men’s Explanation of What Happened Exactly There

Following was what a ranking member of local police force said of the events that day when Great Tomas Quintana visited Meikhtilar.

“Since midday that day we placed a police security detail at the Meikhtilar-Bridge. At 6 pm we added ten plain-clothed policemen there at the bridge. And ten more uniformed-policemen near the bridge. Also a police light truck with ten armed-policemen was parked nearby.

Two traffic-policemen were right on the bridge clearing the traffic when Quintana’s convoy arrived. Security Minister of Mandalay Division Colonel Aung Kyaw Moe himself and the Meikhtilar District Administrator U Tin Maung Soe and his staffers were with the convoy too.

One of the cars in the convoy also carried Meikhtilar Police-Chief Sat Nay Lin and seven fully-armed policemen. Security of the convoy and Mr. Quintana’s personal security was fully taken care of and he had no reason to be fearful of being attacked by a Buddhist crowd. It was just nonsense and a horrible lie.

The convoy reached the Bridge at 10:35 sharp and reached within five minutes the Communication Guesthouse which was more than half-a-mile from the Bridge. The convoy left the Guesthouse at 10:55. Most of that time Mr. Quintana was inside the car and there was not a single dangerous instance threatening his personal safety.”

The same police officer also added that Quintan’s convoy could have easily avoided the protesting crowd gathering at the Bridge by going into Meikhtilar by a different way when he came from Mandalay.

The security personnel had advised to enter Meikhtilar by the Thee-Gone Road instead of the Kan-Goung Road. But Mr. Quintana himself insisted on seeing the crowd waiting for him at the bridge and forced the convoy to head there instead of safer Thee-Gone Road.

Administrator’s Version of the Ugly-encounter 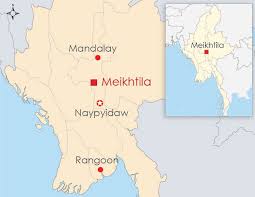 According to Tin Maung Soe the Meikghtilar District-Administrator UN’s Quintana either misunderstood or lied through his teeth about the car-banging incident as the so-called car-bangers were not the protesters but the plain-clothed security policemen standing right beside Qunitana’s vehicle as the policemen were just signalling the driver to drive through.

Tin Maung Soe was in the car right behind Qunitana’s car and this was his description of what he saw exactly that night.

“Local people were just trying to give him a letter. They were not hostile and they meant no harm to Quintana. The traffic blockage there lasted only about 3 minutes. Once the crowd surged towards Quintana’s car the plain-clothed police banged the car as a signal to drive through.”

According to him the letter to Quintana had following four points of local Buddhists’ grievances towards Quintana.

1. They wanted Quintan to leave Burma ASAP as he has been instigating the Bengali-Muslim illegal immigrants.
2. They demanded Quintana never to come back again to Burma.
3. They wanted Quintana to be immediately removed from his UN position.
4. They strongly denounced Quintana for deliberately making UN looks bad in Burmese people’s eyes.

But Tin Maung So accepted the fact that the locals were quite aggressive that night as they just wanted Quintana to know that they were extremely unhappy with his strong pro-Muslim and anti-Buddhist stance. 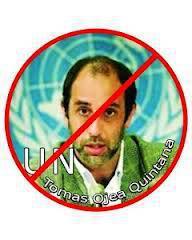 Wunna Soe is a leading reporter working for Eleven Media Group and he were in many dangerous instances during last March riots in Meikhtilar while reporting the explosive situations and trying to stop the massacre of Muslims by the local Buddhists. And he was in Meikhtilar again to report the arrival of Tomas Quintan in this August. Following was his witness account of what happened exactly that night.

“What I saw with my own eyes was that the protesting crowd just surged onto the road as the point car of Quintana’s convoy reached there. But they immediately discovered Quintana was not in that car. Straight away the police and local elders cleared the road for the convoy to drive away.

At later cars the crowd tried to surge forward again but the traffic police and the security police formed a line and prevented the protesters from approaching the cars. People were raising and pushing their placards so that Quintana could see their slogans like “Quintana Get-Out” and “Bengali-Instigator Quintana”.

Once the convoy drove away towards the Communication’s Guesthouse some hardcore protestors followed the convoy in about 20-30 motorbikes. Not more than 40 protestors, I guessed. Once near the guesthouse where the convoy had stopped for a while they started shouting stuff like “We don’t want Quintana” and “Get-Out, Quintana, Get-Out”.

One thing peculiar was that the convoy could have easily avoided the waiting crowd by using Thee-Gone Turn at Mandalay-Meikhtilar Road. Instead they chose to use Kan-Goung Turn and ran head-on with the protesting crowd and things turned out quite ugly. Who made that bad decision? I have not a clue!”

According to some Burmese and foreign reporters at Quintana’s press conference in Rangoon Airport on August-21 just before he left Burma for Thailand our Tomas Quintana appeared to be extremely emotional while recalling his so-called life-threatening incident at Meikhtilar.

They are now afraid that he will be pushing with his extremely-negative report to coming UN General Assembly for more intensive pressure on Burma from the Multinational Muslim Mafia OIC (Organization Of Islamic Cooperation) at UN.

Tomas Quintana has been repeatedly calling for the repeal of Burma’s 1982 Citizenship Act so that the millions of illegal Bengali-Muslims now waiting on the Bangladeshi border will become Burmese citizens.

That is the exact reason why every Burmese Buddhist hates Quintan from their guts, for that 1982 Citizenship Act is the only barrier stopping the millions Bengali-Muslims of Bangladesh from swallowing whole us Burmese-Buddhists.

And that is the very reason our senior government officials including the President U Thein Sein and the Army-Chief General Min Aung Hlaing had refused to receive Quintana personally despite his repeated demands to see them.

Burmese people and their government have totally lost confidence in UN's Tomas Ojea Quintana and his credibility is now absolutely zero in Burmese eyes. He should resign immediately his once-very-important post which itself is no longer appropriate for newly democratic Burma, period. 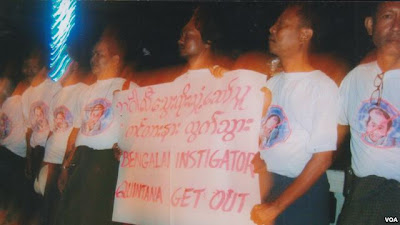 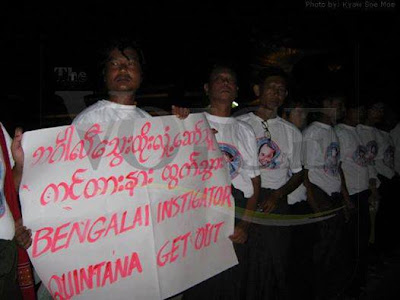 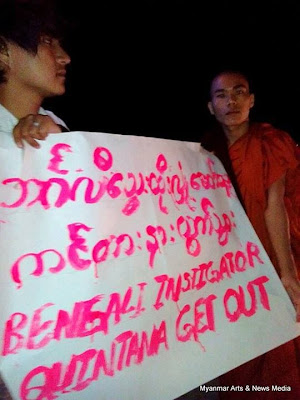