He's a self-proclaimed "white American national" who has no family connections to Myanmar and has never visited the country. He's not an expert on its politics either, he tells me -- which becomes clear later in our conversation when he draws a blank on the name of Aung San Suu Kyi, likely the most famous Burmese person alive today, whom he calls a "prime minister candidate" (she's actually planning on staging a run for the presidency).

But something about the 969 movement -- the controversial pro-Buddhist campaign that many hold responsible for the violence that has racked Myanmar in recent months -- has captured the imagination of this man.

Based in the San Francisco Bay Area, working his day job in the "technology sector," he has taken it upon himself in his spare time to set up both a website -- 969Movement.org -- and a Twitter account devoted to defending the movement in the face of what he says is widespread misinformation.

In a Skype interview with Foreign Policy on Wednesday, he declined to give his name, saying "I still have some safety concerns about being involved in all this."

"Where I see myself ... is promoting the values and the intention of the 969 movement to the English-speaking world," he says. "To a more globalized audience."

It's also well known for the vehemence of its leaders' rhetoric: "You can be full of kindness and love, but you cannot sleep next to a mad dog," U Wirathu, the charismatic monk often described as the face of the movement, has reportedly said about Muslims.

It's the kind of divisive rhetoric that many argue has contributed to the sectarian clashes and mob violence that has rocked Myanmar over the past year, killing hundreds, displacing thousands and destroying hundreds of acres of property. Some claim that the movement is receiving tacit backing from the state.

But the Californian is skeptical of the 969 movement's role in this violence. Those doing the translating for Western media organizations aren't neutral observers, he says, but rather people with an anti-969 agenda. What he sees in 969 are the seeds of a global pro-Buddhist movement that can give Buddhism and its values a collective voice.

"What Buddhists need today, in the 21st century is a united message and presence that exists in the public sphere," he says. Just as there have been efforts to build pan-Arabism, he says, "Buddhists should have a nation too."

The message that Buddhists are under threat and need to stand up for themselves has found resonance in other Buddhist countries in South and Southeast Asia, but it's unusual to find an American pushing for a movement toward a more political Buddhism and supporting a campaign that's been widely criticized outside of Myanmar.

(His connections to the 969 movement, it should be noted, are only ideological -- at least so far. He's reached out to the leadership in Myanmar for their blessing, but has yet to hear back, he says.) In addition to supporting the 969 movement, he's also the founder of a website called BuddhistDefenseLeague.org. 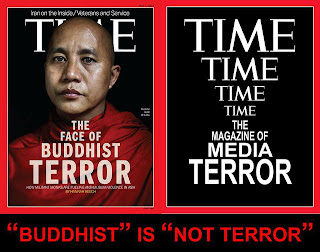 The man says he was raised in a Christian family, but developed an interest in Buddhism as a teenager. He began practicing more seriously a few years ago, he says, and "the peace ... it's given me -- I take it very seriously." He found videos of Wirathu on YouTube, and found that the monk appealed to him. "Even as a small man, he appears to have a great deal of charisma.... I look forward to meeting him one day."

He says he was prompted to start his website and Twitter account in response to a controversial Time magazine issue that put Wirathu on the cover, above the headline, "The Face of Buddhist Terror."

"It was one-sided, disrespectful of my religious beliefs. I thought, I could do something about this."

His site includes a section that seeks to dispel 969 "myths" ("There have been many attacks against Buddhists in Myanmar that have gone unreported in the Western media. Myanmar, like many other countries in the world, has a long history of Islamic terrorists killing, raping, and destroying.") and short blog posts on why, for example, it's important to shop at Buddhist stores to support monks ("By displaying a sticker or poster, a business and home could indicate that it was owned by a Buddhist and that they supported the 969 values of Buddhism. For the first time Buddhists in Myanmar were able to recognize who their money was supporting").

His Twitter feed is a steady stream of debate with those who are offended by his backing of an organization they consider hateful, or who accuse him of making misleading characterizations of the movement.

"To re-frame '969' as a peaceful push for getting Buddhist voices heard ... is a complete distortion," Maung Zarni, a Burmese dissident in exile who is currently a fellow at the London School of Economics, said in an email to Foreign Policy. The creator of 969Movement.org "is not really in touch with the extremely troubling and ugly ideological and material impact of the 969 [movement] as it is understood and framed by its fast-growing adherents."

The website has only been up for about two weeks; the Twitter account has just a few dozen followers. But the creator says he's already received emails from supporters -- mainly in Southeast Asia, though also a few Buddhists in the United States.

He's been in talks with another Buddhist website about producing a pro-969 magazine, and he hopes to win over more supporters in the United States by distributing the kinds of stickers that Buddhists in Myanmar place on their cars, motorcycles, and store windows. His plans eventually include founding a non-profit. Only then, he says, will he reveal his identity.

He doesn't expect that it will be easy to find support in the United States. "Most Western Buddhists believe what they read in the Western media, and will not be supportive of it," he says.

But the time has come, he says, for Buddhists around the world to take a stand on behalf of their religion and culture.

"I feel like we're at an important threshold right now," he says. "Either we stand up, as Buddhists, and accept these criticisms, of being divisive, and setting ourselves apart -- because it's true, we are not like other people, we have different values and different traditions" -- or Buddhism may "lose the fight."

"Bullies like to pick on an easy target," he said. "That might not be politically correct for the Dalai Lama to hear."
Posted by Hla Oo at 3:16 PM