Quintana, His Bengali-Muslims, and Their Camp-Riots


Tomas Ojea Quintana the United Nations Special Rapporteur on the human rights situations in Burma is now in troubled-Arakan since August 11. He is hated by the native-Buddhist Yakhines for his extremely-biased stance against Buddhists but loved by the illegal Bengali-Muslims originally from Bangladesh for his favouritism towards them.

Since last year Muslim-Buddhist riots in the Arakan most of them Bengali-Muslims (so-called Rohingyas) have been herded into various refugee camps by the Burmese security forces and they were ready to ignite another set of riots again to show the world their plights through their man Tomas Quintana.

The result was another set of violent incidents between Bengali-Muslims and the security police forces widely known as Lone-htains the militarized police battalions established to maintain the law and order in Burma’s trouble spots like the Arakan.

A Bengali Corpse Drifting Into the Mhansi Creek

The troubles started when a rotten Benglai corpse drifted into the Mhansi Creek near the Ohndawgyi Bengali Camp near Sittwe City on August 9. According to the local Buddhists the Bengali corpse appeared to be in the water for a considerable time and he was possibly a drowned victim from a Bangladeshi boat sunk recently in the nearby waters.

But the Bengali-Muslims from nearby Ohndawgyi Camp were spreading the malicious rumours that the corpse was of Roshi (34) one of their two Muslim men arrested and killed by the Lone-htains on August 8 while they were fishing in the creek. 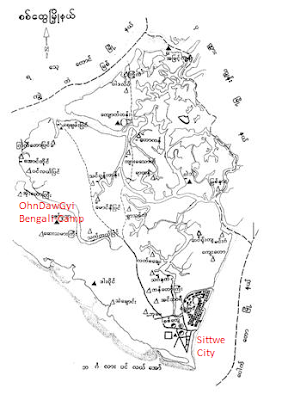 So when the policemen from nearby sentry-post came to the site and fished the corpse out to take it to the hospital for forensic examination and identity check the Bengali-Muslims gathered at the creek bank tried to stop them policemen. They wanted to take the corpse inside their camp to bury it immediately. The police refused their demand and the violence suddenly broke out on the creek banks.

A Bengali named Larlan suddenly attacked and injured Deputy-police-inspector Htay Win as the large Bengali crowd surged forward. Policemen had no other choice but to shoot back as their lives were seriously threatened. By then the Bengali crowd was more than 500 and police were only a few men armed only with bolt-action rifles.

As the police contingent withdrew to safety the 1,000 strong Bengali-Muslim mob looted their outpost of all the valuables and weapons and foodstuff and later burned down three abandoned-police-buildings there.

They then dug many a large holes and bobby-trapped the main and only road between Ohndawgyi and Bawduphat refugee camps so that the police reinforcements from Bawduphat couldn’t reach the police now trapped by Bengali-Muslim mobs at Ohndawgyi.

“What these Bengalis are doing now is creating more security problems. We believe they are doing that intentionally by timing with their Quintana’s arrival here. Police are just doing their job and the Muslims don’t need to be hostile to the police. We Yakhines are really sick of these Bengali hostilities and it is nearly impossible to accept back them into pur community as our confidence is eroding more and more,” bitterly said U Win Myaing from the Yakhine State Government.

At present two Police battalions are at the site and the trapped policemen had been already rescued. Two of the Bengali-Muslims wounded in August-9 shootings died at the Sittwe General Hospital. One was Jormal Hussein (50) with a chest wound. He died on August 11 and immediately buried at the Ohndawgyi Muslim Cemetery. 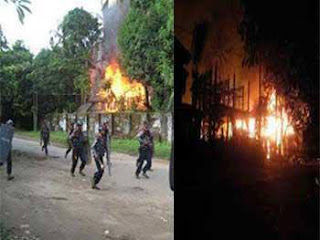 The shootings at Ohndawgyi provoked the Bengali-Muslims at Bawduphat Bengali Camp and about 500 strong Bengali mob gathered there to protest on August 10. The UNHCR office manager Mr. Oliver and two of his foreigner staffers and two Bengali interpreters tried to listen to their grievances to quell the crowd.

The UNHCR officials relayed to them the particular demand from the Bengali-Muslims to replace the police battalions at their camps with Army battalions as Bengalis had more confidence in the soldiers than the Lone-Htain police.

The government people there told them it was impossible to satisfy their demand as UN’s Quintana himself was calling for the replacement of soldiers by the police as maintaining law and order was the job of police.

Meanwhile about 500 more Bengali-Muslim men came up from the Ohndawgyi camp and the gathering mob grew to more than 1,000 Bengali-Muslims at Bawduphat Camp. They refused to disperse and finally attacked the security police with sticks, swords, bricks, and metal slingshots known as Gingalee.

Finally the security police fired at them and wounded at least 7 Bengali-Muslims. The mob then withdrew back about 100 yards from the line of security police and watched the situation without dispersing.

More reinforcement of police arrived and finally at about 7 in the night the crowd dispersed and situations at the Bawduphat camp were back to normal. The seven wounded were later sent to nearby Dabine Hospital managed by the MSF volunteer doctors but one Bengali-Muslim died at the hospital.
Quintana’s Arrival at Sittwe

Quintana’s last human rights report on Burma to UNGA was protested by both government and people of Burma as it was blatantly pro-Bengali Muslims and anti-native Buddhists of Burma.

Especially his demand to repel Burma’s 1982 Citizenship law and give a million of illegal Bengali-Muslims at the border immediate Burmese citizenship was universally condemned by both the government and the people of Burma. Burmese consider his demand a blatant intrusion into Burma’s domestic affairs and disrespect to Burma’s sovereignty.

During this trip of Quintana many Yakhine-Buddhists lined-up and protested along his route and arrival points in Arakan by carrying the posters displaying “Quintana, Get Out!” and shouting “Bengali Instigator, Go Away!” and "Qunitan, we don't need your biased suggestions!" 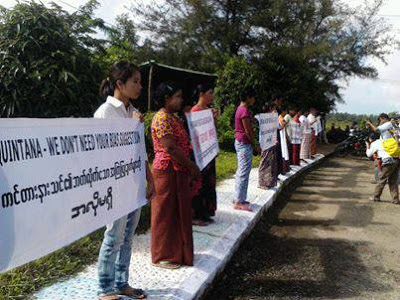 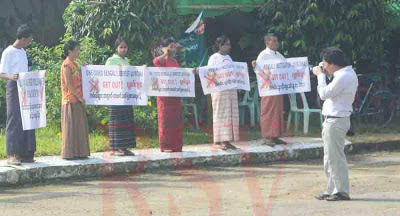 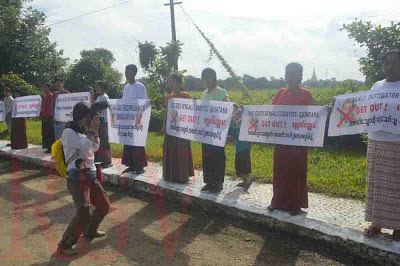 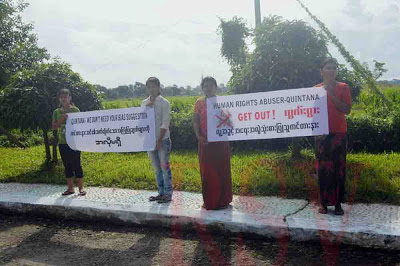 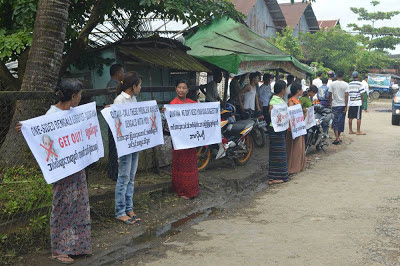 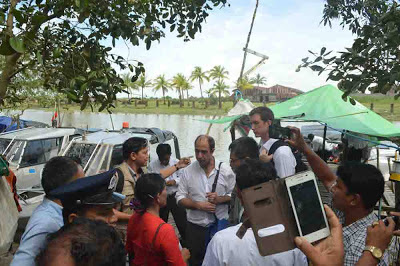 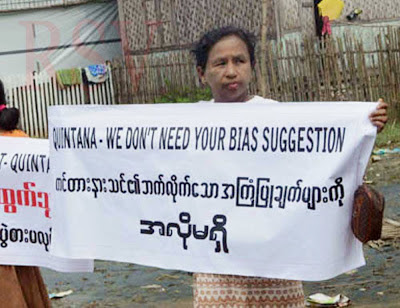