(Enhanced translation of Major Ye Moe’s “Tatmadaw What, Tatmadaw Where – 22”.)

On 6 November 2005 Burma’s military government abruptly moved the administrative capital of Burma from Rangoon to a remote area - 2,723 square miles wide between Shan Yoma and Yegu Yoma ranges - at about 200 miles north of the former capital city of Rangoon.

Even though the actual construction of the new capital city Nay Pyi Daw has been going on quietly since 2002 by at least 30 large construction companies the strategic plan to build the new administrative centre had been secretly drawn up since 1995-96 by the Burma’s ruling military.

Even though costing at least US$ 20 Billion after spending a considerable portion of Burma’s national budgets the Nay Pyi Daw mega-project has been an ideal capital most country’s armed-forces can only dream of.

Strategic Reason For the Relocation of Burma’s Capital

The nuclear-armed US Seventh Fleet was in Burma’s territorial waters and the fleet’s Amphibious-Assault-Ship USS Belleau Wood was ready to land its 3,000 strong Marine Division in Rangoon while the one-million strong and also-nuclear-armed South-Western Army of PLA with its Rapid-Armoured-Division ready to march to Mandalay was amassing across Muse on the China border if US ever made the first move.

Also the annual Cobra-Gold military exercises by US and Thai militaries in neighbouring Thailand were really unsettling for Burmese Army.

Especially the main exercise of special-forces operation of attacking and occupying a strategic location – geographically very similar to Rangoon – in Thailand aided by Naval and Air supports was really unnerving the Burmese military strategists and planners.

Rangoon was conveniently accessible by sea from the down south and thus extremely vulnerable. British used that weak point in their successful First Anglo-Burmese War in 1824. With a small landing force supported by a powerful naval fleet British took Rangoon in a surprise attack on 5 May 1824 and occupied Rangoon first and then gradually the whole Burma for very long time till 4 January 1948.

The sudden grinding-stop of administrative-machinery by lawless-anarchy during the failed 8-8-88 (Four-Shit) Uprising had also given the Burma’s military a reason to find a new capital which would not be vulnerable to similar threats posed by the political and social unrests in the future.

For all those reasons Burma army decided at that time to relocate the administrative capital to a strategic-and-safer location so that the parliament, high court, government, and especially the war office could be relocated away from the major population centre Rangoon. 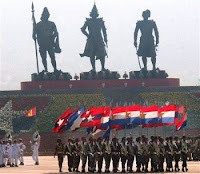 From security point of view alone the fortress Nay Pyi Daw is impenetrable. A new light infantry division has been specially established and assigned for the security of new capital filled with fortified underground-caverns and tunnels.

Nay Pyi Daw is also protected by advanced radar systems together with stationary and mobile air-defence-missile systems capable of covering 50 miles radius round the capital. In addition more SAM missile batteries and infantry divisions have been positioned along all access roads in and out of Nay Pyi Daw.

The biggest military camp in Burma Meikhtilar with armoured divisions and long-range artillery divisions is only 75 miles away from the new capital. The Shande air-force base with latest Mig jetfighters squadrons is also at Meikhtilar to protect Nay Pyi Daw.

Since Nay Pyi Daw is more than 200 miles away from the nearest sea any possible amphibious-landing threats are all but eliminated, and any internal disturbances in Rangoon will never directly affect the proper functioning of a Burmese government again.

Unless a direct attack from a superpower like United States or China any other threats from the neighbouring nations like Bangladesh or Thailand can safely be eliminated. That is the beauty of our Nay Pyi Daw the brilliant-brainchild of former Senior General Than Shwe.

Army has accepted that the price tag US$ 20+ billion was extremely expensive for a very-poor nation like Burma and the Nay Pyi Daw mega-project would never have been implemented under any democratically-elected civilian government.

But the bitter experiences during last 40 years of civil war and civil strives had basically forced army to put clear preferences on National security over other social, commercial, health, and education sectors and Burmese military believed that people of Burma would understand and accept that Pain-and-Gain policy eventually within next few decades.

Burma army has truly accepted the fact that ongoing civil war must end to improve the living standard of the people of Burma. And to end the civil war the negotiations with the armed-ethnic insurgent organizations must be continued.

And the ultimate success for these negotiations relies totally on the fair and agreeable sharing of power and natural resources between the future civilian government of Burman-majority Mainland and the ethnic-majority States.

At the same time the army also understands very well the fact that without a strong and powerful armed-forces behind a civilian-controlled Burmese government the ethnic insurgents with substantial foreign backing will be ever bringing unfair demands to the negotiation tables.

Such demand like hardliner-Shans' push to reorganize present seven divisions of Burma-proper to a single Burman State will never be tolerated by the Burmese majority and their army.

Recalcitrant KIA (the so-called Kachin Independence Army) had bitterly tasted that big stick just last year and they are now back at the negotiations table.

By 2007-2008 our army has reached the final stages of that grand strategy the brainchild of former SG Than Shwe. Since then army has been implementing a very successful retreat or withdrawal back to the barracks.

In war, for any retreat to be successful the withdrawing forces must implement sound defensive steps so that the enemy forces do not have the chance to attack or even disturb them. Sometimes the retreating forces must even stage small-scale counter-offensive operations to kill the enemy’s momentum in chasing after them.

The 2008 Constitution is one of those major defensive lines for the army to be able to maintain the physical integrity and the sovereignty of our beloved Union of Burma. Especially the section absolutely mandating 25% of the total members of parliament to the army.

So if the civilian MPs from opposition parties such as NLD and various ethnic parties of future parliaments try any attempt to weaken the army such as cutting substantially the military expenditures in the budget they will not be able to do so.

(Blogger's Notes: I was born in a CPB's field hospital inside then-very-remote Pa-Lway Kyo-waing on Pegu-Yoma Ranges in 1956 and that exact area now is cleared and developed as part of Burma's new capital Nay-pyi-daw. I even think Burma Army's War Office now is right at that spot where I was born. Thus I am very happy and excited to claim myself as a Nay-pyi-daw born Burmese. Bravo and cheers!)