(John Carney’s article direct from The BREITBART NEWS on 08 March 2017.) 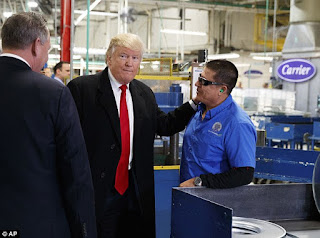 Trump Jobs Boom Shows Americans Were Right and the Experts Were Wrong: The economy added nearly 300,000 private sector jobs in the first full month of Donald Trump’s presidency–blowing away the expectations of economists and defying many so-called experts who predicted Trump’s presidency would lead to an economic slump.

Employment in the private sector rose by 298,000 jobs in February, according to ADP and Moody’s Analytics. Economists surveyed by ADP had expected 190,000 jobs. President Trump ran a campaign that promised job creation–and the American people strongly believed Trump would be better on jobs than Hillary Clinton.

Expert opinion, however, was certain a Trump victory would kill jobs and cause a recession. “The trade deficit will get larger and that means overall, you might save 100 jobs at Carrier, but overall the jobs in manufacturing we lost will get worse,” Nobel prize-winning economist Joseph Stiglitz (stupidly) told CNNMoney in January.


“If [Trump] is elected, I would expect a protracted recession to begin within 18 months. The damage would be felt far beyond the United States,” former Treasury Secretary Larry Summers (foolishly) wrote in a June 2016 op-ed in the Financial Times.

Summers was singing the same tune as recently as January. Speaking at the World Economic Forum in Davis, Switzerland, Summers warned that Trump’s policies would strengthen the Mexican peso against the U.S. dollar–and as a consequence cost thousands of U.S. jobs.

“It is a major change in the relative attractiveness of locating production activity in Mexico, versus locating it in the American heartland, and the consequence of that is measured not in the dozens or hundreds, but in the thousands or ten thousands or even hundreds of thousands of jobs,” he said, according to a CNN Money report.

Citigroup’s economists were perhaps even more gloomy. “A Trump victory in particular could prolong and perhaps exacerbate policy uncertainty and deliver a shock (though perhaps short-lived) to financial markets,” a team led by Citi Chief Economist Willem Buiter wrote in note reported on by Bloomberg News. “Tightening financial conditions and further rises in uncertainty could trigger a significant slowdown in U.S., but also global growth.”

Simon Johnson, the prominent Massachusetts Institute of Technology economist, argued that a “big adverse surprise – like the election of Donald Trump in the US – would likely cause the stock market to crash and plunge the world into recession.”

Even when the stock market soared after Trump’s election, many were quick to point out that the “stock market isn’t the real economy” and that financial markets often appear to be irrational (Stocks always lead the economy, stupids). Perhaps investors were happy because corporate earnings would benefit from tax cuts, some speculated, but Trump’s voters were bound to be disappointed when jobs failed to materialize.

Today’s jobs numbers are, however, the real economy. And they demonstrate that the notion that Trump’s policies–or mere uncertainty around policy making–would kill jobs appears to have been far off the mark. Far from pulling back, businesses hired just about the maximum number possible in a single month. 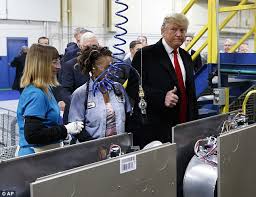 Dive deeper into the numbers and it becomes even clearer that Trump and the American people were far more prescient than expert opinion. While lower-productivity service-sector jobs dominated many past jobs reports, this report shows a notable shift toward a more balanced economy.

Services added 193,000, with 66,000 coming from professional and business services. Goods producers added 106,000 jobs. Construction jobs grew by 106,000. Manufacturing jobs grew by 32,000. So much for the idea that America cannot grow its manufacturing sector again.

The health care sector was one supposed to be particularly hard hit. “As many as 200,000 jobs may be lost in the health-care sector over the next year and employers will slow investment as they wait to see Trump’s clear plan for reform, according to Chris Rupkey, chief financial economist for Bank of Tokyo-Mitsubishi UFJ Ltd. in New York,” Bloomberg News reported in December.

Instead, the economy added 38,000 health care jobs in February. “February proved to be an incredibly strong month for employment with increases we have not seen in years,” Ahu Yildmaz, co-head of ADP Research Institute, said in a statement about the February report.

One of the things that was supposed to make robust job growth nearly impossible under Trump was the already low unemployment rate, which supposedly would make it impossible to produce the kinds of job growth Trump had promised. As a candidate, however, Trump argued that the unemployment rate was under-estimating the true state of joblessness in the country–and therefore the potential for renewing American job growth.

February’s job surge is even more extraordinary in light of widespread expectations that the Federal Reserve will raise interest rates when it meets next week. Interest rate hikes are generally seen as putting the brakes on the economy. Indeed, the prospect of rising rates was often cited by Trump’s critics as one of the reasons his jobs promises would fail.


Of course, this is merely one month’s data. Without a doubt, future jobs reports will come in with less eye-popping numbers. Some may even disappoint expectations. But February’s numbers make clear that employers in the U.S. don’t foresee a slump coming. They see a boom coming and are hiring as fast as they can to be ready for it. 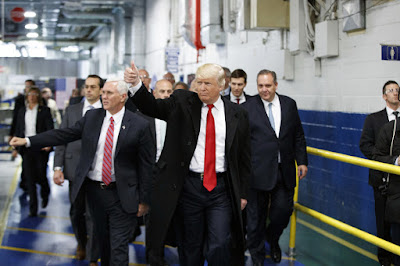 ADP is a payroll processing firm, they're the people who work out how much you should actually get in your paycheck after tax, FICA, deductions for that unfortunate loan agreement, the ex-husband's demands and all that. They do this for a large enough portion of the economy that they have a good insight into what is happening out there in the employment world in something like real time.

They don't cover everyone, not at all, but they cover a large enough and stable enough section of the population that changes in their work can be translated into changes in the overall market. So their numbers are a useful little insight into what we think the real employment numbers will be on Friday from the Labor Department:

Hiring by U.S. private employers surged in February, suggesting that the economy remains on solid ground even as growth appears to have slowed further in the first quarter. The ADP National Employment Report showed on Wednesday that private payrolls grew by 298,000 jobs last month, well above economists' expectations for a gain of 190,000. January's private payrolls gains were revised up to 261,000 from 246,000.

Those are good numbers. And the next step is fairly obvious too: Yet the large gain in the ADP figures will likely raise economists’ expectations for the government’s report. That report will be the final major economic data that Federal Reserve officials will see before their March 14-15 meeting, when they are widely expected to raise short-term interest rates for only the third time in nearly a decade.

A rate hike will be even more likely if the government’s data reflects strong hiring similar to the ADP report. Many economists say job gains would have to plummet to roughly 50,000 or less to give the Fed pause.

No, it's not true that surging employment causes inflation, not at this stage at least (wage driven inflation might indeed exist but it would be in a very much tighter market than this). However, this sort of jobs growth is consistent with there being little spare capacity in the economy and that could indeed drive inflation.

That's why the Fed's possible (OK, probable to near certain) rate rise later this month. Not because employment is rising but because we appear very close to full capacity in the economy. At which point stimulus, whether fiscal or from low interest rates, doesn't help very much, far too much of whatever stimulus there is will feed through into inflation. Thus, near or at full capacity, raise interest rates.

That's the surprising part of it. The sectors where the jobs were added. Given that Donald Trump hasn't changed the law in any manner as yet that's obviously not the explanation, his election. Given a rising dollar we'd not expect manufacturing to be adding jobs, not unless we really are booming. And thus, given that we do have a rising dollar, we must conclude that we are booming.
Posted by Hla Oo at 2:09 AM