(Zaid Jilani article direct from The INTERCEPT on 22 March 2017.) 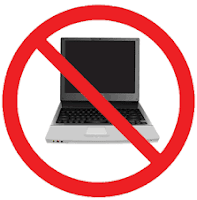 Donald Trump’s Muslim Laptop Ban Could Be a Protectionist Scheme: The Department of Homeland Security announced an unprecedented new restriction on travellers from 10 airports in eight Muslim-majority countries on Tuesday.

The DHS restriction states “that all personal electronic devices larger than a cell phone or smart phone be placed in checked baggage at 10 airports where flights are departing for the United States.” It’s a Muslim laptop ban.

The 10 airports are in Jordan, Egypt, Turkey, Saudi Arabia, Kuwait, Morocco, Qatar, and the United Arab Emirates. American-based airlines do not fly directly to the United States from these airports, so these restrictions will not apply to them.


The impact of this move will instead fall on nine airlines, including Gulf-based carriers that U.S. airlines have been asking President Trump to punish since the day after his election. The U.S. carriers have long complained that Gulf carriers such as Emirates, Etihad Airways, and Qatar Airways are unfairly subsidized by their national governments.

Executives at Delta Airlines, United Airlines, and American Airlines met with Trump in early February. The day before the meeting, a group representing these American airlines, called the Partnershipfor Open & Fair Skies, distributed a slick video using Trump’s own words to argue against the subsidies.

With this new travel impediment, Trump may be throwing these executives a bone. The new restrictions appear to be targeting airports that serve as flight “hubs” for these airlines — such as Dubai International, which is the hub of Emirates. Airlines use these hub airports to transfer passengers between flights, delivering significant savings.

California Democratic Rep. Adam Schiff, who is the ranking member of the House Intelligence Committee, quickly rose to the defense of Trump’s DHS on Tuesday, calling the restrictions both “necessary and proportional to the threat”:

In 2015, Schiff was one of 262 Members of the House who signed a letter protesting subsidies for the Gulf airlines. The letter is featured on the website of the Partnership for Open & Fair Skies.

Whatever the motivation, the security justifications are unclear at best. The Guardian interviewed a number of top technologists about the new policy on Tuesday, and they were puzzled. “If you assume the attacker is interested in turning a laptop into a bomb, it would work just as well in the cargo hold,” Nicholas Weaver, who is a researcher at the International Computer Science Institute, told the paper.

“From a technological perspective, nothing has changed between the last dozen years and today. That is, there are no new technological breakthroughs that make this threat any more serious today,” Bruce Schneier, a top technologist at the Berkman Klein Center for Internet & Society at Harvard University, told the Guardian. “And there is certainly nothing technological that would limit this newfound threat to a handful of Middle Eastern airlines.”

The United Kingdom enacted similar restrictions hours after the United States, but with two puzzling differences. The U.K. ban includes 14 airlines, including six based in the U.K. And it does not include airports in Qatar or the UAE — which are the epicenter of the subsidies dispute. Canada is reportedly weighing its own restrictions.

For its part, Emirates responded by inviting customers to sample its in-flight entertainment in lieu of tablets and laptops — by repurposing an old advertisement featuring Jennifer Anniston. 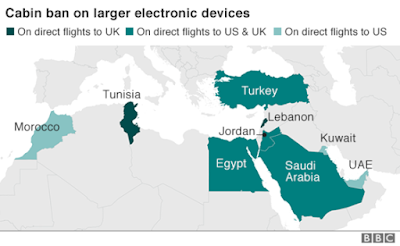 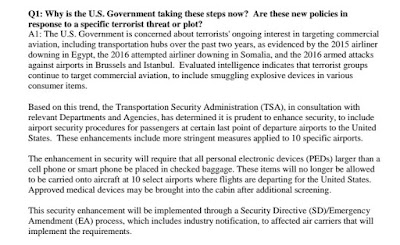 JUST BEFORE U.S. airline industry CEOs met at the White House with Donald Trump on Thursday, the big three carriers — Delta, United and American — released a video featuring some of Trump’s populist rhetoric about “trade cheats” and directing viewers to a website for a lobbying campaign to “protect American jobs.”

But the campaign, called the Partnership for Open & Fair Skies, is in reality a cutthroat bid to block certain Arab airlines from U.S. airports — a decision analysts say would limit the choices for consumers while increasing market consolidation for the big three.

This comes after a similar request for protection during the Obama administration — which sought to prevent foreign competitors from offering lower prices — was largely rebuffed. But now that there’s a president who has promised to crack down on foreigners, the airlines are at it again, hoping to harness “America First” rhetoric for profiteering protectionism.

The day after Trump won the election, the Partnership for Open & Fair Skies campaign issued a statement saying, “We look forward to briefing President-elect Donald Trump and his new administration on the massive, unfair subsidies that the UAE and Qatar give to their state-owned Gulf carriers.”

Jill Zuckman, a managing director at SKDKnickerbocker, the public relations firm helping to orchestrate the partnership, did not respond to a request for comment from The Intercept.

The big three U.S. airlines maintain that Emirates, Etihad Airways, and Qatar Airways — airlines backed by governments of Qatar and the United Arab Emirates — are unfairly subsidized and that their expansion into the U.S. market represents unfair competition that should be blocked by regulators.

“The Gulf carriers have received over $50 billion in documented subsidies from their government owners since 2004,” the chief executives of the big three wrote in a recent letter to Secretary of State Rex Tillerson.

“Mr. Secretary,” the letter continues, “we are confident that the Trump Administration shares our view on the importance of enforcing our Open Skies agreements, ensuring that U.S. airlines have a fair and equal opportunity to compete in the international market, and protecting American jobs.”

But the Gulf carriers counter that they provide flights to the Middle East, Europe, and India that have been long ignored by U.S. airlines and that the charge of unfair subsidies is boldly hypocritical given the tens of billions dollars in subsidies granted to the airline industry by various U.S. government agencies for decades.

Travel industry writer Gary Leff scoffs at the lobbying campaign, arguing on his blog Boarding Area that the “U.S. airlines are highly subsidized, and subsidies do not in any way violate our treaties.” Leff has previously detailed the ways in which the U.S. airline industry receives far more government subsidies than their Middle East competitors.

Leff notes, citing a 1999 Congressional Research Service study, that the U.S. government has provided subsidies to airlines worth over $150 billion to purchase commercial jets, to serve remote communities, in the form of state and federal fuel subsidies, in the tax code, and through military and postal flights, among other generous programs since 1918.

Qatar Airways in a 2015 filing, listed the subsidies that benefit the U.S. airlines. It noted that U.S. carriers have received upwards of $30 billion alone in cost savings from Chapter 11, using the bankruptcy system to restructure, offloading pension obligations and other liabilities to the taxpayer. The filing argues that Qatar’s services are vital and that their flights offer “one-stop travel options to cities and parts of the world that never have been served by U.S. carriers.”

Meanwhile, recent studies show that market consolidation has led to increased profits for the industry and higher prices for consumers. But the blatant hypocrisy of the big three is eclipsed in Washington by a formidable lobbying apparatus.

United, Delta, and America, along with their trade group Airlines for America, spent over $20 million on federal lobbying last year. Lobbyists on retainer include former senators John Breaux and Trent Lott.

SKDKnickerbocker, the firm managing the campaign, is run by senior Democratic operatives including Anita Dunn, Obama’s former White House communications director. The airlines have also enlisted their respective unions, with the powerful Airline Pilots Association working to advance the campaign to block the Gulf carriers.

They have also used nativism to push the campaign. In 2015, at outset of the campaign to pressure the Obama administration to squeeze out foreign competition, CNN’s Richard Quest asked Delta Airlines Chief Executive Richard Anderson about Gulf carriers’ claims that the big three received favorable government treatment using bankruptcy protection.

Invoking 9/11 to attack the Gulf carriers makes no sense beyond an appeal to bigotry. None of the 9/11 hijackers were from Qatar. Two were from the UAE, but the vast majority — 15 — were from Saudi Arabia, the home of state-subsidized airline Saudia, which is a Skyteam partner with Delta Airways. Saudia has not pushed to compete directly with the big three, and therefore has not been targeted by the Partnership for Open & Fair Skies.

During the meeting Thursday, according to pool reports, Trump discussed changes to the air-traffic-control system and upgrades to airports. The chief executives of United, Delta, Southwest, Alaska, and executives from airport operators were among the participants. But the campaign to block Gulf carriers has gained new urgency.

In recent weeks, the Partnership for Open & Fair Skies lashed out at Emirates for opening a flight between Athens and Newark, a route that United plans to operate as a seasonal flight from May 24 to early October. The Partnership claims that the route is a violation of U.S. treaty agreements, and is asking regulators to block the competitive route.


“We look forward to working with President Trump and his team to enforce these agreements and protect American jobs — something that the Obama administration failed to do,” Zuckman told The Street in January. 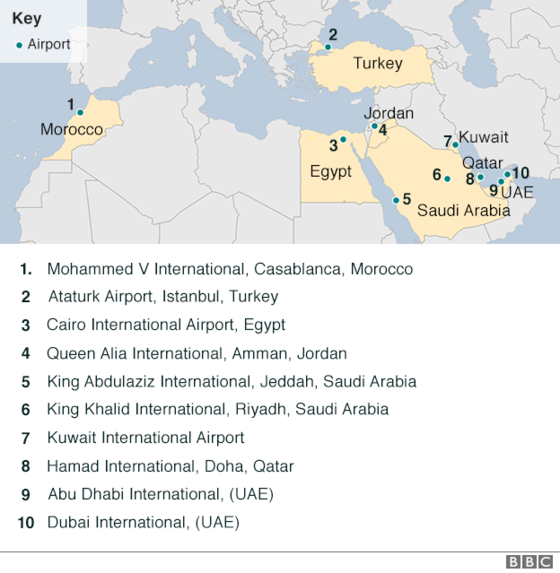