(Ciro Scotti’s articles direct from The FISCAL TIMES on 15 March 2017.)

F-35s and Navy SEALs: Trump’s Powerful Warning to North Korea. In a show of massive military might in and around the Korean peninsula, the Trump Administration is sending a powerful warning to the erratic – and some would say lunatic – regime of Kim Jong-un in North Korea: Back off.

Even as the Republic of South Korea leadership remains roiled after the ouster of President Park Geun-hye in a corruption scandal that has rocked the country, the U.S. military and ROK army and navy are not just continuing with war games begun on March 1, but they are openly confrontational.

The nuclear-powered aircraft carrier USS Carl Vinson began plying the waters off South Korea today, according to a report by two Reuters reporters on board. To sharpen the point, F-35 Joint Strike Fighters – the $100 million jets that are the new centerpiece of American air power – are taking off from the flight deck.


Among the joint forces taking part in the exercise involving 300,000 ROK and almost 20,000 U.S. troops, are Navy SEALs, Army Rangers and members of Delta Force. Fox News is saying today that the Pentagon is denying multiple reports on Monday – based on a story from Yonhap News Agency -- that members of SEAL Team 6, which took out Osama Bin Laden, would also be involved and would be engaged in training aimed at “decapitating” North Korea’s leadership.

Last week, in an apparent response to the war games, North Korea fired four antiballistic missiles that landed in the Sea of Japan, some as close as 190 miles from the coast. The BBC says that’s the third time it has tested missiles since last August.  But the answer back to Pyongyang goes beyond continuing with the joint exercises.

The U.S. is positioning at least two THAAD anti-missile systems in South Korea, a move that led Beijing, which worries about the ability of the system’s radar to penetrate past North Korea and deep into China, to propose a moratorium on North Korea’s missile program in exchange for a termination of the war games. That proposal was rejected by Washington. 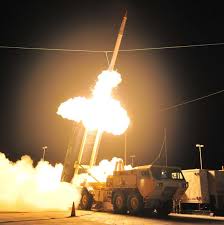 In addition, the U.S. is permanently placing a Gray Eagle attack-drone unit at Kunsan Air Base on the west coast of South Korea, Stars and Stripes reports. The Gray Eagle is an upgrade of the Predator and is used for surveillance, reconnaissance and targeting. It can stay airborne for up to 25 hours, the website of its maker, General Atomics, says and can carry as many as four Hellfire surface-to-air missiles.

Stars and Stripes quoted an unnamed South Korean military official as saying, “In case of a war on the Korean Peninsula, the unmanned aircraft could infiltrate the skies of North Korea and make a precision strike on the war command and other major military facilities.”

On Friday, U.S. Secretary of State Rex Tillerson is set to visit Seoul and meet with the acting president, Prime Minister Hwang Kyo-ahn. And in early April, China President Xi Jinping is scheduled to confer with Donald Trump at a two-day summit at the President’s Mar-a-Lago resort in Florida. North Korea is certain to be on the agenda of both meetings, but since China is Pyongyang’s main sponsor, the Xi visit is likely to be the most unnerving to the unpredictable Kim Jong-un.

Meantime, in what the South China Morning Post calls Japan’s “biggest show of naval force” since World War II, its helicopter carrier Izumo will cruise through the disputed waters of the South China Sea starting in May and will conduct joint maneuvers with U.S. and Indian naval forces in the Indian Ocean in July.

South Korean elections to replace disgraced President Park will also be held in May, and the favorite candidate is a liberal, Moon Jae-in, who was defeated by Park in 2012. Moon is said to be more open to reducing tensions with North Korea. But on Tuesday he cautioned China about the economic pressure it is imposing on South Korea, which some see as retaliation for deploying the THAAD anti-missile systems. 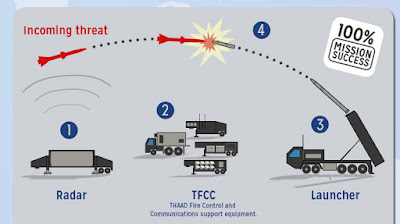 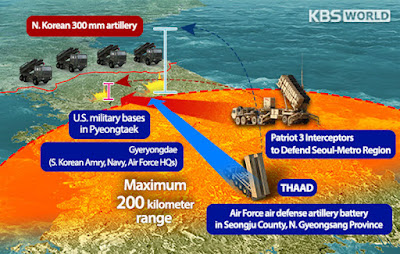 What Is THAAD? A $1.6 Billion US Missile System

What Is THAAD? A $1.6 Billion US Weapon That’s Going to Korea – and Worrying China: In an effort to calm the increasingly dangerous standoff between North Korea on one side and the U.S. and South Korea on the other, China on Wednesday proposed a solution aimed at a long-term reduction in tensions: Pyongyang puts its nuclear and missile programs on ice, while Washington and Seoul halt joint military exercises.

China appears to be a peacemaker, but it may be running scared to the bargaining table for two reasons. While the repressive dynasty that has ruled North Korea since the 1950s could not have remained in power without Beijing’s support, the current leader, Kim Jong-un, is acting more unstable than his predecessor and must be reined in before he ignites a new war on the Korean Peninsula.

The second reason is an acronym: THAAD. That stands for Terminal High Altitude Aerial Defense – the $1.6 billion-per-unit, anti-missile defense system that the U.S. began positioning in South Korea this week after North Korea fired four missiles on Monday said to be aimed at American bases in Japan.

The missiles were described by South Korean military and intelligence officials as a version of the Scud surface-to-surface ballistic missile. All four missiles fell into the Sea of Japan, but some came as close as 190 miles from the coast, according to Reuters.

One THAAD battery includes six truck-mounted launchers, 49 interceptors and AN/TPY-2 radar, according to DefenseNews. Raytheon, which builds the radar system for the unit in conjunction with Lockheed Martin, says it has “a record of flawless performance against all classes of ballistic missiles.”

But the radar’s accuracy and detection may be what China fears as much as the disruption of the balance of forces on the peninsula. The radar’s coverage could extend beyond North Korea and deep into China.

In an article written last year, when THAAD deployment was being considered, DefenseNews quoted a Chinese defense analyst as saying: “THAAD deployment could bring a severe shock to the security status quo that exists between China and the U.S., as well as with Russia.”

South Korea has been pushing for deployment of THAAD systems because its current missile defenses allow for interception at an altitude of only 9.3 miles. THAAD would increase that range to between 24.8 and 93.2 miles, and with both systems in place, there would be a double deterrent, the Seoul-based think tank Korea Defense & Security Forum told DefenseNews.

Chinese Foreign Minister Wang Yi on Wednesday said that Beijing’s intention was “to flash the red light and apply brakes” to the situation, The New York Times reported.  But as the Times pointed out, a 2015 proposal by North Korea for a moratorium on nuclear tests in exchange for a cancellation of joint U.S.-South Korea military exercises, which Pyongyang has called a prelude for invasion, went nowhere.

Beijing’s concern about Kim Jong-un may be more heightened than ever after the assassination of his estranged half-brother Kim Jong-nam in Kuala Lumpur and the execution of five of the North Korean leader’s top security officials with anti-aircraft guns because they “enraged” him with false reports.

The Times quoted Foreign Minister Wang as saying of the confrontation between North Korea and the U.S.-South Korea: “The two sides are like two accelerating trains coming toward each other, and neither side is willing to give way. The question is: Are both sides really prepared for a head-on collision?”

(Ciro Scotti, a journalist, editor and media strategist, is a contributing editor to The Fiscal Times. Earlier, he was Deputy Editor, The Americas, at Reuters and Managing Editor at Bloomberg Businessweek.)
Posted by Hla Oo at 10:26 PM