(Compilation of various articles on the Federal Judiciary from various sources.)

Article III of the Constitution requires the establishment of a Supreme Court and permits the Congress to create other federal courts, and place limitations on their jurisdiction. Article III federal judges are appointed by the President with the consent of the Senate to serve until they resign, are impeached and convicted, retire, or die.

Only 15 federal judges have ever been impeached and only eight have ever been convicted and removed (most recently,Judge Thomas Porteous of Louisiana in 2010).  The process of what is colloquially known as impeachment contains two steps.


The first step, the one that is technically the impeachment, is taken by the House of Representatives. By a simple majority, the House can vote to impeach a federal official. This process is akin to an indictment in an ordinary criminal proceeding.

Very few federal officials have ever been impeached, and even fewer have been convicted and removed from office. By way of example, President Bill Clinton was impeached by the House of Representatives, but he was not convicted by the Senate.

The federal courts are composed of three levels of courts:

The United States district courts (one in each of the 94 federal judicial districts, as well three territorial courts) are general federal trial courts.

The United States courts of appeals are the intermediate federal appellate courts. They operate under a system of mandatory review which means they must hear all appeals of right from the lower courts.

The Supreme Court of the United States is the court of last resort. It is generally an appellate court that operates under discretionary review, which means that the Court can choose which cases to hear, by granting writs of certiorari. There is generally no right of appeal to the Supreme Court. 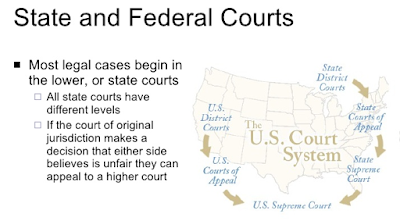 In July 2014, a three-judge panel of the United States Court of Appeals for the D.C. Circuit issued a ruling that threatened the future of President Obama’s Affordable Care Act. By a vote of two to one, the court held, in Halbig v. Burwell, that the insurance subsidies that allow millions of Americans to buy health insurance were contrary to the text of the law and thus were illegal.

If such a decision had been made earlier in Obama’s tenure, lawyers for his Administration would have been left with a single, risky option: an appeal to the politically polarized, and usually conservative, Supreme Court.

This year, the lawyers had another choice. When President Obama took office, the full D.C. Circuit had six judges appointed by Republican Presidents, three named by Democrats, and two vacancies. By the time of the Halbig decision, Obama had placed four judges on the D.C. court, which shifted its composition to seven Democratic appointees and four Republicans.

In light of this realignment, the Obama Administration asked the full D.C. Circuit to vacate the panel’s decision and rehear the Halbig case en banc—that is, with all the court’s active judges participating. The full court promptly agreed with the request, and the decision that would have crippled Obamacare is no longer on the books. Oral argument before the full court is now set for December.

The (left-wing) transformation of the D.C. Circuit has been replicated in federal courts around the country. Obama has had two hundred and eighty judges confirmed, which represents about a third of the federal judiciary. Two of his choices, Sonia Sotomayor and Elena Kagan, were nominated to the Supreme Court; fifty-three were named to the circuit courts of appeals, two hundred and twenty-three to the district courts, and two to the Court of International Trade.

When Obama took office, Republican appointees controlled ten of the thirteen circuit courts of appeals; Democratic appointees now constitute a majority in nine circuits. Because federal judges have life tenure, nearly all of Obama’s judges will continue serving well after he leaves office.

Obama’s judicial nominees look different from their predecessors. In an interview in the Oval Office, the President told me, “I think there are some particular groups that historically have been underrepresented—like Latinos and Asian-Americans—that represent a larger and larger portion of the population. And so for them to be able to see folks in robes that look like them is going to be important. When I came into office, I think there was one openly gay judge who had been appointed. We’ve appointed ten.”

The statistics affirm Obama’s boast. Sheldon Goldman, a professor at the University of Massachusetts at Amherst and a scholar of judicial appointments, said, “The majority of Obama’s appointments are women and non-white males.”

Obama said that the new makeup of the federal bench “speaks to the larger shifts in our society, where what’s always been this great American strength—this stew that we are—is part and parcel of every institution, both in the public sector as well as in the private sector.”

Beyond diversity, the story of Obama’s influence on the courts is more complex. Indeed, it could serve as a metaphor for his Presidency: symbolically rich but substantively hazy.

Obama took office after years of intense conservative focus on the courts. President George W. Bush spoke often of the need for judges who “will strictly apply the Constitution and laws, not legislate from the bench.” The conservative agenda included limiting abortion rights, ending racial preferences, and lowering barriers between church and state.

Obama’s Left-wing Legacy on Judicial Appointments, By the Numbers

"President Obama has had a stunning impact on the federal bench," said Kevin Judd, president of the National Bar Association, a network of some 66,000 black lawyers, judges, educators and law students.

Judd cited a study co-written by Robert A. Carp, a political science professor at the University of Houston which noted that the Commander in Chief elevated hundreds of African-Americans and other lawyers of color to the nation's federal courts. The more than 300 Obama-nominated judges are considered to be the most diverse group in U.S. history in terms of terms of gender, ethnicity, and nationality.

WASHINGTON, Sept. 7 (UPI) -- President Barack Obama has nominated a Washington lawyer who would become the country's first Muslim-American federal judge if he is confirmed. Obama nominated (Pakistan-born Muslim) Abid Riaz Qureshi Tuesday to serve on the U.S. District Court for the District of Columbia.

Qureshi is a partner at the Latham & Watkins law firm in Washington, specializing in false claims, healthcare fraud and securities violations, according to the White House. He has spent his entire career with the firm since graduating from Harvard Law School in 1997 and receiving his bachelor of arts from Cornell University in 1993.

Qureshi earned the Champions of Justice Award in 2012 by the National Law Journal's Legal Times for upholding the legal profession's core values through public service, pro bono work and advocacy for civil liberties.

"I am pleased to nominate Mr. Qureshi to serve on the United States District Court bench," Obama said in a statement. "I am confident he will serve the American people with integrity and a steadfast commitment to justice."

He must first be confirmed by the U.S. Senate, which halted any decisions on judicial nominations until after Obama's term ends in January. That includes Obama's Supreme Court nominee Merrick Garland seven months ago. (Qureshi nomination expired on January-3 this year.)

Republicans on Capitol Hill have, for nearly two years, pulled out every stop to block or delay many of President Barack Obama’s federal judge appointees from receiving senate confirmation. Now, it appears as though that obstruction is paying off for the GOP and President-elect Donald Trump.

Upon taking office on January 20, Trump is set to inherit dozens of vacant federal judgeships: 103 of them, to be exact. That’s in addition to the Supreme Court seat left open by the late conservative justice Antonin Scalia, the Washington Post reported.

The number is nearly twice the judiciary vacancies Obama inherited from President George W. Bush in 2009. When Obama assumed the role of president, there were just 54 federal judgeships to be filled.

Not only does Trump have the opportunity to populate the federal court system with conservative judges to serve lifetime appointments, he will assume office with a narrow Republican majority in the Senate, meaning that many of his appointments are likely to be quickly confirmed in the upper chamber — at least until the 2018 senate mid-term elections.

The appointments could fundamentally shape the courts for generations as judges appointed by Trump are all but certain to weigh in on hot-button issues like gun control, abortion, voting rights, anti-discrimination measures and civil liberties controversies.

As for who will fill the Supreme Court vacancy following the sudden death of Scalia in February, the Republican president-elect is looking for someone of “similar views, principles and judicial philosophies” as those of the late conservative justice.


In addition to blocking or delaying many of Obama’s appointments to federal judgeships, Senate Republicans took the unprecedented step of refusing to even hold hearings to confirm Obama’s eventual Supreme Court nominee Merrick Garland, even before he was named as the president’s pick to replace Scalia.