US A-10 Warthogs Vs Iranian Swarms Of Small Boats

(Compilation of articles from The STRATEGY PAGE & Other Sources in March 2017.)

The U.S. Air Force has revived an original mission for the A-10 ground attack aircraft; destroying small boats. Experiments have been conducted recently and, while no details were made public, the tests were considered successful.

There were basically two tests. One had had experienced civilian boat operators in typical (for Iranians and others) small boats with a dummy heavy machine-gun mounted on it, sent out to use typical Iranian swarming tactics while A-10s (and some other aircraft) make simulated attacks. These attacks were electronically recorded for later analysis.

The other tests had the A-10s firing training (non-explosive) ammo at remotely controlled boats. All this data can be used to prepare a training scenario for flight simulators and that scenario can also be used to develop new tactics and possible modifications to the A-10s autocannon.

The A-10 is a 23 ton, twin engine, single seat aircraft whose primary weapon is a multi-barrel GAU-8 30mm autocannon originally designed to fire armored piercing shells at Russian tanks. These days the 1,174 30mm rounds are mostly high explosive. The A-10 can carry up to 1,350 rounds. The 30mm cannon fires 363 gram (12.7 ounce) rounds at the rate of about 65 a second. The cannon usually fires in one or two second bursts.


Most A-10 pilots have at least some (and many a lot) of combat experience with the A-10 and have learned how to get the most out of the GAU-8 by using short, but accurate, bursts. Experienced pilots can get as many as 30 brief but accurate bursts. The GAU-8 originally had variable rate-of-fire that could be set as low as 35 rounds per second allowing up to 40 very short bursts. A few of these 30mm rounds hitting a small boat will put it out of action.

The Iranians were first seen conducting large-scale small boat swarm attacks in 2006. These training exercises tried several different swarming tactics. Many seemed to involve one or more separate squadrons each consisting of about a hundred small boats approaching U.S. warships.

The boats involved were 6- 21 meters (20-70 feet) long moving at speeds of 70-90 kilometers an hour. Some 10-20 percent of the Iranian boats would be equipped with anti-ship missiles like the six meter long, 680 kg (1,500 pound) Chinese C-802. Some smaller boats have been seen equipped with anti-tank missiles. The idea is that some of these boats would make it to the American ships, 50-100 kilometers away, and inflict some damage.

China was thought to be planning on the same tactics, but has apparently abandoned it as impractical for combat. Iran, however, now has several thousand of these small boats and continues to buy more. Ever since 2006 the U.S. navy has been practicing defending itself against such swarms. Combat simulations indicate the swarms would lose, but you never know.

The Iranian preference for "swarm tactics" has a lot to do with their inability to build or buy anything much better. Moreover, all those small boats keep thousands of Islamic conservative militiamen occupied and that makes for great propaganda videos.

The Iranians have since bought faster small boats and equipped their swarms with better missiles. Some of the boats are apparently equipped with explosives and operated by zealots willing to be a suicide boat bomber. So the swarms are still a threat.

In response the U.S. Navy added more autocannon (similar to the GAU-8 but usually 20mm or 25mm) to ships and adapted existing ones (like the 20mm Phalanx anti-missile system) to handle small boats. More 12.7mm heavy machine-guns were added as well. 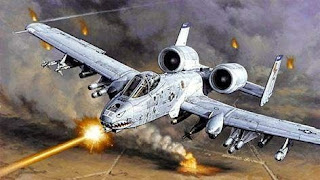 Having A-10 Warthogs on call, which is quite common in the Persian Gulf, gives the navy another weapon available to deal with any large scale use of swarming tactics in an effort to, for example, close the Hormuz Strait by sinking some large tankers at key points or simply to make a point.

In addition to the GAU-8 30mm autocannon the A-10 can carry seven tons of bombs and missiles. These days the A-10 goes out with smart bombs (GPS and laser guided) and Maverick missiles. It can also carry a targeting pod, enabling the pilot to use high magnification day/night cameras to scour the area for enemy activity. Cruising speed is 560 kilometers an hour and the A-10 can slow down to about 230 kilometers an hour.

In Afghanistan two drop tanks are usually carried, to give the aircraft more fuel and maximum time over the battlefield. The A-10 entered service in 1978 and 716 were built between 1972 and 1984. The A-10 didn’t see combat until the 1991 Gulf War and has been worked hard ever since.

When first designed the A-10 was expected to be available for attacking coastal shipping but rarely got a chance to do so. The latest such opportunity was in 2011 off Libya and that was successful. Very soon famous Warthogs will have real chance to blast the Iranian FACs and speed-boats and other small boats out of their own waters in the Persian Gulf.

How Iran & US Will Fight At Sea?

The U.S. Navy’s shipbuilders like to focus in on the China threat. But American ships’ most likely foes could be the Iranian Revolutionary Guard Corps Navy, or IRGCN, and its arsenal of 200 potential-suicide boats. So what would a fight between the U.S. and Iranian navies look like?

Iran’s suicide boats will likely employ a strategy of “swarming” — coming out of nowhere to ambush merchant convoys and American warships in narrow shipping lanes. Iran’s three Kilo-class submarines and four smaller, locally made midget submarines will help out, the latter by mining channels and choke-points.

And the most potent weapon the IRGCN may possess is its religious zeal and culture of martyrdom… preparing them spiritually for asymmetric combat.

The U.S. Navy is certainly not defenseless against kamikaze warfare… The U.S. has put more machine guns and 25-millimeter gyro-stabilized guns on the decks of warships, modified the 5-inch gun to make it more capable of dealing with high-speed boats, and improved the sensor suite of the Aegis computer-integrated combat system aboard destroyers and cruisers.

The IRGCN may employ not only simple swarming tactics but also attacks by fewer platforms that come armed with more sophisticated weapons, like anti-ship missiles and long-range torpedoes.

A-10 Pilots Train to Attack Swarms of Small Boats

It doesn’t necessarily take the resources of a major nation-state to challenge U.S. Navy warships. China for instance is building up a large navy and invests in long-range, ship-killing missiles. Iran can’t build a large navy but it does invest in swarms of small missile boats.

Like a swarm of insects, a swarm of boats can pose a threat as a larger, far more expensive warship might not be able to swat them all — and a single missile with enough punch can be devastating. So the U.S. military is practicing with ways to defeat such a potential threat with tank-killing A-10 Warthogs.

On Feb. 6, the low- and slow-flying Warthogs together with Canadian CF-18 Hornets carried out simulated attacks on dozens of boats in Florida’s Choctawatchee Bay. The planes didn’t drop any ordnance, however, as the boats were being piloted by local captains hired by the Air Force.

The 1980s-vintage Warthogs — built around a 30-millimeter rotary cannon and capable of carrying a variety of bombs and missiles — did fire inert rounds on unmanned boats at a different time during the exercise. The munitions expended during that other phase of the exercise also included delta-wing AGM-65 Maverick missiles and 500-pound laser-guided bombs.

“We evaluate precision guided munitions against realistic targets with realistic enemy defenses,” Lt. Col. Sean Neitzke of the 86th Fighter Weapons Squadron said. “There are plenty of places in the world where low-tech adversaries can mount 50-caliber machine guns and rocket launchers on small boats for use against us. They could also use other types of shoulder launched weapons, all of which could be a threat to American assets.” 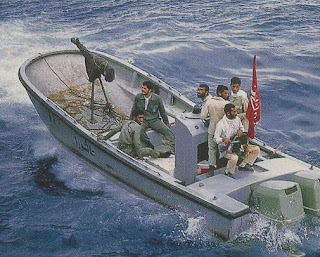 The Air Force had been trying to kill its A-10 attack planes for years — the branch prefers stealthy fighters and bombers — but pressure from Congress and continued relevance in the wars in Iraq and Afghanistan have kept the Warthogs flying. Perhaps stopping a boat swarm from overwhelming an American cruiser or destroyer might keep them going for a bit longer.

Interestingly, A-10s carrying out maritime attack missions is an old-school role for the plane, as the Warthog was originally envisioned in part as a sea attacker. But it has overwhelmingly fought on land with rare exceptions. For instance, A-10s attacked small boats during the 2011 Libyan intervention. Even Tom Clancy envisioned ship-killing Warthogs staging a show-of-force near a Soviet carrier in his 1984 novel The Hunt for Red October.

By the way, the Air Force is exploring other ways of deploying the ungainly attackers over the oceans — sending four of them in April 2016 on patrol over the South China Sea, which Beijing is colonizing and militarizing through the construction of artificial islands. China’s Maritime Militia also practices its own version of swarming.

Meanwhile, the U.S. Navy has been testing its 30-kilowatt Laser Weapon System which it deployed aboard the amphibious ship USS Ponce based in the Middle East. But the laser, while operational, is one-of-a-kind.

All the while, the Iranian navy has continued to harass U.S. Navy vessels with small speedboats using swarming-style tactics. In August 2016, Iran harassed U.S. ships four times in a single week. During a shooting war, these swarms could threaten the strategic Strait of Hormuz — where a hefty chunk of the world’s oil passes through.


Defeating swarms with A-10 Warthogs isn’t exactly revolutionary but that isn’t so much a problem. The plane isn’t a high-tech laser, but it doesn’t need to be. 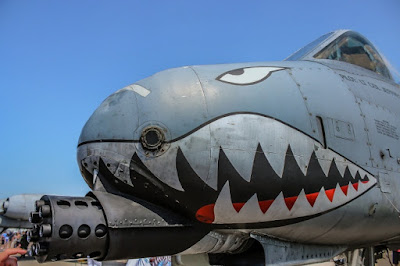 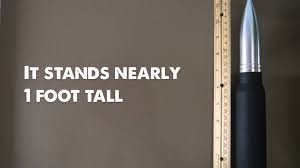 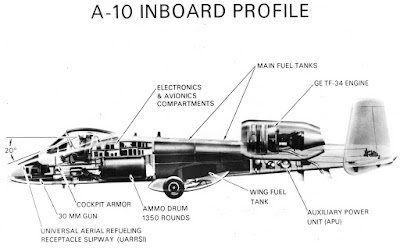 Related posts at following links:
You tube: Deadly Killer The Warthog's Autocannon
Posted by Hla Oo at 9:51 AM