(Compilation of various news articles from Canada in February-March 2017.)

Since a devout Muslim was appointed the Minister of Immigration & Citizenship in Canada hundreds of Burmese-Buddhist asylum seekers in Canada are on the verge of being deported back to semi-democratic Burma while thousands of Burmese-Muslims are being generously granted political asylum in Islamist-controlled Canada.

Somali-born Ahmed Hussen has recently declared his intention to rapidly deport Burmese-Buddhists (about 200) whose political asylum/refugee applications were summarily rejected by his now Muslim-controlled Immigration ministry just recently. At the same time he also announced to increase the quota of Bengali-Muslims (thousands of so-called Rohingyas) as a large part of Canada’s annual intake of refugees/ asylum seekers.

The whole act has been part of Trudeau’s accelerated program to rapidly Islamize Canada by repopulating Canada with mostly Muslim immigrants from third world nations such as Pakistan, Somalia, Sudan, and the Middle-eastern countries. And some Canadian Buddhists are fighting back.


They have chosen one particular Burmese-Buddhist named Thant Soe who is a long time  Canadian tax-paying resident for 14 long years (who is hand-picked to be deported back to Burma by Ahmed Hussen) as the example case for their fight against Canadian-Muslims’ racial-religious oppression against Burmese Buddhists.

They recently raised a petition to stop deportation of Thant Soe on CARE2 Petitions which stated that: “With regard to the case of Mr. Than Soe, a Myanmar asylum seeker living in Canada since 2003, I would like to raise five concerns with regard to his potential removal from Canada to Myanmar. These concerns argue strongly against his removal at this time in the absence of guarantees with regard to his security. I would like to start by acknowledging Canada’s humanity and generosity in allowing Than Soe to remain in Canada despite his ineligibility for asylum and the complexities of his case. I would also like to acknowledge Than Soe’s diligence in adhering to the conditions of his stay and remaining a productive, tax-paying resident……..”


The petition already has had 1.4 million likes on Face Book and 57 supporters in just one day since its launch on March-13. It is a gross injustice summarily deporting a Burmese-Buddhist who has been living and working and paying tax for 14 years at the same time importing thousands of Muslims with suspicious background from the same country just because they are stupid Muslims. Utterly Gross and Disgusting! 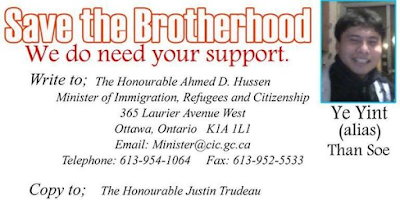