In ten days, on Friday, April 28, Pope Francis will land in an Egypt still shaken by the massacres of Palm Sunday, carried out by Muslims in two Christian churches packed with faithful.

But the mantra of the Vatican authorities, starting with the pope, continues to be that “Islam is a religion of peace.” Absolutely forbidden to speak of a “war of religion” or “Islamic terrorism.”

“La Civiltà Cattolica” had tried once, in a 2014 editorial signed by Fr. Luciano Larivera, to let itself be overtaken by the reality and to write concerning the most warlike wing of the Muslim world: “Its is a war of religion and of annihilation. It exploits power for the sake of religion, and not the other way around.”

But Fr. Antonio Spadaro stepped in immediately to disown this simple truth that had inadvertently appeared in the magazine he edits. But in the run-up to Francis’s journey to Cairo it has emerged once again, developed in depth, this time in “L'Osservatore Romano” and once again by a Jesuit.


His name is Henri Boulad. He is 86 years old and was born in Alexandria, Egypt to a Syrian family of the Melkite rite that escaped the anti-Christian massacres of 1860. He lives in Cairo, and the following is part of the interview that he gave to the newspaper of the Holy See dated April 13, Holy Thursday.

Q: Fr. Boulad, you were rector of the Jesuit college in Cairo where many Muslims and Christians have studied, a concrete example of coexistence. And yet today the world seems to be under attack by Islam itself.

A: But which Islam are we talking about? This is the point. In the Qur’an there are verses of Mecca and those of Medina. In those written in Mecca, Muhammad presents a very open discourse that speaks of love, the Jews and Christians are our friends, there is no constraint in religion and God is closer to us. The first part of Muhammad’s life therefore transmits a message of spirituality, reconciliation, and openness.

But when Muhammad leaves Mecca to found Medina, there is a change. From being a spiritual leader he becomes a head of state, military and political. Today three fourths of the Qur’an is verses of Medina, and they are an appeal for war, violence, and the struggle against Christians.

The Muslims of the 9th and 10th centuries were aware of this contradiction and got together to try to resolve it, the result being that they made the now famous decision of “abrogating” and “abrogated”: the verses of Medina abrogate those of Mecca. Not only that. Sufism was rejected and whole libraries were burned in Egypt and northern Africa.

So it would be necessary to reclaim the original verses that are the source, and these are precisely the verses of Mecca, but they have been abrogated and that makes the Muslim religion a religion of the sword (not a religion of peace). 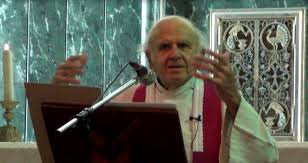 Q: But many observers and analysts speak of a moderate Islam.

A: Moderate Islam is a heresy, but we must distinguish between the people and the ideology, most Muslims are very open, kind, and moderate. But the ideology presented in the educational manuals is radical.

Every Friday the children hear the preaching in the mosques, which is a continual incitement: those who leave the Muslim religion must be punished with death, one must not greet a woman or an infidel, and fortunately this is not practiced, but the Muslim Brotherhood and the Salafis however want this doctrine, the moderate Muslims do not have a voice and the power is in the hands of those who presume to interpret orthodoxy and the truth.

Those who have the power today are not the Muslims who have taken from Islam that which is compatible with modernity and with life in common with other people, but the radical Muslims, those who apply a literal, and sometimes even exploitative, interpretation of the Qur’an and reject any sort of dialogue.

Q: But in this way they deny the work of all the great Muslim thinkers, like Avicenna or Al-Ghazali.

A: Yes, this is the sensitive point. The reform that there has been in the history of Islam has been rejected. For example, the Abbasid caliph Al-Ma'mun, who was born in Baghdad in 786 and died in Tarsus in 833, a follower of the Mu'tazilas, the rationalists of Islam, attempted a reform, but who still remembers him today?

What has prevailed has been the closed and rigorous Islam of Muhammad ibn Abd al-Wahhab. The most recent reform was that attempted by the sheikh Mahmoud Taha in Sudan, but he was executed in the town square of Khartoum because he had said that the verses of Mecca should abrogate those of Medina.

This is a problem within Islam, which does not offer responses to the questions of modern life and finds itself facing the need to reform itself. Islam would appear to need a Vatican II.

Q: Today what are the challenges that Egypt is facing?

A: One phenomenon that is spoken of little is atheism. In Egypt there are more than two million atheists. They have become so because they can no longer endure religion as an incitement to violence or to capital punishment. In this there is nothing of the divine. They want no more of fanaticism, of the liturgy as a mechanical repetition of actions and prayers. And to leave religion is something entirely new in Egypt and in the Arab world. 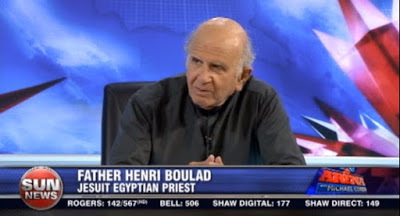 Attacks at two Coptic Orthodox churches in Egypt’s Nile Delta killed more than 40 people and injured more than 100 others during Palm Sunday services—including the one where Pope Tawadros II was worshiping.

ISIS claimed responsibility. In February, the Egypt chapter of the Islamist extremists had released a threatening video calling Coptic Christians “our priority and our preferred prey.” Soon after, about 100 Christian families fled their homes in the Sinai Peninsula amid a string of murders.

Nader Wanis, director of the Arkan Cultural Center in Alexandria, was worshiping at the Anglican Pro-Cathedral only two streets from St. Mark’s when the bomb went off. “It was only a few minutes before serving communion and it shook our whole church,” he told CT (Christianity Today). “We were scared, but insisted to continue.” 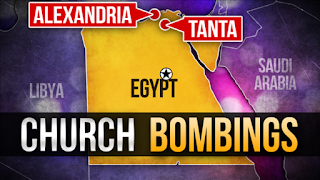 A member of Tanta’s Christian community described to CT a chaotic scene with many people in the streets. “I don’t know what to say. I’m still shocked,” said the Coptic woman, who requested anonymity. “But people are angry, and don’t understand how this happened amid all the security.” (Two weeks earlier in Tanta, a bomb was defused at Mar Girgis—the city’s largest church—and a local police training center was attacked.)

Tawadros was attending the service at the Alexandria cathedral, which serves as his historical seat in one of the five ancient sees of early Christianity. But the patriarch was unharmed by the suicide bomber, who blew himself up after being directed through a metal detector. Three police officers died in the intervention, according to state media. 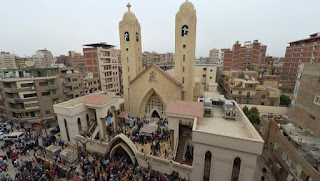 Andrea Zaki, president of the Protestant Churches of Egypt, also condemned the attack. “This black terrorism aims to create fear among Christians and stop them from going to church,” he told CT. “But we will work together in solidarity with the state, Muslims, Pope Tawadros, and all Christians to fight terrorism and bring Egypt to stability.”

A Tanta hospital operated by the Presbyterian Synod of the Nile opened its doors and received one-third of the medical cases, said Zaki. “During this week of Jesus’ suffering, we will pray to God to give us protection and healing, and comfort to the families of the martyrs.”

Pope Tawadros had previously sought to downplay the Sinai attacks, saying Coptic problems in Egypt were “minor.” The Egyptian government has highlighted recent successes in its fight against terrorism, including clearing a major mountainous region and killing the local ISIS leader.

But Grand Mufti Shawki Allam recently lamented a tally of more than 3,000 fatwas that incite the destruction of Egyptian churches. The government has been trying to combat such sentiments.

The church bombings are the deadliest since a December attack at a chapel of the flagship St. Mark’s cathedral in Cairo killed 29 mostly women and children on the Prophet Muhammad’s birthday. That attack on the spiritual center of the Coptic Orthodox church was the deadliest modern terrorism against Egyptian Christians until today’s attacks.

ISIS also claimed the Cairo attack, and vowed it was “just the beginning.” The previous deadliest attack on Christians also took place in Alexandria. In 2011, a New Year’s Eve attack at the Mediterranean coastal city’s Church of Two Saints killed 23 worshipers.

In the aftermath of today’s Tanta and Alexandria bombings, Wanis—profiled by CT’s This Is Our City project in 2012—prays that Copts won’t “explode.” “Like all Egyptians, Copts suffer economic problems and have difficulty to emigrate,” he told CT. “But now they are also being persecuted.”


But Wanis sought a clear and purposeful response. He immediately invited Muslim youth members of the Arkan Center to discuss what can be done together. “Copts are frustrated and angry, and they don’t know what to do,” he said. “All I can do is promote peace.” 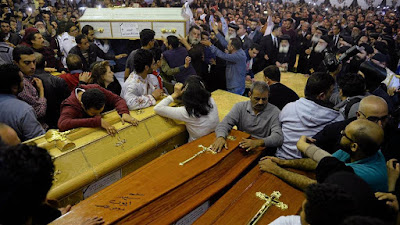 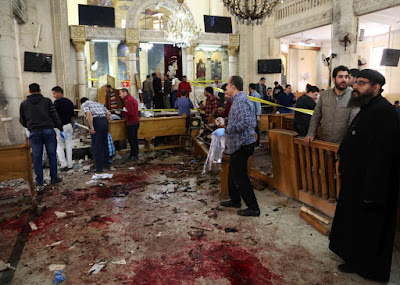 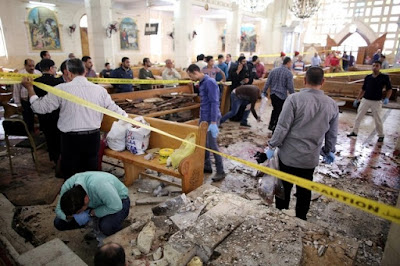 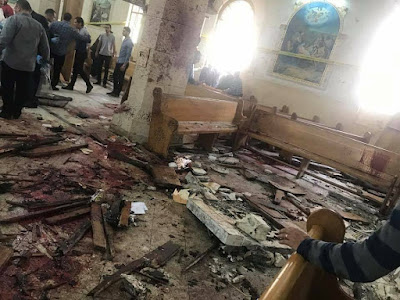