Mother Of All Bombs: Trump’s Easter Present To Islamists

(Kristina Wong’s article direct from The BREITBART NEWS on 13 April 2017.)

The U.S. military on Thursday dropped a massive 21,600-pound bomb in Afghanistan targeting Islamic State in Iraq and Syria fighters in a series of cave complexes. At 7:32 p.m., a U.S. MC-130 aircraft dropped the bomb – the U.S.’s largest non-nuclear bomb ever used in combat – in Achin district in the eastern province of Nangarhar, Afghanistan.

It was the first time the bomb, known as the GBU-43, or “Massive Ordnance Air Blast,” was used in combat. It has a yield of 11 tons of TNT, and is nicknamed the “Mother of All Bombs.” The bomb targeted ISIS’s Afghan affiliate, ISIS-Khorasan, “as part of ongoing efforts” to defeat the group in 2017, according to a statement from U.S. Forces – Afghanistan.

“The strike was designed to minimize the risk to Afghan and U.S. Forces conducting clearing operations in the area while maximizing the destruction of ISIS-K fighters and facilities,” the statement said.


The U.S. “took every precaution to avoid civilian casualties with this strike,” the statement also said but didn’t say the collateral civilian damage would be zero. The U.S. commander of forces in Afghanistan said the massive bomb was used since ISIS-K has thickened their defense.

“As ISIS-K’s losses have mounted, they are using [improvised explosive devices], bunkers and tunnels to thicken their defense,” said Army Gen. John W. Nicholson. “This is the right munition to reduce these obstacles and maintain the momentum of our offensive against ISIS-K.”

President Donald Trump did not say whether he authorized the bombing, but said he has authorized the military, implying that senior military leaders had the authority to use the bomb:

“Everybody knows exactly what happened. What I do is I authorize my military. We havethe greatest military in the world and they’ve done a job as usual. We have given them total authorization and that’s what they’re doing and frankly that’s why they’ve been so successful lately.

If you look at what’s happened over the last eight weeks and compare that really to what’s happened over the past eight years, you’ll see there’s a tremendous difference, tremendous difference. So we have incredible leaders in the military, and we have incredible military. We are very proud of them. This was another very, very successful mission.”

As for whether the dropping of the MOAB was meant to send a message to North Korea, Trump replied:

I don’t know if this sends a message, it doesn’t make any difference if it does or not. North Korea is a problem, the problem will be taken care of.

The MOAB is GPS-guided with precision guidance. It was designed to put pressure on then-Iraqi dictator Saddam Hussein’s military, according to an Air Force article. The MOAB’s final test was on March 11, 2003. It was first delivered into theater on April 1, 2003.

“The goal is to have the pressure be so great that Saddam Hussein cooperates,” then-Defense Secretary Donald Rumsfeld said in a March 2003 interview, according to the article. “Short of that – an unwillingness to cooperate – the goal is to have the capabilities of the coalition so clear and so obvious that there is an enormous disincentive for the Iraqi military to fight against the coalition.” 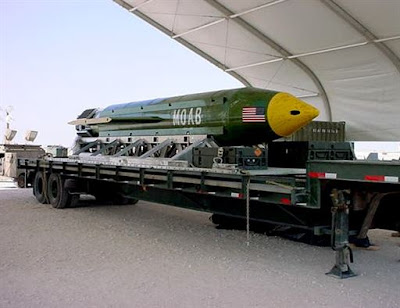 Five years later, it's still known as 'Mother of All Bombs'

EGLIN AIR FORCE BASE, Fla. -- What's worse than unleashing on society the wrath of the largest non-nuclear bomb yet to be made? Letting the world know it's out there and ready to be used at any moment.

The GBU-43/B Massive Ordnance Air Blast bomb is a 21,600 pound, GPS-guided munition with precision guidance and architecture to be delivered accurately to enemy forces with the main intention of permanently disabling them. The goal was to put pressure on then-Iraqi dictator Saddam Hussein to cease and desist or the United States would not only have the means but use them against the unpopular tyrant.

"The goal is to have the pressure be so great that Saddam Hussein cooperates," said then Defense Secretary Donald Rumsfeld in a March 2003 interview. "Short of that - an unwillingness to cooperate - the goal is to have the capabilities of the coalition so clear and so obvious that there is an enormous disincentive for the Iraqi military to fight against the coalition."

While the history books have well-documented the day of MOAB's final day of testing - March 11, 2003 at 1 p.m. a huge mushroom cloud could be seen from 20 miles away - much of the design and ramp up for producing it have been little talked about.

The MOAB, nicknamed the Mother of All Bombs, was rapidly produced in-house at the Air Force Research Laboratory Munitions Directorate here. It started out simply as an idea and quickly made its way to the lab for prototype production. The request came during Thanksgiving 2002 and was originally designed as a replacement for the BLU-82 Daisy Cutter. One unique characteristic would later define the MOAB from the Daisy Cutter: it was satellite guided or a "smart bomb." 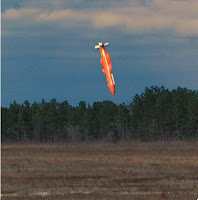 "We were asked to generate a prototype and we were asked to work out the bugs so that it might evolve into something that could be produced (for the warfighter)," said Robert Hammack, AFRL Munitions Directorate Munitions Fabrication Facility (or Model Factory) team chief.

When the model shop was first tasked with the bringing the idea to reality, the lead model maker, Joseph Fellenz, made many of the parts himself and helped solve the fabrication issue associated with bringing the prototype to a full-scale operational munition. Also on the project was Al Weimorts, the late creator of the BLU-82.  "Every technical glitch or roadblock we encountered was worked out by Al," Mr. Hammack said. "Our team was filled with engineers and other people with deeply important skill sets necessary to pull this off."

The reason this project remains so significant to the model shop workers is it was the first project they were not only asked to focus on solely proving theories but implementing them into reality. "The shop was filled with such excitement and the morale immediately went up," Mr. Hammack said. "The enthusiasm went through the roof and we went on two 10-hour shifts a day until the project was completed."

The model shop crew was given carte blanch to get the prototype built and that included selecting the people they needed to get the project rolling. "When this project came to us, everyone immediately came on board," Mr. Hammack said. "Many people willingly came out of retirement for the chance to work on MOAB because it was a chance to work on something different -- a cradle-to-grave project."

Unlike any project before or since, the model shop was solely responsible for coordinating the logistics on material acquirement and engineering the new munition. It was designed, built, tested and refined all in one location.

After each weapon was assembled, it was individually loaded onto a rented flatbed truck, secured and covered by tarps. The munition was then transported to the Naval Ammunition Depot at McAllister, Okla., where it was filled with explosive materials and painted and catalogued for the inventory. 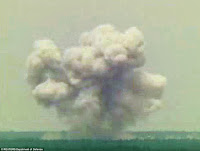 "A little known fact is why the MOAB is green," said Mr. Hammack. "Since we were in such a rush to get the weapon into our inventory to send over to aid the war effort, resources were limited. The weekend the MOAB arrived, the only color available in the amount we needed was John Deere green."

The 16-hour expedition was a sensitive undertaking -- one which saw the drivers making the trip in one long haul stopping only for gas. "Once I was stopped by a Texas State Trooper who was curious about our cargo and wanted a peek," he said. "Apparently he had stopped one of our drivers the week before and had some idea of what we were carrying."

Once the television networks broadcast the detonation, the American public became very supportive of the drivers' long hauls. "We started getting thumbs up by passersby on the highway," Mr. Hammack remembered. Five years later, the event is remembered more with a sense of awe and sense of unequaled accomplishment.

"At the time we didn't think too much of what we were doing other than our job and aiding in the war effort," he said. "After we delivered the weapons, it soon became clear the magnitude of our efforts -- what we had actually helped create."

Patriots come in all shapes and sizes. Their contributions, however understated at the time, can send ripples felt throughout the world -- even if the contribution is the largest non-nuclear weapon in the Air Force inventory yet to be used.


"The most amazing thing about MOAB is it's the most powerful bomb ever built and has done its job -- deterring the enemy -- simply because they know about it," Mr. Hammack said. The first MOAB was delivered into the operational theater for the Global War on Terror April 1, 2003. To date, none have been used in combat.

92 Dead IS Terrorists Were Pulled Out Of MOAB Crater

Afghan officials say the death toll is likely to increase as U.S. and Afghan Security Forces continue their damage assessment and clear the formerly held ISIS territory. The U.S. dropped the “mother of all bombs” on ISIS’s headquarters in Afghanistan after repeated efforts to expel the militants failed. No civilian casualties have been reported yet by the U.S. or Afghan military.

“This was the first time that we encountered an extensive obstacle to our progress,” top U.S. general in Afghanistan Gen. John Nicholson told reporters Friday. He continued, “It was the right time to use it tactically against the right target on the battlefield.”

The bomb used by the U.S. is designed to explode 6 feet before it hits the ground and collapses any underlying tunnels or caves. So far Afghan officials say “Twenty-two bodies were found in one cave, 60 in another and 10 bodies in a third.”

“The earth felt like a boat in a storm,” one villager who lived near the blast told The Guardian. He continued, “My ears were deaf for a while. My windows and doors are broken. There are cracks in the walls.” Achin’s Mayor Naweed Shinwari said, “my relatives thought the end of the world had come.”


“Last night’s bomb was really huge, when it dropped, everywhere, it was shaking,” one resident told Reuters. He characterized the strike as a “positive move” to rid the village of ISIS fighters. One man who lived two miles from the blast area told CNN “we were all scared and my children and my wife were crying. We thought it had happened right in front of our house.” 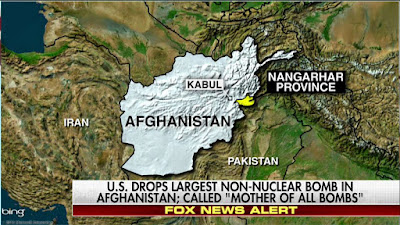 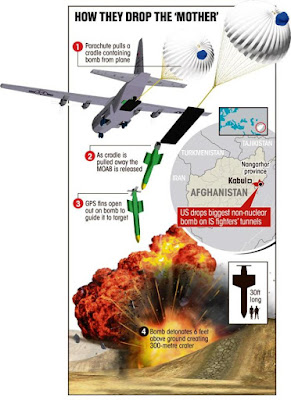