(Ian Mason’s article direct from The BREITBART NEWS on 31 March 2017.) 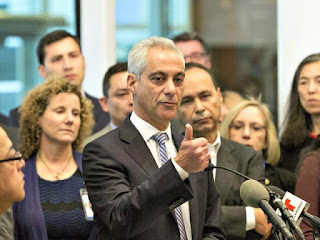 Rahm Emanuel Invents New ID to Ensure Illegals Get Their Welfare: Chicago Mayor Rahm Emanuel has moved forward with plans for a Chicago-only identification card specifically designed to ensure illegal aliens in the city can receive welfare benefits with minimal risk of repatriation.

The new program was unveiled at a Chicago City Council meeting on Wednesday, and it protects illegal aliens from federal oversight by not collecting any copies of identification documents presented when illegals apply for the identification card.

Emanuel, once President Barack Obama’s Chief of Staff, has been one of the loudest voices decrying Attorney General Jeff Sessions’s efforts to cut off federal funding for sanctuary cities like Chicago that refuse to cooperate in the enforcement of immigration laws.


The “Municipal ID” plan is Emanuel’s latest bid to resist the effort of the Justice Department and remain what he has called a “welcoming city.” Emanuel’s new City Clerk Anna Valencia’s website describes the Municipal ID as “an optional, valid, government-issued ID that they can then use to access a range of services from both the private and public sectors. ”

In addition to ensuring access for illegals to government programs, the Clerk’s Office also claims to be “working with cultural institutions, sports teams, pharmacies, local chambers of commerce and community organizations to explore potential discounts and partnerships.”

The scheme is specifically designed not only to allow illegals to obtain the cards, but to avoid collecting data that could be used by U.S. Immigration and Customs Enforcement to discover aliens in the country illegally. Chicago is apparently looking to a model pioneered in San Francisco to frustrate ICE efforts.

While city officials will make no effort to ascertain if recipients of the new ID are committing a crime by being in the United States, they will ensure that the gender with which they most strongly identify will be properly documented. “Applicants will also be able to self-designate their gender, which will be huge to the transgender and LGBTQ community. And it’s not just for undocumented individuals,” the same source said.

The Sun-Times also reported that the Municipal ID program itself will cost Chicago taxpayers $1 million in its first year of implementation. 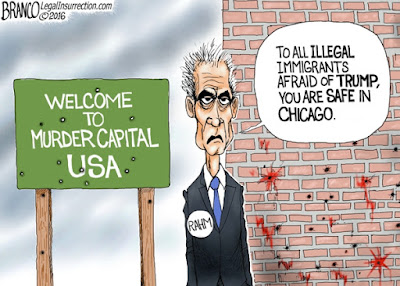 1. What is a Chicago Municipal ID card?

The Chicago Municipal ID card was established to bring Chicago together as one community. It will enable Chicagoans to obtain an optional, valid, government-issued ID that they can then use to access a range of services from both the private and public sectors. The City of Chicago is currently exploring a range of benefits, from discounts at cultural institutions to connecting with pharmacies as part of the program. 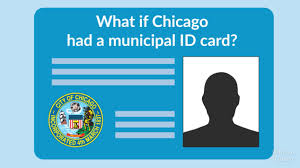 All Chicagoans who display documents to establish proof of identity and residency in Chicago will have access to getting a Municipal ID card.

All City of Chicago departments will accept the Chicago Municipal ID card as proof of identification. We are still working with other partners to determine who else will accept the card and to ensure that residents who obtain the card receive a wide array of benefits.

No one is required to obtain a Chicago Municipal ID card – it is an optional service offered to Chicago residents. The City's goal is to offer enough benefits and incentives through the program that all Chicago residents would want to obtain one. In addition to being an ID card that will be accepted by City departments, we are also exploring the exciting opportunities to have the card offer discounts and other benefits.

5. Where can I get Municipal ID card?

We are working with community groups and neighborhood organizations to determine where we will administer the cards. Our goal is to make them accessible to all communities across Chicago. The City of Chicago is committed to issuing its first Chicago Municipal ID cards by the end of 2017.

6. What type of benefits will be associated with the Municipal ID card?

We are currently working with cultural institutions, sports teams, pharmacies, local chambers of commerce and community organizations to explore potential discounts and partnerships. Let us know if you have an idea or if your organization is interested in partnering by sending us an email at cityclerk@cityofchicago.org (link sends e-mail) or sharing your ideas on social media using the hashtag #YourCityYourClerk.

7. How can I be sure that my information will be safe?

Protecting people's security is our number one priority. Drawing upon the best practices of other cities that have implemented municipal ID programs, Chicago will establish a program that captures minimal information from applicants. The Chicago Municipal ID will be a secure card and Chicago will take every precaution it can to protect each applicant's data to the maximum extent permitted by law.

8. Can I vote with the Municipal ID Card?

Yes you legally can in all Local, County, State, and Federal Elections.

9. How can I learn more about the Municipal ID Card? 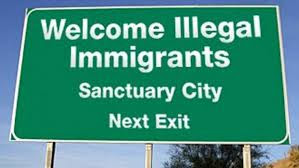 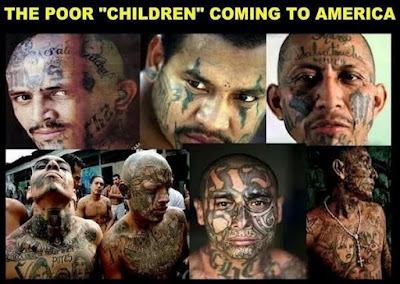