(News article direct from The IRRAWADDY and other sources on  28 March 2017.)

NAYPYIDAW — Burma Army Chief Snr-Gen Min Aung Hlaing has warned against what he described as a political intervention in Burma in the name of assisting the Rohingya.

The Burma Army chief, in his address on the 72nd Anniversary Armed Forces Day observed in the administrative capital Naypyidaw on Monday, reiterated that “Muslim Bengalis” did not belong to Burma, but were interlopers from Bangladesh—a reference to the self-identifying Rohingya community largely concentrated in Arakan State. The senior general said any international political intervention on the pretext of assisting refugees from this community would threaten Burma’s sovereignty.

According to the United Nations High Commissioner for Refugees, more than 70,000 Rohingya have fled to Bangladesh following a crackdown by security forces in northern Arakan State, following coordinated attacks on border police outposts last October.


“We are responsible to prevent, based on the Tatmadaw Spirit, those actions done on the pretext of [addressing the] political situation as well as religious or racial issues in our country, because they can harm the sovereignty of our country,” said the army chief.

On Friday, the 34th Session of the UN Human Rights Council in Geneva adopted a resolution on Burma tabled by the EU, and resolved to dispatch an independent international fact finding mission to Burma. They also extended the mandate of the UN’s Special Rapporteur on Burma, Yanghee Lee.

Regarding military operations in northern Arakan State, northern Kachin State, Mong Ko in Shan State and Laukkai, in the Kokang region, Snr-Gen Min Aung Hlaing said on Monday that the military had to defend the country and its political future. 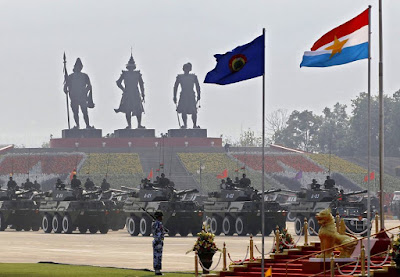 “The armed forces have a duty to defend the sovereignty of our nation. Our Armed Forces, keeping always in our minds the prosperity of the nation and her people, will destroy every violent insurgencies. Any enemy incursion violating our nation’s land, water, and air space will be utterly destroyed.

The 2016 insurgent activities in the Northern Rakhine State, the Kachin State in Northern Myanmar, and the Mongkoe and Laukkai regions in Eastern Shan State had clearly violated our nation’s sovereignty and thus the armed forces had to retaliate with extreme prejudice to defend our territory.

The minor refuge crisis, caused by the Bengali-Muslim terrorist attacks in October 2016 and the resultant Tatmadaw clearing operations, is being used by anti-Myanmar international organizations now calling for so-called fact-finding mission and eventual  peace-keeping forces as political intervention in our domestic affairs.

In our nation we have no ethnic Rohingya race and we already strongly let the world know that fact.  The Bengali-Muslims in Rakhine State are not one of Myanmar ethnic races but illegal immigrants from Bangladesh.  Exploiting the illegal Bengali-Muslims as so-called victims of human rights violations will be seen by the armed forces as the clear interferences in our domestic affairs.

Tatmadaw knows that we have a responsibility to carry out our duties as per the laws of land, but any future political or military intervention by foreign nations or international organizations exploiting our domestic political, racial, and religious difficulties clearly violate our sovereignty and accordingly our Tatmadaw will defend our nation to the last man.”

PETALING JAYA: An armed group fighting for Rohingya rights in Myanmar has denied links with any terrorist groups in the world, saying that its attacks are only against the "oppressive" Burmese Army.

The Arakan Rohingya Salvation Army (Arsa), as the group is known, said it did not commit acts of terrorism against civilians regardless of race and religion as it did not subscribe to "the notion of committing terrorism" for a cause it believed to be legitimate. Arsa, which was initially known as the Faith Movement or Harakah al-Yaqeen, said it has come forward to defend, salvage and protect the Rohingya to the best of its capabilities.

"We, in doing so, declare loud and clear that our defensive attacks have only been aimed at the oppressive Burmese regime in accordance with international norms and principles until our demands are met," the group said in a statement on Wednesday that was disseminated through several Rohingya-centric news outlets.

It is believed to be the first time it has issued a statement. The four-page statement was signed by the group's "commander-in-chief." Arsa made 20 demands of the Burmese Government, including reinstating the native ethnic status of the Rohingya and issuing them with citizenship identity cards.

The group has been blamed for coordinated attacks on three border posts in Rakhine state on Oct 9 last year, in which nine police officers were killed. This prompted a violent backlash that caused thousands of Rohingya to be displaced including to Bangladesh.

Arsa was also said to be responsible for attacks last November that claimed the lives of two police officers. Rohingya journalist-activist S.M. Anwar, who is based in Malaysia, said the group was currently hiding deep in the forests bordering Myanmar and Bangladesh. "They are frustrated young guys who are rebelling against the Government," he told The Star Online.

The International Crisis Group (ICG) said in a report in December that the movement is led by a committee of Rohingya émigrés in Saudi Arabia and is commanded on the ground by Rohingya with international training and experience in modern guerilla warfare. ICG also said the movement had considerable backing from Muslims in northern Rakhine state, including several hundred locally trained recruits.

Considered to be stateless and often subjected to arbitrary violence and forced labour in Myanmar, the Rohingya are considered by the United Nations as one of the most persecuted minorities in the world. As of February this year, there were 56,458 Rohingya refugees registered with the UNHCR in Malaysia, although unofficial estimates put the number at three times that.

GENEVA: The UN rights body (Muslim-controlled UNHRC) on Friday adopted without a vote a resolution on addressing the human rights situation of Rohingya Muslims and other minorities in Myanmar, nearly a month after a regional crisis erupted with hundreds of migrants from the nation found adrift in the Bay of Bengal.

The resolution, which was to be considered yesterday but could not proceed due to the absence of the delegation of the country concerned - Myanmar - in a rare occurrence, was subsequently adopted in the UNHRC without a vote. India yesterday disassociated itself from the resolution, saying it is "highly prescriptive and not consistent with the broad ethos" of the work of the Council.

"We have serious concerns on the draft resolution which focuses on issues that are sectarian in nature... With respect to Rakhine State, we have noted that the Government of Myanmar has taken steps towards restoration of law and order and has expressed readiness to cooperate with UN and other humanitarian agencies regarding rehabilitation of those affected by violence," said the Permanent Representative of India to the United Nations Office at Geneva, Ajit Kumar.

"The draft resolution under consideration is highly prescriptive and not consistent with the broad ethos of the work of this Council. My delegation will also disassociate from the draft resolution and its contents," Kumar said in a statement. Myanmar today rubbished the "notion" that the human rights of Muslims in the country were violated.

Permanent Representative of Myanmar to the United Nations Office at Geneva, Maung Wai, said: "The draft resolution has nothing to do with the promotion and protection of human rights. Rather its real purpose is to raise the profile of a particular faith. Its adoption will do nothing good it will only prove counterproductive.

Yesterday in a statement to the UNHRC, the EU recognised the diversity of minorities existing in Myanmar and "the need to recognise that the situation is more complex than a question of religious identity".


In recent years, tens of thousands of persecuted Rohingya Muslims besides Bangladeshi economic migrants have fled on boats across the Bay of Bengal in search of better prospects.