(Michael Doyles’s article direct from The MCCLATCHY DC on 03 April 2017.) 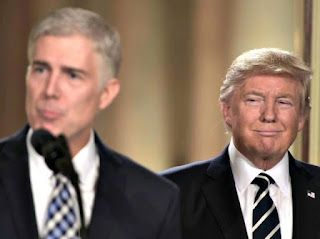 The Senate Judiciary Committee on Monday approved the nomination of Judge Neil Gorsuch to the Supreme Court, setting up a filibuster showdown with Democrats that’s likely to end with a rules change so explosive it’s been dubbed the “nuclear option.”

On a party line 11-9 vote, the Republican-controlled Judiciary panel acted to move Gorsuch’s nomination to the Senate floor. There, Democrats have pledged a filibuster that Republicans, in turn, have promised to end by eliminating the rule that requires 60 votes to end debate on a Supreme Court nomination.

“Here’s where we’re headed,” said Sen. Lindsey Graham, R-S.C. “We’re headed toward a world where you don’t need one person from the other side to pick a judge.”


(WIKIPEDIA: A filibuster in the United States Senate is an obstructive, seemingly-childish tactic used in the United States Senate to prevent a measure from being brought to a vote. The most common form of filibuster occurs when a senator attempts to delay or block a vote on a bill by extending debate on the measure as the Senate rules permit a senator, or a series of senators, to speak for as long as they wish, and on any topic they choose.)


While the rule change would leave in place the power of senators to filibuster on other matters, some lawmakers worry that in the current toxic political climate it might be only a matter of time before someone will seek to change that, as well. “I think it’s obvious that the Senate is not a healthy institution,” said Sen. Ben Sasse, R-Neb.

The vote on Gorsuch’s confirmation to the seat left vacant by the February 2016 death of Justice Antonin Scalia is likely to come Friday. A 49-year-old Colorado native, educated at Columbia, Harvard Law School and Oxford, Gorsuch was previously confirmed by voice vote in 2006 to serve on the Denver-based 10th U.S. Circuit Court of Appeals.

Since then, he has participated in some 2,700 federal cases arising from the states of Oklahoma, Kansas, New Mexico, Colorado, Wyoming and Utah. He casts himself as a conservative in the mold of Scalia, heeding the black-and-white text of a statute or the Constitution.

“Justice Scalia was a mentor,” Gorsuch said. “He reminded us that words matter, that the judge’s job is to follow the words that are in the law, not replace them with words that aren’t.”

The Senate Judiciary Committee voted to approve him following more than four hours of discussion that largely rehashed familiar arguments. Republicans stressed Gorsuch’s qualifications, his high rating from the American Bar Association and the regard due the president’s selection.

“He’s earned the universal respect of his colleagues on the bench,” said Republican Sen. Charles Grassley of Iowa, the Judiciary Committee’s chairman, adding that “he’s a judge’s judge.”

“I haven’t forgotten the injustice done to Judge Garland, and neither have any of my colleagues,” said Sen. Chris Coons, D-Del., adding that “the principles that have defined the Senate are crumbling.” Sen. Dianne Feinstein of California, the senior Democrat on the Judiciary panel, likewise cited Republicans’ treatment of Garland in saying, “This is not a routine nomination.”

All 52 Republicans have pledged to vote for confirmation, as have three Democrats. But with 41 other Democrats already committed to voting no on Gorsuch’s confirmation, the Republicans inevitably will fall short of the 60 votes needed to end debate.

When that happens, Senate Majority Leader Mitch McConnell, R-Ky., has already made clear he will take the steps necessary to secure Gorsuch’s confirmation. “There’s no principled reason to block an up-or-down vote,” McConnell said on the Senate floor Monday.


That means invoking the so-called “nuclear option,” a reference to the party that controls the Senate changing Senate rules by a simple majority vote. In this case, GOP senators would change the rules to block filibusters of Supreme Court nominations. With the rule changed, senators could then move on to the up-or-down vote that Gorsuch is all but certain to win. 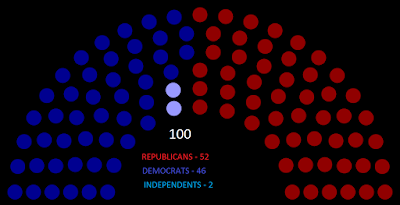