SYDNEY—Scott Morrison has been re-elected May 18 as Australia’s Prime Minister, securing another three-year team for the Liberal-National coalition following an intense five-week campaign in Australia’s federal election. In a victory speech, Morrison said that it was a victory for all the “quiet Australians,” and promised that the government will put Australians first.

The centre-right coalition is edging closer to the 76 seats it needs to have a majority in the parliament. The coalition sits at 74 seats, with the centre-left Labor party on 66, as the counting ended in the late hours of Saturday, May 18.

The results upended pre-election polls which predicted a Labor victory, though it is unclear whether the coalition can govern with an outright majority or will need to negotiate support from independents. The final result may not be known for some time.


“I have always believed in miracles,” a jubilant Morrison told Liberal Party supporters in Sydney just after midnight. “How good is Australia. And how good are Australians?” he said, to roaring applause. “This is the best country in the world in which to live and it’s those Australian that we have been working for, for the five and a half years since we came to government under Tony Abbott’s leadership back in 2013,” Morrison said.

“It has been those Australians who worked hard every day. They have their dreams, they have their aspirations,” he said. “To get a job, to get an apprenticeship, to start a business, to meet someone amazing, to start a family, to buy a home, to work hard and provide the best you can for your kids.

“To save for your retirement, and to ensure that when you’re in your retirement, that you can enjoy it because you’ve worked hard for it. These are the quiet Australians who have won a great victory tonight,” Morrison said, to cheering and applause.

“Because it’s always been about them,” he said. “Tonight is not about me or it’s not about even the Liberal Party. Tonight is about every single Australian who depends on their government to put them first. And that’s exactly what we’re going to do.”

Morrison, who became prime minister less than nine months ago, promised to return to work straight away. “We’ve got a lot of work to do. We’re going to get back to work for the Australians that we know go to work every day, who face those struggles and trials every day,” he said. “They’re looking for a fair go and they’re having a go and they’re going to get a go from our government,” he said. 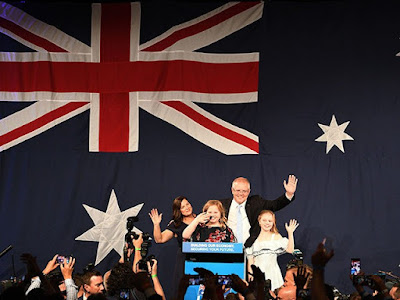 ScoMo Turned Labor's Strategy Into Perfect Weapon Against them

Scott Morrison (affectionately known as ScoMo) has earnt a permanent place as a Liberal Party legend — returning the Government in what was meant to be an unwinnable election for the Coalition. Mr Morrison smashed the doctrine that disunity will lead to electoral death.

Despite three prime ministers in two terms of government, the Queensland swing to back the Coalition and swings in Tasmania and WA showed that ultimately jobs and fear of change are too dominant.

The Prime Minister made the campaign all about economic management and himself — out-campaigning Labor by running a brutal and stunning campaign demolishing Labor's big-target policy agenda.

Mr Morrison made the campaign a referendum on him and Bill Shorten, and downplayed the Liberal brand — cultivating a new Scott Morrison image and promising to be a steady pair of hands on the economy. He told a packed crowd of Liberal supporters in Sydney he had always believed in miracles. "And tonight we've been delivered another one," he said.

Labor took a big risk campaigning on big changes to tax loop holes including franking credits and negative gearing, allowing Mr Morrison to spend every day of the campaign casting doubt on the way Labor would remake the country.

The marketing metamorphosis of Mr Morrison, from the tough-on-borders hard head to the daggy suburban dad next door, was an important and strategic pivot for a party with a diminished frontbench and deep ideological schisms in its ranks.

His message was sharp, piercing and he never deviated from the one central claim — that Labor was a high-taxing risk to the economy and Mr Shorten would take money "from your pocket". By contrast, Labor drifted from message to message — it started on health, moved to wages and staggered into climate change.

Labor took considerable policy risks in this campaign, making itself the big target with a suite of policies which had identifiable and quantifiable losers. It was crazy brave, breaking the orthodoxy that oppositions should slide into government without taking big policy risks.

Compare it to the last change of government, to Labor in 2007 when Kevin Rudd campaigned on an agenda of being a younger John Howard and matching the Coalition's tax cuts. Labor took a gamble by taking this approach, but in the end the public made the judgement that the risk was too big. Australians have reinforced the 1993 precedent — some say curse — that has encouraged oppositions to play it safe and steer away from bold big ideas.