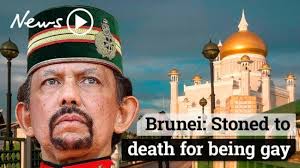 Brunei's LGBT community flees 'inhumane' new stoning laws: When the tiny, oil-rich kingdom of Brunei first announced in 2013 that it would adopt strict Islamic laws, including death by stoning for gay sex, many in the country's LGBT community considered fleeing.

But some stayed on, hoping that the law, which is set to be formally enacted on April 3, would never come to pass. "It's really scary," says Khairul, a young gay man in Brunei who spoke to CNN over the phone. He and others interviewed by CNN for this story asked that their real identities to be hidden over concerns for their safety and that of their families.

"I thought I would not be accepted. (I thought) I would be outcast by my family, (I thought) I would be sent to religious counseling, to help me change," Khairul says. "But, it was worse than I thought, because of the stoning. It made me feel that if that comes to reality, I might as well just leave," he adds. "(The laws are) inhumane. It's a very aggressive punishment. It's not something that a human should suffer ... just because of being a homosexual."


Transgender woman Zain fled Brunei in late 2018 and is now seeking asylum in Canada. "I wanted to live my life on my own terms, in the sense that I wanted to be a woman. I wanted to live a life without religious fundamentalism, conservatism, so I just left the country," Zain says. "Under Sharia law I would be fined and caned and jailed."

Zain says her understanding of Sharia law increased her concerns about what was to come. "I'd been living in fear probably since 2013," Zain says. "I was indoctrinated with religious school, so I knew these laws a bit more than my friends who aren't as religious, and I was a bit scared about Sharia law being implemented."

Zain says it's not just the LGBT community that will be threatened by these laws. "Everyone is affected. It's just going to be a horrible life living there, even if you're not LGBT," Zain says. "Women especially would be at a big disadvantage there." The new law also punishes adultery among heterosexual couples with death by stoning.

Zain is encouraging others to leave the country. "I just want my LGBT friends to be safe, and if possible get out of Brunei," Zain says. "It's not a good place to have your freedom be taken away from you, your human rights. It's a terrible way to live."

Brunei, a sultanate of about 450,000 on the island of Borneo, is close to the more moderate Islamic nations of Indonesia and Malaysia. In comparison to its neighbors, Brunei has grown conservative in recent years, including banning the sale of alcohol.

The new penal code was implemented by the playboy Sultan of Brunei, Hassanal Bolkiah, who also acts as the country's prime minister. In announcing the change, the government's website quoted the Sultan as saying that his government "does not expect other people to accept and agree with it, but that it would suffice if they just respect the nation in the same way that it also respects them."

Shahiran S. Shahrani, fled Brunei in October as he awaited a verdict in his trial for sedition, which he was charged with after making a critical post about the government on Facebook. Shahrani now lives in Vancouver, British Columbia. It was only when he got to Canada that he was able to come out as gay. "I never came out to my family, I never told them. I always hid it, I was always living in fear that people would know."

Shahrani is watching from afar as what he calls "horrendous" laws are coming into force. "I never expected this to go this far. I knew that Brunei always wanted to have Sharia law enacted in the country; I've been expecting it since I was a kid," Shahrani says. "But I just can't imagine living under Sharia law. Being gay in Brunei was difficult enough without Sharia law."

"It's hard to think that just being who you are could get you stoned to death," Shahrani says.

Governments and activists around the world are now urging Brunei to reverse its decision. "I appeal to the Government to stop the entry into force of this draconian new penal code, which would mark a serious setback for human rights protections for the people of Brunei if implemented," UN High Commissioner for Human Rights Michelle Bachelet said in a statement on Monday.

An Asian LGBT rights coalition, ASEAN SOGIE Caucus, also called for a "halt" to the law, adding that it had "already sent a chilling effect to LGBTIQ persons as it made them vulnerable to harassment, intimidation and surveillance by law enforcers."

Last week, actor George Clooney called for a boycott of nine luxury hotels around the world controlled by the government-owned Brunei Investment Agency. "In the onslaught of news where we see the world backsliding into authoritarianism this stands alone," Clooney said in the opinion piece for Deadline.

Singer Elton John also added his support behind the campaign, issuing a statement saying that "discrimination on the basis of sexuality is plain wrong and has no place in any society." Despite the international pressure, the Brunei prime minister's office released a statement on Saturday in defense of its new laws.

"Brunei Darussalam is a sovereign Islamic and fully independent country and, like all other independent countries, enforces its own rule of law," the statement said. Matthew Woolfe, the founder of The Brunei Project, a human rights organization, says that the reasons for the laws being implemented are not clear, but the economy could be one of them.

"In Brunei, the economy is starting to decline, and has been declining for some time now, so it could possibly be a way of further strengthening the government's grip on power," he says. And although this move seems likely to damage the faltering economy further, Woolfe says that it might be part of a strategy to shift away from Western countries toward the Islamic world.

In Canada, exiles Shahrani and Zain are quickly settling in to their new life and their now open sexuality. Zain says that she was "always angry" in Brunei, because "I was always surrounded by religious conservatives." But things are different now.

"It's very refreshing actually, I've been much happier, living this three to four months here, than I have ever been in my entire life back there," Zain says. "I was just scared being my true self there, fear is not a problem here."

Shahrani also says that Vancouver has been an eye opener for someone used to hiding his sexuality. "Vancouver is very, very different from other Western cities that I've been to," Shahrani says. "Gay men just hold hands in the supermarket, they kiss, it's OK. That's why they don't need gay bars; all the bars are gay. It's great."

Shahrani is now hoping to inspire other Bruneians who are thinking about leaving. "If you feel like you're in danger, I made it out, you can too," he says. "I don't think Brunei can change anytime soon, and I don't want them to wait for that to happen, I don't want my country to be responsible for the death of my friends."

The University of Oxford says it will “reconsider” an honorary degree it awarded the Sultan of Brunei following the outcry over new Islamic laws in the South-east Asian nation that punish gay sex and adultery by stoning offenders to death.

“The decision to confer this degree 26 years ago was recommended by a Committee and approved by Council and by Congregation at the time,” they wheedled — but insisted that “At no point has the University declined to reconsider [the degree].”

Dozens of protesters raised the rainbow flag of the LGBT rights movement on Saturday outside London’s Dorchester Hotel, which Brunei’s sultan owns. Celebrities including George Clooney, Elton John and Ellen DeGeneres have supported a global boycott of nine hotels tied to Hassanal.