War With Iran: US Military Build-Up In Middle East

(Jon Dougherty’s article from The NATIONAL SENTINEL on 11 May 2019.)

Target Iran: U.S. building massive deterrent force in Middle East with carrier, missiles, bombers. Apparently, the intelligence the Trump administration either gathered on its own or received via Israel regarding Iran’s intent to strike American interests in the Middle East in response to new sanctions was pretty solid.

That would explain the shifting of a tremendous amount of military assets and firepower to the region that is currently underway. As Reuters reports, the Trump administration is warning American merchant ships of Iran’s possible intentions as well, even as a top cleric in Tehran threatened the U.S. fleet.

Iran could target U.S. commercial ships including oil tankers, the U.S. Maritime Administration said on Friday, as a senior Iranian cleric said a U.S. Navy fleet could be “destroyed with one missile.” In the latest tense exchange between Tehran and Washington, Iran’s hardline Revolutionary Guards separately said Iran would not negotiate with the United States, a stance that seemed partly aimed at discouraging Iranian President Hassan Rouhani and his moderate allies from taking up a U.S. offer of talks.


U.S. President Donald Trump on Thursday urged Iran’s leaders talk with him about giving up their nuclear program and said he could not rule out a military confrontation. Trump made the offer as he increased economic and military pressure on Iran, moving to cut off all Iranian oil exports this month while beefing up the U.S. Navy and Air Force presence in the Gulf.

Acting U.S. Defense Secretary Patrick Shanahan approved a new deployment of Patriot missiles to the Middle East, a U.S. official told Reuters on Friday. The U.S. aircraft carrier Abraham Lincoln, deployed as a warning to Iran, passed through Egypt’s Suez Canal on Thursday and American B-52 bombers have also arrived at a U.S. base in Qatar, U.S. Central Command said.

Meanwhile, Agence France Presse reported that the movement of U.S. military assets includes an assault ship and ballistic missiles to the region. The Pentagon announced Friday that it is deploying an amphibious assault ship and a Patriot missile battery to the Middle East to bolster an aircraft carrier force sent to counter alleged threats from Iran. 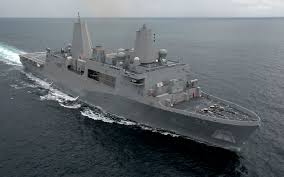 The USS Arlington, which transports marines, amphibious vehicles, conventional landing craft and rotary aircraft, and the Patriot air defense system will join the USS Abraham Lincoln Carrier Strike Group and a B-52 bomber task force headed toward the Gulf after intelligence reports suggested Iran was planning some sort of attack in the region.

The deployment is “in response to indications of heightened Iranian readiness to conduct offensive operations against US forces and our interests,” the Pentagon said in a statement. “The Department of Defense continues to closely monitor the activities of the Iranian regime, their military and proxies,” it said. The Pentagon added: “The United States does not seek conflict with Iran, but we are postured and ready to defend U.S. forces and interests in the region.”

Earlier, Iran announced that, in response to the new U.S. sanctions, it would abandon key portions of the so-called “nuclear agreement” which, as we reported Friday, was actually set up by the Obama regime and former Secretary of State John Kerry to provide a continuous revenue stream to the country:

There is a reason why POTUS Donald Trump believes that Obama’s second secretary of state, John Kerry, violated the Logan Act when he held secret negotiations with Iran last year: Because he thinks Kerry was trying to save a “nuclear deal” that included a generous revenue stream Tehran has used to spread terror that also threatens U.S. personnel.

As for the president, he says he wants some dialogue with Tehran. “What I would like to see with Iran, I would like to see them call me,” Trump told reporters at the White House. “We don’t want them to have nuclear weapons — not much to ask,” he added.

Cutting off Iranian oil shipments and ending the Obama-Kerry revenue stream is going to make Iran pretty desperate, and desperate nations tend to react in one of two ways: They talk, or they fight. The U.S., it appears, is preparing for either option.