Socialists Ganging Up With Islamists To Bring Down US 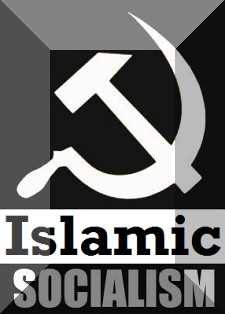 Bernie Sanders continues with Obama’s Fundamental Transformation of America: The Socialists and Islamists have OFFICIALLY ganged up against America in the prelude to the 2020 presidential election. Faiz Shakir is Bernie Sanders’ new campaign.

The not so long ago suspected nightmare of Socialists and Islamists working in tandem against the American people is now a reality unfolding before our very eyes that can no longer be written off as just another conspiracy theory.

Crickets followed Glenn Beck’s announcement on his radio show yesterday that “Faiz Shakir is Bernie Sanders’ new campaign manager. “Socialists and Islamists are working together for the destruction of the Free Market in the West and Israel,” Beck said. “That’s exactly what I laid out in the last chalkboard I laid out on Fox for the last year.”

Do the so-called ‘moderate’ ‘progressive’ Democrats know who Faiz Shakir is? You betcha! “Shakir was the Vice President of Communications for the Center For American Progress and their liaison for Barack Obama.  And as Beck reminds us, “remember, think how radical they were”. Shakir was also a senior advisor to former Senator Harry Reid and senior advisor to Nancy Pelosi.

Then there’s this telling little line from Wikipedia: “Sanders joined the 2020 race with the advantage of a large online donor base and having his policy ideas accepted into the Democratic mainstream”. That Sanders’  having his Socialist policy ideas “accepted into the Democratic mainstream” should be shouted from every rooftop. Ditto for Socialist Democrats having thrown in with the Islamists, Obama famously described the Islamic State as a “JV” team.

Sanders off the presidential hopeful line-up, but they likely won’t because Democrats—seeped in Saul Alinsky devil tactics—like all Socialists believe that the end always justifies the means. The Democrats patently ignore that Bernie Sanders continues with Obama’s Fundamental Transformation of America because they and their media running dogs think avenging their hatred of President Donald Trump is more important.

In short, both the Democrat Party and the media continue the wild goose chase to prove the Russians-stole-the-election-from-Hillary-Clinton conspiracy while completely ignoring that the Socialists have ganged up with the Islamists to bring down the country that pays their freight. God Help America! 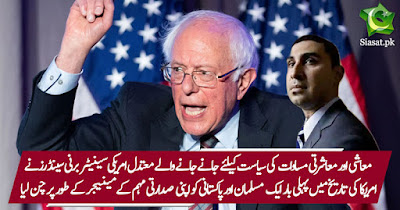 In a historic first, Vermont Senator Bernie Sanders, who announced his second presidential bid Feb. 20, has picked Pakistani American Faiz Shakir as his national campaign manager. “In hiring Shakir, Sanders brings into the fold one of the Democratic Party’s better-traveled operatives — an official with limited campaign experience but with ties to the party’s think tank infrastructure, its Hill operations, and the larger progressive universe,” reported The Daily Beast.

Born to Pakistani American parents, Shakir is the first Pakistani American and the first Muslim American to head up a U.S. presidential campaign. The veteran political operative, who has served in several roles within the Democratic party, rose to national prominence as the editor of the Web site ThinkProgress, which is associated with the Center for American Progress.

Shakir most recently served as the national political director with the American Civil Liberties Union, which has opposed President Donald Trump’s administration on several issues, including immigration. In a recent tweet, Shakir challenged Trump on his assertion that border crossing constituted a national emergency.

“Border crossing isn't a national emergency. Hurricane Katrina was. Imagine if the response to the actual emergency was to build a bunch of levees in New Orleans while the city was under water. Would that make sense? The Trump wall ‘solution’ tells you it's not an emergency,” Shakir tweeted.
Previously, Shakir served as senior advisor to now-retired Sen. Harry Reid, while the latter was the Senate Majority Leader. He has also worked with House Speaker Nancy Pelosi, D-California.

Shakir started out as a junior staff researcher for John Kerry’s campaign in 2004, Ozy.com reported. He was also vice president for communications at the Center for American Progress, The Hill reported.

Shakir is a graduate of Harvard and Georgetown University Law Center. He earned his bachelor’s degree in government at Harvard. He grew up in Florida and is a big fan of baseball which he played for four years at Harvard, as reported by heavy.com.

“While the ACLU does not endorse or oppose candidates for elected or appointed office, Faiz has picked his candidate for president," Romero said. "Senator Sanders is fortunate to have someone of Faiz Shakir’s talent, creativity and vision running his campaign for president.” Shakir advised Sanders’ 2016 run, which earned him the animus of former CAP executive director John Podesta, who was then the chairman of Hillary Clinton’s campaign. 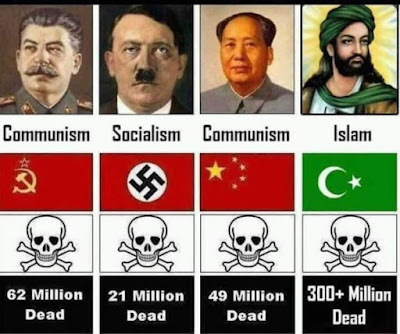