US Navy Gone Mad: No Urinals On New Carriers 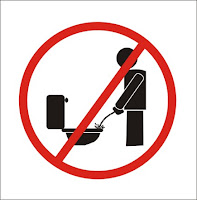 No urinals on the new Navy aircraft carrier: The new aircraft carrier Gerald R. Ford has all sorts of high-tech gear equipped for 21st century naval warfare. But there is one thing that male sailors will notice is no longer available: Urinals.

For the first time, every bathroom on the Ford — known throughout military circles as a head — is designed to be “gender-neutral,” meaning all of the urinals have been replaced with flush toilets and stalls, Navy officials say.

The vast majority of the 5,000-plus sailors who will deploy aboard the carrier Ford are men, as women account for only about 18 percent of sailors in the Navy. Bathroom design experts say water closets with seated toilets are less sanitary and take up far more space than wall-mounted urinals.


Nevertheless, the Navy says there are advantages to eliminating urinals. It will allow the Navy to quickly and efficiently change a head’s assigned gender, so depending on the ship’s demographics at the time, berthing areas can be switched between male and female to accommodate the crew’s needs.

“This is designed to give the ship flexibility because there aren’t any berthing areas that are dedicated to one sex or the other,” Operations Specialist 1st Class Kaylea Motsenbocker told Navy Times recently. Every head on the Ford is being integrated into a berthing, she said.

As such, the Navy claims that gender-neutral heads will make living aboard the Ford more convenient for sailors. Every berthing area on the ship has a head attached to it, and some heads service multiple berthing areas, giving sailors more privacy.

“So if this space was needed for males, we could shift the females to other berthing areas and make this all male without any modification being necessary,” Motsenbocker said. It’s a decision that comes as a surprise to many professionals who design restrooms.

“[A toilet is] by far a less clean environment than a urinal. By far,” said Chuck Kaufman, president of the Public Restroom Company, an organization that specializes in designing bathrooms. For men, traditional seated toilets are farther away, making them harder targets to accurately focus on. Thus, men who use a water closet are more likely to miss the bowl and hit the floor, says Kaufman.

He says that when men are obligated to pee in water closets, urine tends to build up on the floor, leaving an abysmal stench. “A urinal is a target,” said Kaufman. “What is a problem is [with a water closet] you have a very big target and we can’t aim very quickly.”

The only way to ensure men accurately aim into a toilet bowl is to force men to sit down, which is unlikely to happen, said Kaufman. Moreover, sitting down to pee makes trips to the bathroom take longer. Kaufman estimates that the average trip to the urinal takes a little under a minute. Meanwhile, peeing at a sit-down toilet takes twice as long, he said.

Whatever convenience that is gained by being able to morph men’s rooms into women’s rooms would also be lost in the amount of space that water closets, and the stalls around them, take up, he said. When he is designing a bathroom, Kaufman says he is required to allot around 1,500 square inches of space for a urinal. A toilet needs more than 3,300 square inches.

For a ship like the Ford, which cost upwards of $13 billion, every inch of space matters tremendously. “Why would you want the ship to be bigger just for fixtures?” said Kaufman. “You can get twice as many urinals as water closets.”

For now, the Ford will be the only Navy ship in the fleet that is entirely outfitted with gender-neutral bathrooms, said Bill Couch, a Naval Sea Systems Command spokesperson. Regardless, urinals on aircraft carriers may be a thing of the past. 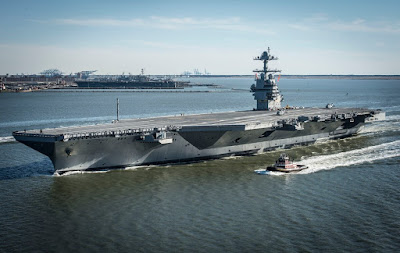