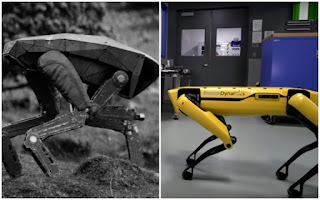 Black Mirror-like cyborg dogs have taken over public parks in Singapore and people are freaking out, Singapore has deployed a Boston Dynamics' Spot robot to patrol a popular park and relay pre-recorded messages 'to remind park visitors to observe safe distancing measures'.

At a time when simply sharing space with a fellow human can prove to be dangerous, many governments, airports, and hospital are replacing people with robots to limit the spread of the deadly virus that continues to spread rampantly across the globe.

Singapore has enlisted the services of a four-legged robot to patrol public parks and remind people to practice social distancing from Friday, May 8. The city-state's municipal authorities announced that it would deploy Spot, Boston Dynamics' famous yellow and black canine robot, at a local park to ensure cyclists, joggers, and other park-goers are following the rules, according to The Straits Times.

Starting today, a Spot unit will start patrolling the city's Bishan-Ang Mo Kio Park, relaying pre-recorded messages "to remind park visitors to observe safe distancing measures." The authorities claim the robots will not only reduce the need for staff to patrol the grounds but also "lowers the risk of exposure to the virus."


The robot will also be equipped with cameras that will scan its surroundings to allow officials to estimate the number of people gathering in parks. However, Singapore's National Parks Board (NParks) says it won't collect personal data or use the video to identify individuals.


Spot is controlled remotely, but comes with in-built sensors to avoid collisions and will be accompanied with a park ranger. Singapore's government says it singled out the Boston Dynamics' robot for its agility. "Unlike wheeled robots, Spot works well across different terrains and can navigate obstacles effectively, making it ideal for operation in public parks and gardens," it noted.

The pilot project is currently set to run in a limited trial for two weeks at the during off-peak hours. But if the trial is successful, the robot could earn a full-time gig during the park's busy hours. The authorities are also considering deploying these four-legged machines elsewhere in the city and for different purposes. The Singapore government is already using Spot robots at a local isolation facility to deliver medicines to patients.

Shortly after news of the deployment of the robot dog emerged, people are freaking out over the uncanny resemblance to the relentless cyborg dog from 'Black Mirror: Metalhead' to its real-life, yellow-bodied counterpart. Netizens have taken to social media to point out the similarities between the two machines:

"Singapore has a robot dog patrolling their parks. Well we've been warned," wrote one user along with side-by-side pictures of a sign at the park, asking visitors not to "disrupt" the robot on its patrols on the left and a poster of the relevant episode from the popular Netflix series.

(Is Singapore crazy or not? People obviously were alarmed and scared.)

SINGAPORE - A four-legged robot will be patrolling Bishan-Ang Mo Kio Park to remind people of safe distancing measures starting from Friday (May 8). Called Spot, the robot will assist with safe distancing efforts at parks, gardens and nature reserves managed by National Parks Board (NParks) and at parks managed by town councils.

The pilot trial is jointly conducted by NParks, and the Smart Nation and Digital Government Group (SNDGG). The Spot robot will broadcast a recorded message reminding park visitors to observe safe distancing measures.

It is fitted with cameras, enabled by GovTech-developed video analytics, to help it estimate the number of visitors in the parks. The cameras, however, will not be able to track or recognise specific individuals, neither will it collect any personal data.

As part of the two-week trial, Spot will be deployed over a 3km stretch in the River Plains section of the park during off-peak hours, and it will be accompanied by at least one NParks officer.

If the trial proves successful, NParks will consider deploying Spot for safe distancing efforts at Bishan-Ang Mo Kio Park in the morning and during evening peak-hours. NParks is also looking into deploying the robot at other parks such as Jurong Lake Gardens.

Originally developed by American company Boston Dynamics, the four-legged robot is able to navigate obstacles more effectively compared to wheeled robots, making it suitable for different terrains. It is also fitted with safety sensors to detect objects and people within 1m to avoid collision.

GovTech has enhanced Spot with various functions such as remote control, 3D-mapping and semi-autonomous operations to facilitate the trial. It is currently looking to develop analytics allowing Spot to check if park visitors are observing safe distancing measures.

As it is controlled remotely, less manpower is needed for park patrols, helping to minimise physical contact among staff, safe distancing ambassadors and park visitors. This helps to lower their risk of exposure to the Covid-19 virus.

NParks is also deploying 30 drones to detect visitorship at selected parks and nature areas. In addition, the Safe Distance At Parks portal lets the public find parks near them, as well as check the crowd situation at the parks before making their way there.

The Spot robot is also currently on trial at the Changi Exhibition Centre community isolation facility, which houses patients with mild symptoms, to help deliver essential items such as medicine to patients.

The SNDGG will also be exploring the use of the robot in supporting other Covid-19-related operations across agencies. Last month, an autonomous robot known as O-R3 was deployed at Bedok Reservoir Park by national water agency PUB as a kind of safe distancing ambassador.

The four-wheeled robot was originally used for surveillance, but it now broadcasts safe distancing messages at the park as it patrols the area in the mornings and the evenings when human traffic is at its highest. Similar robots will be deployed at Pandan and MacRitchie reservoirs.