No Rice In Australia By Christmas: Aussies To Eat Cakes

Coronavirus rice shortage brought on by water shortage and Vietnam ban: Supermarket shelves usually laden with rice are unlikely to be fully restocked in the short-term because of Australia's low rice production brought on by drought and lower water allocations.

Rice was the first staple food commodity to be restricted when COVID-19 panic buying stripped shelves. When coronavirus hit Australia and people raided the stores stockpiling toilet paper and hand sanitiser, rice also became a rare commodity very quickly. It was the first staple food to be restricted by retailers amid COVID-19 panic buying, as there just was not enough to go around.

Food Security Concern: SunRice chairman Laurie Arthur said it was the first time food security had been an issue in Australia in a long time. SunRice is one of the largest rice food companies in the world and one of Australia's leading branded food exporters. Mr Arthur said for rice to be rationed should serve as a reminder to governments about the important role of farmers feeding not only Australia, but also the world.


"It's caught us all by surprise as food security has been a dead issue in Australia for 50 years," Mr Arthur said. SunRice had expected to supplement its Australian-produced with imported rice from its processing plant in Vietnam. But Vietnam has reintroduced a ban on exports of rice in response to concerns around domestic food security due to continued localised drought and COVID-19. In a statement in the Australian Stock Exchange on Friday, the SunRice Group said it expected the ban to remain in place until at least the end of May.

No water, no rice: Australia's rice production is at a critically low level. Last year just 54,000 tonnes was harvested and it is forecast that this year's crop will be even smaller. According to AgriFutures Australia rice production in southern Australian averages 600,000–800,000 tonnes of rice per year, however depending on annual irrigation water allocations, production may be as high as 1.2 million tonnes.

There are 1,500 farm businesses registered to grow rice, however not all businesses grow rice each year. "We have had two of the smallest rice crops in Australia in the last 70 years, we are only able to grow 5 per cent of what we would normally grow, so rice stocks are very low," Mr Arthur said.

"We are not trying to fear monger, but I think it may be a bit of a wake up call to see what happens when our supply chains are tested." The significantly reduced rice crop due to drought and water allocation has led to SunRice reducing jobs and production at its Deniliquin and Leeton mills.

The rice industry has been plagued by drought and battling to compete with crops like cotton and almonds which in recent years have offered more lucrative returns to farmers for each megalitre of water used to grow them.

In an effort to lure farmers back to growing rice, processor SunRice offered growers a record high price of $750 a tonne for their rice, and while the money was good, growers couldn't commit without water. Water is scarce and is being sold for exorbitant prices making it impossible for growers to put crop in the ground.

Mr Arthur will harvest 40 hectares of rice on his farm at Moulamein in the southern Riverina next month, which he said would produce 310,000, 1 kilogram bags of rice. It shows that the rice industry has the ability to produce a prodigious amount of food for the population," he said.

"We need only need a very little amount of water, just 3 per cent of the water in the Murray-Darling Basin that is diverted down the river — not running down the river — is all that we would need to grow Australia's entire requirements for rice. "But at the moment under water reform and drought we are unable to get access to that water."

Despite channels being brim full with water in the NSW Murray region many farmers have not been able to afford to buy water to plant rice. Some farmers have also opted to sell water instead of grow a crop. 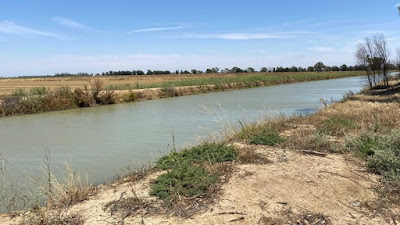 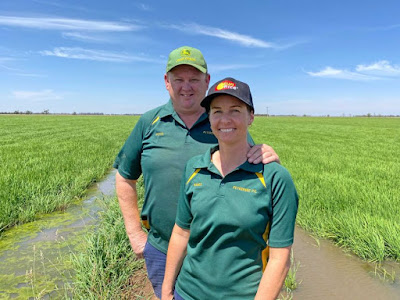 Peter and Renee Burke farm at Jerilderie in the NSW Murray region where they have been forced to endure two years on a general water allocation of zero per cent. Their cropping program represents the demise in water supply; three years ago they grew 700 hectares of rice, last year they grew 220 hectares and this year they will harvest just 80 hectares. "It is declining, but we are proud we have been able to keep growing it," Mr Burke said.

To ensure they could grow some rice this year they carried over water from other years. "It would have been easier for us not to grow a crop this year and just sold the water and moved on," Mr Burke said.

"But at the end of the day we are farmers and very proud to be rice growers and we chose to grow it, even though we would have been better off to sell all the water with prices at more than $600 a megalitre. For us we prefer to farm and it's nice to have something to get up to do in the morning, we don't like to miss out on rice" he said.

The Burkes, who are the current SunRice Growers of the Year, are confident the Riverina will remain as the country's rice bowl. "I think it will come back, we just need to add water and add rain," Mr Burke said. "If we can get the dams full it will take off again, to what degree will depend on how much flooding and rain we get." 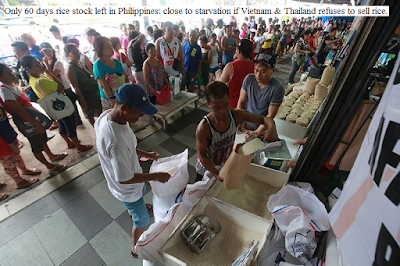 BANGKOK/MANILA -- The rapid spread of new coronavirus cases in Southeast Asia has exposed the region's divisions on food security, particularly as rice-growing nations move to lock up supplies of the staple.

In Thailand, the world's second-biggest rice exporter, a curfew imposed on April 3 is driving consumers to hoard rice for fear of a prolonged stay-at-home order. Meanwhile, Vietnam, the third-largest exporter, imposed a rice export ban on March 24, with Cambodia following suit.

Such actions by major rice growers have raised concerns in importer nations and prompted senior officials from the Association of Southeast Asian Nations members to hold an urgent meeting earlier this month to seek ways of securing food supplies in the 10-nation regional bloc.

"We basically agreed that ASEAN nations should keep their trade open to allow all members access to goods, particularly food," Oramon Sapthaweetham, director-general of Thailand's Department of Trade Negotiations, told the Nikkei Asian Review. "However, each country should have their own right to take any action to secure their food security as Vietnam did. That's why we need more time to reach an agreement," she added.

With its export ban, Vietnam took extra steps to secure rice for domestic consumption. Despite the requests from exporters and domestic industry to remove or ease the restrictions, Vietnam's Ministry of Finance suggested on April 10 extending the embargo on low-grade rice until June 15 to ensure purchases for the national reserve, which is set to reach 190,000 tons. It came after Hanoi's move to set a quota of 400,000 tons of rice for export.

Cambodia had followed Vietnam's step for the same reason, creating anxiety among rice-importing ASEAN countries -- particularly the Philippines. The region's biggest rice importer bought 2.9 million tons last year and is forecast to import around 2.5 million this year, largely from Vietnam.

"At least 200,000 to 500,000 tons of rice are now being held up at ports in Vietnam and Cambodia, and these delayed shipments have caused supply tightness in some counties," said a Singapore-based trader. 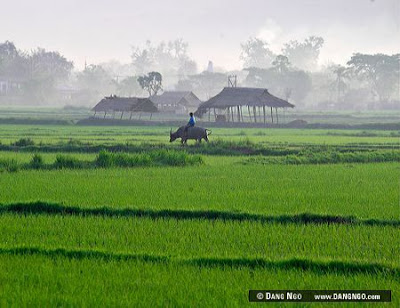 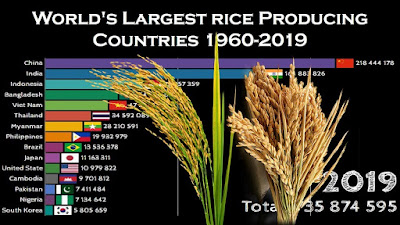 Rice is not only a major staple in ASEAN countries, but also a politically and emotionally charged commodity, particularly for importers such as the Philippines and Indonesia, where governments face pressure to satisfy domestic consumption and keep inflation low. In contrast, major rice exporting countries, such as Thailand and Vietnam, need to keep domestic rice prices high to maintain the support of poor farmers.

This year, severe drought in Thailand and Vietnam, as well as strong purchase from Asian buyers, have pushed global rice prices to a 7-year-high. As a result, Thai exporters are reluctant to commit to deals with the Philippines when it approached Thailand for rice after Vietnam imposed its export ban.

Although Vietnam's deputy minister for agriculture and rural development, Le Quoc Doanh, said Hanoi will honor its export commitments to the Philippines, it is unlikely that Vietnam can delivery rice to Manila immediately as orders from China skyrocket.

China's rice import from Vietnam increased 595% to 66,000 tons during the first two months of 2020. Besides, there was also an increased importing trend from other markets, such as Iraq, Malaysia, France, Taiwan, Senegal, and Russia.

That has forced Manila to seek rice from Myanmar, but that country's government also suspend rice export licenses, making it hard for the Philippines to secure immediate supplies of the staple. As of the end of March, the Philippines has a total rice inventory good for 75 days, and by the end of June, inventory is projected at only 67 days. Philippines is very close to explosive no-rice situation.

For Indonesia, although the government said it has 3.5 million tons of rice stockpiled, it said last month it was still open to possibilities of import if the coronavirus situation drives rice prices up -- as it has done with garlic and sugar prices -- to curb inflation. Indonesia imported 600,000 tons of rice last year and is forecast to import around 1 million tons this year, according to the U.S. Department of Agriculture.

The world's biggest rice exporter, India, also faces trading hurdles as the country imposed a sweeping lockdown that has completely disrupted exports. The country exported 9.8 million tons last year. "Rice-importing countries are struggling to get rice at this moment and it would get worse if the outbreak lasts longer than a few months from now on. That could mean longer rice export bans in some exporting countries," said a Bangkok-based trader.

Philippine President Rodrigo Duterte voiced his concerns during an ASEAN video summit held on Tuesday. "We are particularly concerned with food security in this period of lockdowns," Duterte said. "Our most urgent priority is ensuring sufficient supply of rice for our people."

The Philippine leader stressed that the bloc must remain "open for trade, crisis or no crisis, as no country can stand alone. Let us, therefore ensure the supply chain connectivity and the smooth flow of goods within our region." 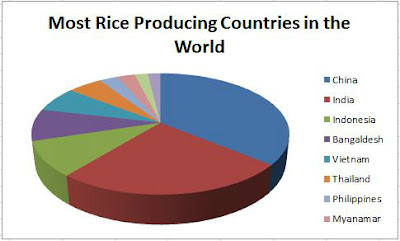 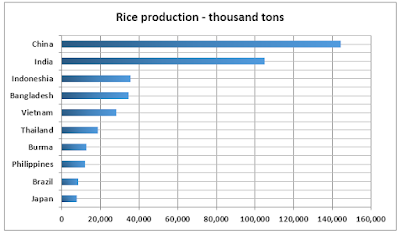 (Blogger's Notes: White rice is basically a solidified starch water. To grow rice one needs a lot of water especially during the planting. Rice from places like Burma, Vietnam,and Thailand are the best quality because of the abundance of rain water there from Monsoon. Rice there is so full of moisture, for example, to cook one cup of Thai rice you need to add only one cup of water. But rice from places like Australia with limited water available the rice is so dry to cook one cup of Aussie rice one needs at least 2 cups of water.)
Posted by Hla Oo at 1:44 AM