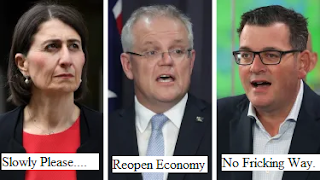 Premier Gladys Berejiklian announced on Sunday that outdoor gatherings of up to 10 people will be permitted and people can have five visitors at any one time. Cafes and restaurants will also be able to have up to 10 people dining in.

Weddings will be allowed to have up to 10 guests while funerals can accommodate up to 20 mourners indoors and 30 outdoors. The rules have also been relaxed for places of worship, where there can now be up to 10 people at religious gatherings. Outdoor gyms and playgrounds will open and outdoor pools with restrictions.


But New South Wales does not intend to follow the National Cabinet's plan to permit local and regional travel. Ms Berejiklian said it was too soon to let people take regional holidays. Scott Morrison said each state and territory could decide how much restrictions were relaxed.

Unlike other jurisdictions, the Berejiklian Government has taken two days to decide whether to start reopening the state after National Cabinet met on Friday morning. "My firm position during the crisis has been to follow the health advice and do what's best for New South Wales," Ms Berejiklian said.

"We will continue to closely monitor COVID-19 rates, especially community transmissions, to guide us towards easing further restrictions." The state's Chief Medical Officer, Kerry Chant, has also backed the move to relax restrictions.

"The chief health officers of the Commonwealth and states supported by experts have prepared advice on the way forward," Dr Chant said. "As we take this next step we need to continue to work together — governments, community, business and NGOs — with high rates of testing, social distancing and adherence to other public health measures like handwashing and staying at home if you show even slight symptoms."

To keep the COVID-19 outbreak under control we need to keep growth factor below 1.0. Australia's current growth factor is 1.00. Average 17 cases per day for the past 7 days from 29-March to 12-May.

New South Wales had already started slightly relaxing restrictions. A week ago, two adults plus children were allowed to visit a house. From Monday, schools will start a staggered return and the Government has also been encouraging retail outlets to open. The National Cabinet has agreed to step two and three of easing lockdown measures but the NSW Government has yet to consider its own plans.

NSW pubs and clubs to reopen on Friday for dining

It puts them in line with restrictions regarding cafes and restaurants. Restaurants and cafes in pubs and clubs will be able to open so long as they adhere to social-distancing requirements. Bars and gaming facilities will remain closed, however table service for alcohol with a meal will be allowed.

Takeaway services can continue to operate as at present. "This is an important first step, and we want it to be a success, so that as venues transition back from closure they do so safely both for their staff and their customers," Treasurer Dominic Perrottet said.

Deputy Premier John Barilaro said this would be a real boost for clubs and pubs across regional NSW. "It's been a tough few months but we are starting to see some wins, first on the health front and now in getting the economy back, and this is welcome news for many regional towns."

Customer Service Minister Victor Dominello said the Government would continue to review the success of the first stage of re-opening and adjust as required. "Everyone in NSW has done a great job in controlling COVID-19, now as we can begin to open up it will be up to everyone to ensure they follow health guidelines."

Premier Gladys Berejiklian announced last Sunday that outdoor gatherings of up to 10 people would be permitted from Friday. People will also be allowed to have five visitors in the home at any one time.

Weddings will be allowed to have up to 10 guests while funerals can accommodate up to 20 mourners indoors and 30 outdoors. The rules have also been relaxed for places of worship, where there can now be up to 10 people at religious gatherings. Local and regional travel is still not permitted, however, even though restrictions now permit people to be outside for recreational purposes.

NSW today recorded six new confirmed cases of COVID-19. It also reported one more death linked to the Ruby Princess, which brings the state's total number of deaths to 47.

Sky News host Peter Gleeson says Tasmanian Premier Peter Gutwein must be “roundly condemned for this ham fisted over reach” as the Premier extends the ban on all racing in the state for an additional five weeks.

While many industries across the country have ground to a halt, racing in most states has remained, but in Tasmania it has “not been operational for eight weeks”. Mr Gutwein announced last week the ban will be extended until June 13 despite Tasmania’s racing industry “saying it’s on its knees”.

Mr Gleeson said although Victorian (Socialist) Premier Daniel Andrews is a standout as the politician who has “handled this crisis the worst of any leader,” Premier Gutwein wins the “gold star for worst decision of the crisis”.

“The Tasmanian racing industry employs thousands of people; they have essentially needlessly put their lives on hold during this ban,” he said. “I will bet London to a brick on this madness costing Gutwein votes at the next election; punters and industry participants have long memories”. 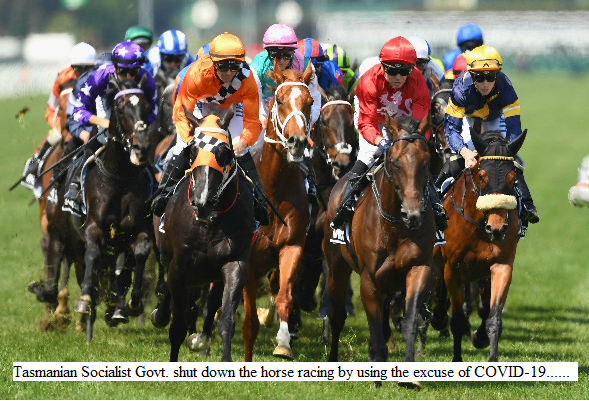