Two weeks ago, Gov. ­Andrew Cuomo was first asked about his policy that forced nursing homes to admit ­patients infected with the coronavirus. “That’s a good question, I don’t know,” the governor answered, turning to an aide.

On Tuesday, Cuomo was asked about a report from the Associated Press that his team had added more than 1,700 deaths to the count of those who died in nursing homes, bringing the total to at least 4,813. “I don’t know the details, frankly,” the governor answered, turning to an aide.

Cuomo is legendary for micromanaging and has been praised for his detailed daily briefings during the pandemic. He has closed schools, religious services and businesses because each human life is “priceless.”


So with known nursing home deaths representing 25 percent of all deaths in the state, it beggars belief that the governor didn’t know anything about his office’s fatal policy two weeks ago or the new death totals now.

The only way either could be true is through an extreme case of plausible deniability. Thus, if there’s no proof he knew, he can’t be held responsible, right? Which was the whole point of the Sgt. Schultz defense. That was a sitcom. This is life and death.

And if you are the governor of the state that is the national epicenter of the deadly outbreak, you don’t have the luxury of not knowing, or pretending not to know, about the horrendous carnage in nursing homes and rehabilitation centers. And if your policies contributed to that carnage, the decent thing to do is to own your mistakes and fix them.

In fact, Cuomo does claim to know something about nursing homes and COVID-19 patients. He says the former can refuse to take the latter. “The nursing home has to make the decision,” he said Tuesday. “If they don’t think they can take care of someone, all they have to do is say no.”

In this case, he “knows” something that’s simply not true, according to nursing home executives. The March 25 order that forced infected patients on them allows for no exceptions and has not been changed. 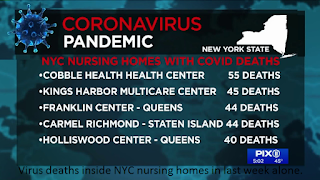 The killer fifth paragraph still reads: “No resident shall be denied re-admission or admission to the NH solely based on a confirmed or suspected diagnosis of COVID-19. NHs are prohibited from requiring a hospitalized resident who is determined medically stable to be tested for COVID-19 prior to ­admission or readmission.”

Owners and managers said Tuesday they are not aware of any loosening of the policy. They also say that hospitals still are referring infected patients to them on a near-daily basis and they are expected to take them if they have an empty bed.

To them, the March 25 order was a death sentence. Some facilities say they had no deaths or even positive patients before that date, but many of both since, including among staff members.

Recall, too, the experience of Donny Tuchman, CEO of Brooklyn’s Cobble Hill Health Center. On April 24, when his facility already had lost 55 patients, he showed reporters email exchanges with the Department of Health where he got no help when he asked for relief. Even his ­request to have some of the ­COVID-19 patients sent to the Javits Center or the Navy ship Comfort, both of which were well below capacity, was rejected.

As the Post front-page headline said the next day, “THEY KNEW,” meaning the state could no longer pretend it had no idea of the chaos it inflicted on nursing homes. Cuomo, in response, has constructed an evolving litany of self-defenses, once coldly asserting it was “not our job” to help the homes get protective equipment for their staffs, even as other officials said the equipment was being provided.

His office claimed the state policy mirrored federal policy, which, as the AP noted in its report, isn’t true. The feds never mandated that nursing homes be forced to accept COVID-19 patients.

On other days, Cuomo threatened to remove the facilities’ licenses and warned them against committing perjury in their death reports. Flexing his power to punish them, he launched, with the state attorney general, an investigation of the facilities. For the owners and staffs, the threats were a warning to be silent and the investigation is a bid to pin the blame for thousands of deaths on them.

Two other things Cuomo said Tuesday also bear remembering. First, he allowed that “we did some very harsh things” to nursing homes that “frankly, I wasn’t comfortable with.” He then cited the order barring visitors for the last two months.

It was indeed harsh, especially for the families who never saw their loved ones again before the virus killed them. By the same token, those families want to know why in the world the state would bar them from nursing homes but simultaneously impose infected patients on the same facilities.

Finally, on Tuesday, after an aide tried to explain the differences between “confirmed” and “probable” death counts, the governor interjected that “I would take all the numbers now with a grain of salt.” So never mind? 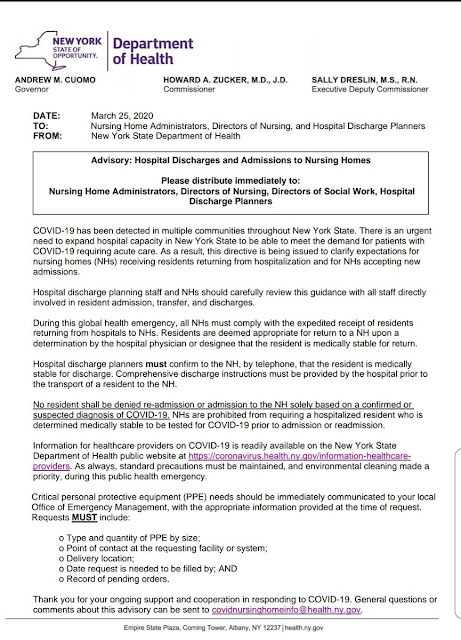 NEW YORK -- New York Gov. Andrew Cuomo, who has won bipartisan praise for rallying supplies for his ravaged hospitals and helping slow the coronavirus, is coming under increasing criticism for not bringing that same level of commitment to a problem that has so far stymied him: nursing homes.

In part-lecture, part-cheerleading briefings that have made him a Democratic counter to President Donald Trump, Cuomo has often seemed dismissive and resigned to defeat when asked about his state leading the nation in nursing home deaths. “We’ve tried everything to keep it out of a nursing home, but it’s virtually impossible,” Cuomo told reporters. “Now is not the best time to put your mother in a nursing home. That is a fact.”

Residents’ relatives, health care watchdogs and lawmakers from both parties cite problems with testing and transparency that have prevented officials — and the public — from grasping the full scale of the catastrophe.

And they are second-guessing a state directive that requires nursing homes take on new patients infected with COVID-19 — an order they say accelerated outbreaks in facilities that are prime breeding grounds for infectious diseases.

“The way this has been handled by the state is totally irresponsible, negligent and stupid,” said Elaine Mazzotta, a nurse whose mother died last month of suspected COVID-19 at a Long Island nursing home. “They knew better. They shouldn’t have sent these people into nursing homes."

Of the nation’s more than 26,000 coronavirus deaths in nursing homes and long-term care facilities, a fifth of them — about 5,300 — are in New York, according to a count by The Associated Press, and the toll has been increasing by an average of 20 to 25 deaths a day for the past few weeks.

“The numbers, the deaths keep ticking up," said MaryDel Wypych, an advocate for older adults in the Rochester area. “It's just very frustrating.” Cuomo faced criticism at a recent briefing for saying that providing masks and gowns to nursing homes is “not our job” because the homes are privately owned.

“It was such an insensitive thing to say,” said state Assemblyman Ron Kim, a Queens Democrat who noted that it wasn’t until just this past week that New York and neighboring states announced a plan to combine forces to buy protective gear and medical supplies for nursing homes. “If we had focused on that early on,” he said, “we could have saved a lot of lives.”

Cuomo’s administration defended its response to the crisis, saying it has provided more than 10 million pieces of protective equipment to nursing homes and created a database of 95,000 workers who have helped out in hundreds of New York homes.

“This was an overwhelming situation for everyone,” said Jim Malatras, who serves on the governor’s COVID-19 task force. “There were deaths and it’s unfortunate. But it doesn’t mean we weren’t aggressive.”

One key criticism is that New York took weeks after the first known care home outbreaks to begin publicly reporting the number of deaths in individual homes — and still doesn’t report the number of cases. By the time New York began disclosing the deaths in the middle of last month, the state had several major outbreaks with at least 40 deaths each, most of which were a surprise to the surrounding communities and even some family members.

“They should have announced to the public: ‘We have a problem in nursing homes. We’re going to help them, but you need to know where it is,’” said former New York Lt. Gov. Betsy McCaughey, a Republican who now heads the nonprofit Committee to Reduce Infection Deaths. “Instead, they took the opposite tack: They hid it.”

Further, there has been a lack of testing in several recent New York outbreaks, including one that killed 98 residents, many of whom died with COVID-19 symptoms without ever being tested. Unlike West Virginia, New York has not mandated testing in its more than 1,150 nursing homes and long-term care facilities. Nor has Cuomo followed the lead of such states as Maryland, Florida, Tennessee and Wisconsin in dispatching National Guard teams to homes to conduct testing, triage and some care. 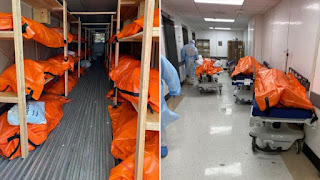 “A number of nursing homes have felt constrained by the order and admitted hospital discharged patients without knowing what their COVID status was,” said Chris Laxton, executive director of the Society for Post-Acute and Long-Term Care Medicine. “This order made an already difficult situation almost impossible.”

The order, similar to one in neighboring New Jersey, was intended to help free up hospital beds for the sickest patients as cases surged. But critics have suggested nursing homes were already overwhelmed and a better solution might have been sending them to the virtually empty Jacob K. Javits Convention Center, which was retrofitted to treat COVID-19 patients, or an even less utilized Navy hospital ship that has since left Manhattan.

As the virus was racing through his nursing home, the head of Brooklyn’s Cobble Hill Health Center frantically emailed state health officials April 9 asking just that. "Is there a way for us to send our suspected covid cases to the Javitz center or the ship?” Donny Tuchman wrote. Tuchman said he was denied permission. Eventually, more than 50 residents at his home would die.

Added the lawmaker Kim: “We could have figured out how to isolate these folks. We failed to do that.” Rich Azzopardi, a senior advisor to Cuomo, said controversy over use of the convention center and the hospital ship is a “red herring” because patients discharged to nursing homes were “outside of what the feds would accept” at those facilities.

A state Health Department spokeswoman added the state is not tracking how many COVID-infected patients were admitted to nursing homes under the directive but homes should not take on new patients if they are “not medically prepared” to meet their needs.

“Throwing in new residents who may or may not have been stable at that point could not possibly have been to the benefit of any facility,” said Dr. Roy Goldberg, medical director of the Kings Harbor Multicare Center, a nursing home in the Bronx that has seen 56 deaths. 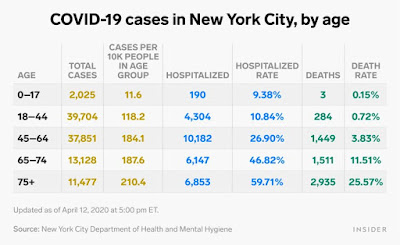