Australian Gyms Will Re-open Soon, But With Catch-20 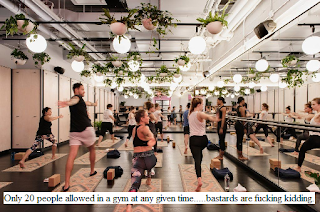 In what will no doubt be news to the ears of Australians everywhere, you will soon be able to don your best gym gear, dust off your training shoes and forget all about home ‘grim gyms’, as ‘proper’ gyms in Australia can soon re-open their doors to paying members…albeit with a slight catch.

Australian Prime Minister Scott Morrison has today (Friday 7th May) announced a plan toward lifting the restrictions currently in place, “Today, National Cabinet agreed a three-step plan and a national framework to achieve a COVID-safe economy and society. It is our goal to move through all of these steps to achieve that COVID-safe economy in July of this year.”

Restaurants and cafes fall into the stage one category, meaning they will be among the first to re-open, and perhaps more importantly, outdoor bootcamps of up to 10 people can resume as part of the stage one relaxation as well.


But full-scale gyms won’t be too far behind as they’ve been deemed worthy of securing a place in the stage two category. While that would initially seem like great news for fitness fanatics all over Australia, there is some bad news hidden within the announcement.

As part of the relaxing of restrictions, Prime Minister understandably says we still need to be careful and take precautionary methods so as not to reintroduce the virus into society. According to ABC, that means only 20 people will be allowed entry into gyms at one time.

That’s fine if you’re a member of a private or less-frequented club, but members of the larger corporate studios may find themselves waiting in a queue outside the door operating on a one-in, one-out policy.

We’re just projecting with that last part, so don’t take that as gospel. Although, there is potentially some truth in our prediction, as F45 has said (before the National Cabinet outcome was announced) it is currently taking “registrations of interest” from current members to be part of the “opening intake” when studios re-open. The company’s reasoning being “there are likely going to be restrictions on capacity.”

Harsh? Maybe. Understandable? Definitely. We haven’t heard of other clubs adopting a similar policy as of yet, but you’ll do well to prepare yourself to be one of the first past the post if you want a chance of rebuilding those gains.

The PM added that it will be down to individual states and territories to decide when to introduce the changes (NSW Premier Gladys Berejiklian has already said any outcomes of this National Cabinet won’t be introduced this weekend) and also revealed: “some jurisdictions may allow larger numbers in some circumstances.”

Fitness Australia, the leading fitness body in the country has already commented on the lifting of the laws, saying “today’s announcement that will see the delivery of outdoor bootcamps up to 10 people occurring in Stage 1 and gyms re-opening in Stage 2, has been welcomed by Fitness Australia.”

The body’s CEO Barrie Elvish added, “With exact timing of re-openings to be determined at a state and territory level, Fitness Australia has been working extensively state governments to develop a comprehensive framework for the safe re-opening of gyms”

“Exercise and maintaining a regular fitness routine play an important role in keeping our mental and physical health in balance and we are very happy to see outdoor and then indoor activity playing a key role in each of the roadmap stages”.

Interestingly, Fitness Australia doesn’t mention the 20 person limit, so this could be one area that will be at the discretion of individual states.

Following stage two will, naturally, be stage three, which will see Australians return back to work, gatherings of up to 100 people being allowed and pubs and bars opening their doors to thirsty patrons. The changes implemented at each stage will be closely monitored by the Government to make sure no new cases, or at least, very new cases are reported. 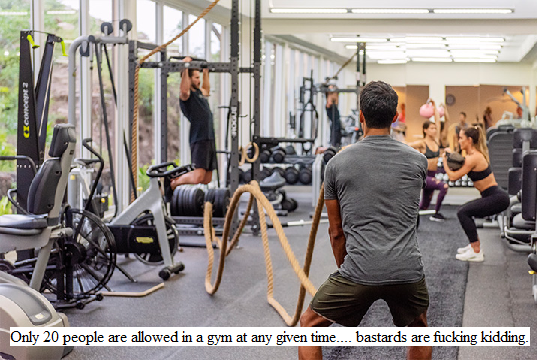 A revolution’s afoot. As Australia’s gyms shut their doors, many thought the nation would descend into dad bods and jiggle bellies. How wrong they were. Instead, it appears, every Aussie and their dog are running the country’s boardwalks into dust.

“There are way more people than usual, no one really respecting social distancing… people running very close to other people and almost touching them when running past,” one Northern Beaches local told 9 News last week. Shirt hanging out of shorts, pecs bouncing, skin turning Merlot-red, sweat pouring from temples, running seems to have gone from ‘that thing some people do’ to Australia’s number one hobby.

Aside from inspiring a new branch of clickbait literature “the one person you should avoid at all costs,” this new trend has posed some legitimate health concerns. Without jumping on the drama bandwagon, it’s true that running involves excreting a great deal of bodily fluid.

It’s also true that with so many people out of a gym (and with two hours extra a day to kill, working from home, or out of a job altogether), the nation’s running trails and boardwalks are arguably seeing higher usage than before the lockdown. Ironically, this makes it harder to do what is now crucial – to give each other a bit of space (at least 1.5 metres).

For those Australians that face this dilemma of wanting to run (after all there’s only so many home-workouts you can do before you fancy a change of scenery) and who want to limit their chances of getting the virus or infecting others, here’s what you need to do.

Drawn from the tips David Nieman, Dr.PH., health professor at Appalachian State University and director of the Human Performance Lab at the North Carolina Research Campus, and Brian Labus, Ph.D., MPH, assistant professor in the School of Public Health at the University of Nevada Las Vegas recently gave Runner’s World, here’s what you need to know before running right now in Australia.

* Run alone: even if if you’re technically allowed to exercise with your live-in partner, it’s better to run solo as you are not so hard to overtake
* Run outside of peak times: avoid the 7 to 8am pre-work rush-hour, and the 6 to 7pm blow off steam session
* Run in less crowded areas: make like a surfer, shrug off the crowds
* Don’t touch things if possible: and if you do, don’t touch your face until you’ve washed your hands
* Reap the health benefits of keeping fit: there’s a reason you’re doing it, after all

(Blogger's Notes: All the Australian governments of states and territories shut all the gyms down promptly the day Scott Morrison the PM announced the national lockdown on March-23. But the state premiers are now refusing to re-open the gyms like those democrat governors in US are doing against their federal government's will. These buggers do not realise how crucial gyms are for many Australians. Shutting down gyms for a long stretch of time is basically killing more people than the Chinese Corona Virus itself has done here in Australia.

For example I myself have had chronic hypertension and overweight problems. If I don't go to gym at least three days a week 3-4 hours a day my blood pressure and my weight shot up and some mornings I can't even get out of my bed. Now my fucking BP is 139/89 and I gained 10 kg more thanks to the fucking lockdown bullshit. The government is basically killing me slowly by shutting the gyms down, fucking Socialist bastards.)