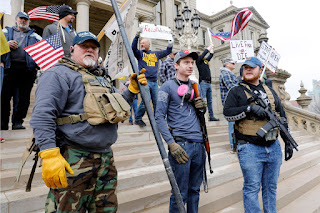 LANSING, Mich. – A large group of demonstrators – many not wearing masks and some carrying rifles on their shoulders – crowded into the lobby outside the state House chambers Thursday, shouting to be allowed onto the House floor, during a protest at the Capitol against Michigan's state of emergency.

Michigan State Police troopers, wearing face masks, formed a line between the demonstrators and the entrance to the House floor, which is off-limits to the general public. "Let us in," the protesters shouted, in some cases within a few inches of the police officers' faces. At least one state senator expressed worry when she saw demonstrators shouting and carrying firearms in the public gallery.

"Directly above me, men with rifles yelling at us," Democratic state Sen. Dayna Polehanki posted on Twitter, along with a photo. "Some of my colleagues who own bullet proof vests are wearing them. I have never appreciated our Sergeants-at-Arms more than today."


Open carry of firearms is allowed both on Capitol grounds and inside the Capitol, said Lt. Brian Oleksyk of the Michigan State Police. “There’s always a risk, but we were prepared for it," he said. "People are allowed to exercise their right to freedom of speech and their right to open carry. We always kept an eye on it.”

He said "people were just venting their frustrations in a loud manner" outside the House chamber, but "once they were able to do that ... people were pleasant and polite.” Earlier, a few hundred demonstrators gathered under light rain outside the Capitol, urging lawmakers not to extend Michigan's state of emergency related to the coronavirus pandemic.

They carried signs that read "Impeach Whitmer," "You're Killing Small Businesses," and "Liberty or Death." Many also wore hats or carried other paraphernalia touting Republican President Donald Trump and his 2020 reelection campaign.

The demonstrators got their wish in that the Republican-controlled Legislature did not vote to extend Michigan's state of emergency, as requested by Democratic Gov. Gretchen Whitmer. However, Whitmer says the state of emergency continues by executive order.

A large number of vehicles blocked most of Allegan Avenue, which runs by the side of the Capitol. There were also a few counterprotesters. One man drove a large truck by the Capitol, shouting: "Go home, rednecks – go home!" into a loudspeaker. Overall, the rally was considerably smaller than an April 15 event that drew thousands to the Capitol to protest Whitmer's stay-at-home order, which is currently scheduled to run through May 15. 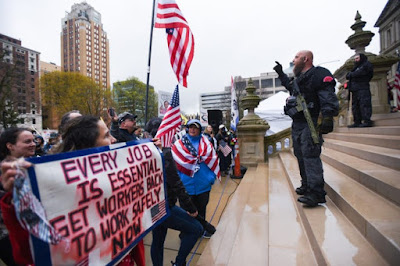 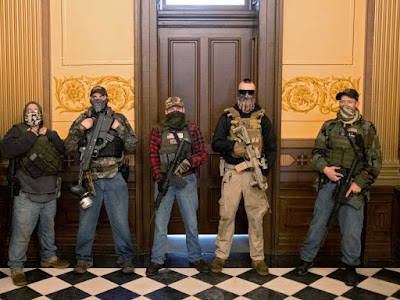 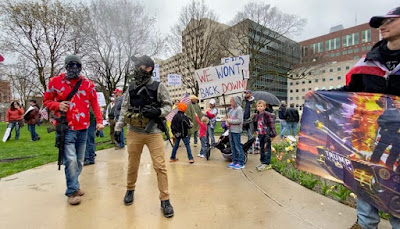 After the announcement from Governor Whitmer that she is going to extend the stay at home order in Michigan until May 15th, lawmakers in the state have had enough. A group of Michigan lawmakers from both chambers are fed up and they are stepping in to curb the totalitarian governor. When Whitmer found out and was asked about lawmakers’ plans she sounded like Joseph Stalin. 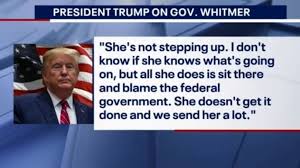 There are two ways Republicans are attacking Whitmer, first, they are going to pass bills that limit her authority, which would require her signature. “I’m not going to sign any bill that takes authority away from me,” she gasps.

“Of course, I will veto bills that they send over to limit the executive power. I’ve been very clear about that from day one,” she said Thursday. “Those blatant power grabs are bad in good times and dangerous in times of crisis.”

Lawmakers have one more trick up their sleeve, they are putting together a special oversight committee. Michigan House Speaker Lee Chatfield wrote, “The House & Senate will convene tomorrow to create a special oversight committee on COVID-19 to examine our government’s response. Michigan needs to handle this pandemic seriously yet properly. It’s what the people deserve, and we will see that it happens.”

Chatfield also noted that marijuana, lottery tickets, and alcohol have been declared “essential,” but lawn care, construction, and fishing in a motorized boat are nonessential. 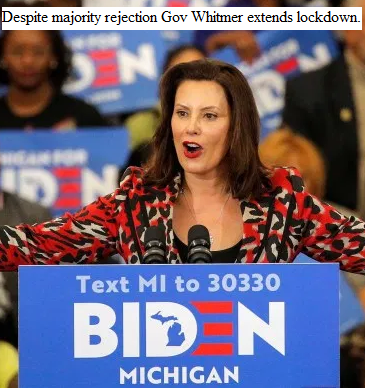 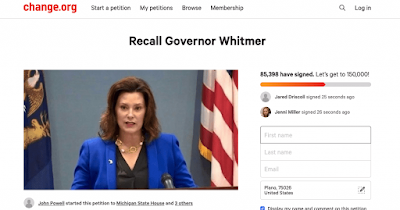 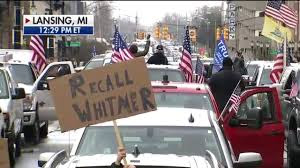 Whitmer extending state of emergency to End of May

Michigan Gov. Gretchen Whitmer (D) announced Thursday that she is extending her state’s emergency and disaster declaration that was set to expire on Friday until May 28. “COVID-19 is an enemy that has taken the lives of more Michiganders than we lost during the Vietnam War,” Whitmer said in a statement. “While some members of the legislature might believe this crisis is over, common sense and all of the scientific data tells us we’re not out of the woods yet," she added.

Lawmakers in the Republican-controlled state legislature have said they are planning to sue Whitmer over her exercise of state emergency powers during the coronavirus pandemic, according to the Detroit Free Press. The legislature failed to approve Whitmer’s order to extend the declaration, leading her to pass it via an executive order.

The emergency declaration gives the governor certain powers pertaining to emergency orders, such as the stay-at-home order she issued last month. “By refusing to extend the emergency and disaster declaration, Republican lawmakers are putting their heads in the sand and putting more lives and livelihoods at risk,” Whitmer said.

On Thursday, protesters swarmed the state capitol — some carrying rifles on their shoulders — demanding an end to the state of emergency. Earlier this month, Whitmer faced protests for her stay-at-home order, organized by mostly conservative organizations. Whitmer called the protest a “political rally” that could lead to more infections, and subsequently a longer stay-at-home order.

As of Thursday evening there are 41,379 confirmed cases of coronavirus in the state, and 3,789 deaths from the disease. That’s fourfold and tenfold increases, respectively, since the start of April, according to the governor.

And while the coronavirus has wreaked havoc on the physical health of Michigan residents, the governor also noted the economic effect that the virus has had on the state. In a one-month period, 1.2 million people in the state have filed unemployment claims, accounting for nearly a fourth of the state’s workforce. “As a result, many families in Michigan will struggle to pay their bills or even put food on the table,” Whitmer said. 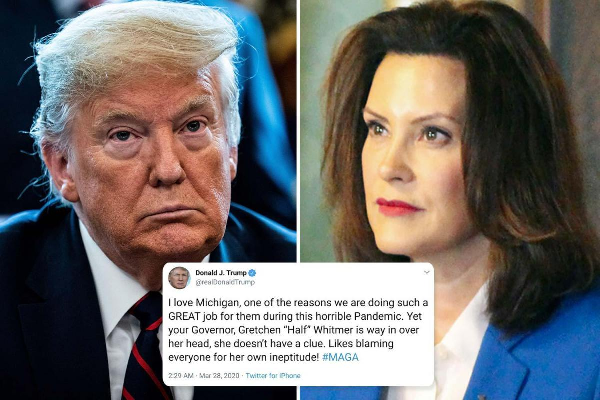