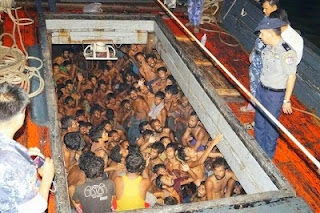 Anchor Woman: Rakhine State Chief Minister U Maung Maung Ohn, Member of Emergency Management Leading Committee for the illegal migrants in the sea, Deputy Minister for Immigration and Population U Win Myint together with Special Envoy to the UN Secretary-General Vijay Nambiar and officials on May 23 visited the temporary relief camp at the Alae Than Kyaw village in Maung Taw Township that was opened for boat people.

Deputy Director General, Maung Daw District Immigration Officer, Saw Naing: There are many boat people here. A group led by Lieutenant Commander Kyaw Zayar Oo from Myanmar navy ship No.568, found a boat loaded with boat people, stranded at the Myanmar's sea territory. There are 208 boat people on it. All are boat men, including helmsman, and there are 17 crew members and 3 Bangladeshi interpreters.

They found two trawlers, one is loaded with 208 people and the other one is just empty. The trawler is 68 feets in length and 17 feet in width. According to them, both of the trawlers can carry at least 400 people. We provided shelter and humanitarian assistances to them as well as informed to the concerned regional officials.

AguMaw Port is far 3 hours drive from Maungdaw District, kind of 40-48 miles. We waited there since 11pm at night. Navy ship couldn't land on the Agumaw port due to big wave. They finally docked at 2:35 am and as soon as they docked, we scrutinized them. 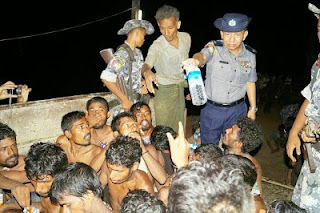 We bring 25 boat people par time to this Alae Than Kyaw village by cars and placed them at the school. While doing the resettling process, we provided temporary shelter, food and humanitarian assistance in cooperation with UNHCR from Maung Daw District, WFP, MSF and other NGOs organizations.

Our organization, population and immigration, what we do is, we asked them about where they are from and their country. As far as we asked over, there are 200 Bangladeshi people and 8 Bengalis.

Their stories so far are that the Bengali smugglers from Sittwe, come and pick the people at Kyauk Taw and leave those people for a while at RathaeTaung. Then, placed them on the trawler. And the trawler went back as soon as they pay the money.

As far as we observed, they'd been on the trawler since last two months ago. They have been treated noodle, stayed in the hatch and planned to send them to Malaysia. So far, we knew that the first trawler was already arrived to Malaysia.

Anchor Woman:  To arrange for the boat people, Myanmar Ministry of foreign affairs has to contact with Bangladesh's Border Affairs officers. There are 30 boat people aged 14 years old, and the others are over 18 or 19 years old. The State Chief Minister said humanitarian assistance are being provided to the migrant people regardless of any race and citizen.

Chief Minister, Rakhine State, Maung Maung Ohn : Mr. Ban Ki-moon called our President to save the drifted migrant people to nearest coast without discrimination of any citizens with humanitarian concept. The President also gave that direction to the subordinate personnel. 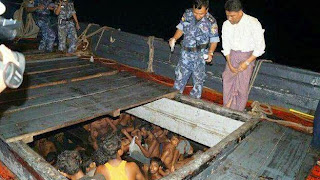 We think that this is the honourable task for Myanmar Government, Rakhine State Government and Rakhine nationals as they can save the lives of the migrant people stranded in the sea. We know that some of our citizens are misunderstanding about it. But this is the global issue and we are carrying out the task in cooperation with the United Nations. I’d like to urge all our citizens to understand it.

Boat people also said that they are really thanked to the Myanmar government for saving their lives. They want to go back home and want to meet with parents. We will help them as much as we can for the humanitarian assistance. We will carry out handing over process as soon as possible.

Anchor Woman: The officials from the UN Agencies expressed thank to the government and officials for giving quick assistance to the boat people and giving a chance to meet with them.

UN Special envoy Advisor: I think the action taken for saving the two boats here and the large number of people, the migrants, were have being saved shows Myanmar has actually to cooperate with the Myanmar authorities and we hope that similar action be taken in case that are further other boats and other people who are suffering.

I think the immediate question is to see that they are and then look after they are in the time here. ..... concerned country will identify and as a.... the national ... ... they will then take action to see how they can return to their home. 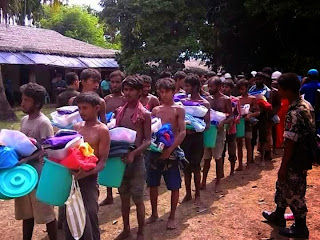 Resident Coordinator, Renata Dessallien: I would like to thank Myanmar government for rescuing these people and for treating them well once they got here on shore and looking after for their period of time until they return safely home.

Anchor Woman: The boat people also shared their experiences on the sea and answered the queries asked by officials of UN agencies and media persons.

Migrant: I am really thankful to the government of Myanmar. We have faced lots of difficulties in the sea. I want to go back to my own country and want to see my family and my mother. I wish to go back to Bangladesh.

Migrant: During the 50 days in the sea, I had lived on the boat and I haven't thought like I will reach to the land. Now I am survive and everything is new for me. I don't worry much, it will be stable very soon. After eating the rice and noodle, i feel newly fresh as I haven't had anything on boat. I was planned to go to Malay and wish to earn money for my mom and dad.

Migrant: I am really thanks to the government. I am from Bangladesh and I wish to go back to my country. My parents won't still know whether we are alive or not.

Anchor Woman: The Chief Minister and officials also presented relief items to the migrant people. 200 Bangladeshi people and 8 Bengalis from Kyauk Taw are being accommodated at the temporary relief camp in Alae Than Kyaw Village, and they will be handed over to their country as soon as possible.