(Ian Walker’s article direct from the DAILY TELEGRAPH on 14 May 2015.)

WOMEN were segregated and asked to sit at the back of a lecture by the radical group Hizb ut-Tahrir at a Muslim students group at the University of Western Sydney last night. At the event in UWS Parramatta Campus, men and women were asked to sit apart. The Daily Telegraph attended the talk — and this reporter sat with the women before being politely told “brothers to the front” and “sisters” to the back.

The women were ushered through a door marked “sisters” at the rear of the hall, while the “brothers” entered through another door and were told to take their place in “the front five rows”. Tahira Khan, 23, from Campbelltown, said the room was divided for cultural reasons. “I think it’s the respectful way because whenever we pray we pray separately,” Ms Khan said. “It’s a religious thing which happens at the Mosque and outside too.”


Shakila Sultana, 43, from Westmead, said it was so men could not see women. “Yes it’s normal because we always divide it so men can’t see you,” Mrs Sultana said. “That’s our Muslim culture. We always have divided ladies and men separate.” 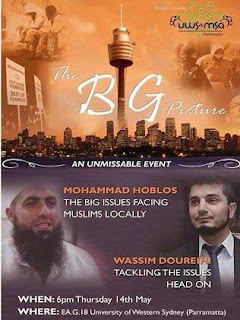 Muslim community elder Keysar Trad said it was not unusual at Islamic gatherings for men and women to sit apart. Muhammad Hoblos talks to the students but wouldn’t comment afterwards.

“A lot of religious gatherings separate men and women to prevent distraction and to make the women feel more comfortable,” he told The Daily Telegraph. “There are no rules, it’s traditional but it’s not uncommon. Some places they put them side by side, other places they put the men at the front for one reason only — so they can’t see the women.”

Keynote speakers from Hizb ut-Tahrir, Wassim Dourehi and Muhammad Hoblos, declined to answer questions from The Daily Telegraph. The segregation was explained as traditional, so the men couldn’t see the women. In his talk Mr Dourehi said social problems facing Muslims were the result of Western ideology.

“Next time we come across brothers or sisters battling addiction, who are constantly harassed by police, (who are) held up at the airport and sisters who are victims of domestic violence, understand the problems are systemic in nature,” Doureihi said. Wassim Dourehi was the vocal mouthpiece of the Australian branch of Hizb ut-Tahrir.

In a statement, UWS denied the event was split along gender lines. “The University’s Muslim Students’ Association (MSA) booked a venue on campus for an MSA event,” the statement said. “The event was not organised by Hizb ut-Tahrir. Wassim Doureihi addresses the UWS Muslim students' association meeting.

“Events such as these and others like them seek to build social cohesion in our community. UWS is a university located within the multicultural heart of Sydney. Our university reflects the diversity of our community.” The university said it was their understanding the audience was not directed to segregate. 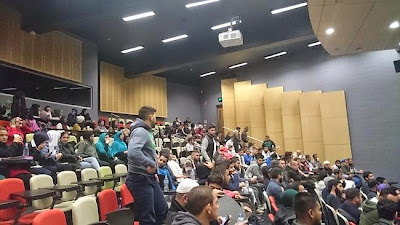 (Blogger’s Note: I’ve been told that some hardline Muslim students, both male and female Muslims, in UWS have been demanding segregation of sexes and even refusing to sit beside or near opposite sex in classrooms and lecture theaters. Has our lovely Sydney gone to the dogs?)
Posted by Hla Oo at 1:17 AM