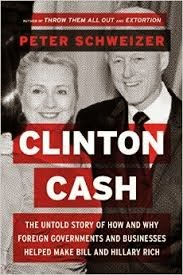 Hill and Bill can’t hide from shady deals exposed in ‘Clinton Cash’. The Clintons have been playing the political press for idiots.

Revealing what they’ve been up to took a little bit of work. It wasn’t obvious. While Bill Clinton was giving a speech about fighting AIDS in Africa, or about educating girls in Asia, reporters simply regurgitated the press release. They didn’t ask: Who’s that shady guy standing next to Bill? What are his interests? How much money has he given to, or raised for, Bill, Hillary and their foundation? And what favorable treatment did the shady guy subsequently receive from Hillary?

When you’re a political reporter, complexity is boring. Curiosity takes work. Asking questions and looking up information can lead to dead ends. It’s much easier to do gaffe patrol. Go to press conferences. Quote party hacks who call you every day with juicy little observations. Or, when all else fails, simply write down your opinions and call it “analysis” or attribute your thoughts to “critics.”

Thank goodness, then, for Peter Schweizer and his blockbuster expose “Clinton Cash: The Untold Story of How and Why Foreign Governments and Businesses Helped Make Bill and Hillary Rich.” (Very rich: The pair have made at least $136.5 million since 2001.)


The details of the Clinton operation vary, but the overall M.O. is fairly consistent, he writes.

One: Dodgy rich businessman, often a foreigner in the middle of a mega-deal in some corrupt country, possibly one run by a dictator, writes a check that buys him the status of friend of Bill Clinton (FOB). The check is payable to the Clinton Foundation or to Bill himself, as an honorarium for a meaningless idealistic speech that is essentially a homily at a whorehouse.

Two: When the cameras are turned off, Bill receives ultra-luxurious travel on someone else’s dime and attends a lavish party in his honor held by some dictator or shady businessman connected to the new FOB. Talks go on behind closed doors.

Three: Millions of dollars of donations start flowing into the Clinton Foundation from the FOB and associates.

Fourth: Potential roadblocks to the deal in the Senate or the State Department melt away. The business deal goes through. The new Clinton friend gets very, very rich.

Schweizer’s book does the painstaking work of following the money to such characters as Canadian mining tycoon Frank Giustra, who in a period of a few months gave $31.3 million to the Clinton Foundation. 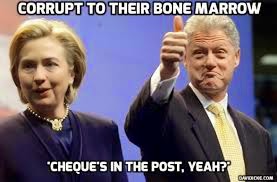 Giustra chauffeured Bill Clinton on his private jet to an improbable date with the dictator of Kazakhstan, whom Bill repeatedly praised and legitimized during an “election season” (the dictator received more than 90 percent of the vote).

Mukhtar Dzhakishev, the head of the Kazakhstan agency that oversees the country’s mining, said that Hillary Clinton pressured Kazakh officials to sell uranium assets to Giustra’s firm and that Bill Clinton adviser Tim Phillips said Hillary would not meet with him until Kazakh officials agreed to Giustra’s deal. Giustra’s firm, after a series of mergers, wound up controlling large amounts of uranium mining in the US and is now wholly owned by the Russian firm that built the Bushehr nuclear reactor in Iran.

Giustra’s business partner Ian Telfer directed some $2.35 million to the Clinton Foundation via his Fernwood Foundation. The Committee on Foreign Investment in the United States, a small group of high-ranking officials that included then-Secretary of State Clinton, approved the Russian takeover of US uranium mines.

Another FOB is mining tycoon Stephen Dattels, who in 2009 donated 2 million shares of stock in his company to the foundation. Two months later, the US ambassador to Bangladesh requested that the country reauthorize a mining permit that benefited Dattels’ company. The value of the stock Dattels had just given the foundation increased.

Dattels’ donation was never disclosed by the Clinton Foundation.

Laureate Education, a for-profit education firm, of which President Clinton is a paid “honorary chancellor,” has some unusual practices. For instance, its students serve as telemarketers who pitch the school to prospective new students. It operates in at least three countries (Turkey, Mexico and Chile) where for-profit universities are illegal, Schweizer notes.

An FOB, Douglas Becker, runs the for-profit university, which engages Bill Clinton to give speeches several times a year. Based on Clinton’s fee scale, that works out to Bill getting perhaps $1 million a year from Laureate, Schweizer estimates. (On disclosure forms, Bill revealed only that he has been paid “more than $1,000” by Laureate.)

Becker also runs a related nonprofit, International Youth Foundation, which coincidentally found its federal grant money has “exploded” (according to Schweizer) since Hillary became secretary of state (in 2009) and Bill became honorary chancellor of Becker’s profit-seeking company. Many of its grants came from the federal agency USAID, over which Hillary took control by “dramatically reducing” its independence, Schweizer says. 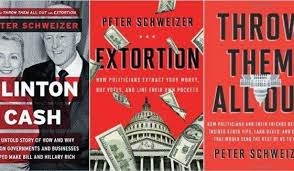 Given that the Clinton Foundation is a charity, though, does it really matter where the funding comes from? Let’s say Satan gives money to the foundation, which then spends the money combating malaria. Well, that’s a nifty bit of jiujitsu then. Satan has been tricked into doing the Lord’s work.
Then why is it illegal for American companies to do this, to donate money to politically connected overseas charities?

Schering-Plough, for instance, was charged with violating the Foreign Corrupt Practices Act when, in 2002, it gave money to a legitimate charity in Poland in order to curry favor with a Polish government official who was also on the board of the charity. The pharma company agreed to pay $500,000 to settle the claim. Hillary Clinton, by the way, is a hawk on the FCPA, “unequivocally opposed to weakening it,” as she once put it.

If Satan writes a check to the Clinton Foundation, it is not because Satan is too dumb to get something in return.

Moreover, as Sean Davis of The Federalist reported, for every $10 that the Clinton Foundation spends, only $1 is going out the door in the form of direct charitable grants. The rest goes to overhead — salaries, travel, office supplies, rent, IT expenses and “other” — a category that takes up more than a third of the budget.

Large donors are rewarded with titles, like a medieval monarch bestowing baronetcies: “Adviser to the Clinton Foundation” is a much-coveted title that many a donor proudly puts on his resume.

The foundation doesn’t pay the Clintons a salary. It doesn’t have to: It enables Bill to draw huge fees from outside groups to talk about the foundation. It is centrally a publicist for Bill and Hillary’s awesomeness. It also backs outside projects such as his 2007 book “Giving,” which earned him $6.3 million — returning publicity mojo to the foundation.

Many Clinton cronies work for the foundation, and thanks to a startling change of rules, some of them (such as Huma Abedin, Anthony Weiner’s wife and Hillary’s current chief of staff) were on the payroll of the foundation and Hillary’s State Department at the same time. Abedin was also allowed to remain a consultant for the corporate consulting firm Teneo, which represents huge firms such as UBS and Coca-Cola.

Clinton’s supporters argue that no quid pro quo has been proven.

We know that Bill and the foundation received huge amounts of money from foreign entities seeking political favors. We know that those entities got those favors from Hillary. But we don’t have a video of Bill or Hillary saying, “Give us this, and we will give you that.”

Disgraced Virginia Gov. Bob McDonnell and his wife are going to prison (both are free on appeal) for taking large gifts from donors seeking favors. No evidence exists that either McDonnell told the donors, “Give us this and we will give you that.”

Coca-Cola, which gave the foundation $5 million to $10 million, received help from State in lifting sanctions on Burma, where Coke just announced a $200 million investment.

Don’t all ex-presidents cash in? Yes, but none of them had a close family member who remained in high political office. (Jeb Bush’s term as Florida governor, by the way, ended before his brother left the White House.) 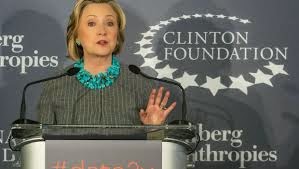 Mostly ex-presidents giving speeches trade on their glamour. That is a depreciating asset. Bill Clinton had something else to trade besides old stories: access to a family member who was secretary of state and perhaps a future president. That’s why his fees actually went up over time, not down. Eleven of the 13 highest-paid speeches he ever gave took place while his Hillary headed the State Department.

For instance, four days after The New York Times reported that Hillary would be President Obama’s nominee to be the next secretary of state, the Canadian company TD Bank suddenly began taking an interest in the man who had been president eight years earlier. They began hiring him to give a series of speeches for which they paid him $1.8 million. TD Bank happened to be the largest shareholder in another Canadian company, the Keystone XL pipeline that was seeking federal approval.

Hillary apparently lobbied for the pipeline behind the scenes: A Freedom of Information Act request uncovered State Department emails from her special assistant Nora Toiv advising Keystone’s lobbyist on how to win regulatory approval (which Obama has blocked).

The State Department issued an environmental impact statement that was essentially a green light for Keystone; Hillary publicly answered a question about approving the pipeline, “We are inclined to do so”; and Bill Clinton, at a green energy summit (!) in Maryland in 2012, told the crowd they should “embrace” Keystone. Asked about this remark, Hillary replied, “He’s a very smart man.”

Five months after TD Bank’s well-compensated new friend’s wife departed the State Department, with Obama increasingly intransigent about his opposition, TD Bank gave up and announced it would begin selling off its $1.6 billion worth of Keystone stock.

Should any of this surprise us?

The Clinton favor bank started doing business while President Clinton was still in the White House: A bankruptcy lawyer pledged $1 million to the Clinton Library in 1993 while he was being investigated by the Justice Department. The check was cashed, and three months later, the DOJ said “prosecution is not warranted.”

Anheuser-Busch gave the Clinton Library $1 million weeks after Clinton’s FTC dropped a plan to regulate any beer advertising that it determined to be aimed at minors. Marc and Denise Rich poured nearly $2 million into the library, Hillary’s Senate campaign and the Democratic Party before the president pardoned Rich, who had skipped bail and fled to Switzerland while facing trial for numerous financial crimes.

As revealing as it is, Schweizer’s book is necessarily incomplete. An outfit that is brazen enough to hide its emails from public scrutiny, then delete 30,000 of them, has many other safeguards to keep its favor-banking secret.


But virtually every chapter Schweizer wrote provides a tantalizing set of leads — curious characters to be interviewed, complex deals to be explored, connections to be untangled. “Clinton Cash” is the blueprint to a tower of important questions about the ex-president and the president in waiting. The press is eager to go back on gaffe patrol — this book shouldn’t let them.

Related posts at following links:
How Foreign Cash Made The Clintons Filthy Rich
Posted by Hla Oo at 8:46 PM