Obama The Muslim Is Refusing To Fight Islamic State 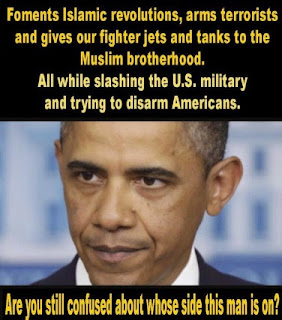 Why ISIS is beating Obama’s coalition! In September, President Obama announced a US-led “broad coalition” assembled to “degrade, and ultimately destroy,” the Islamic State (ISIS). Eight months later, the terrorists are stronger than ever.

This month, when the Islamic State launched a massive attack on the large Iraq provincial capital of Ramadi, the government in Baghdad did what it was supposed to do under Obama’s “strategic plan”: Iraqi Prime Minister Haider al-Abadi called for a meeting of the US-led coalition to coordinate action against ISIS. Very soon, however, it became clear that no such meeting would ever take place. The coalition, supposedly consisting of 50 nations, simply has ceased to exist, if it ever did exist.

According to Iraqi sources, al Abadi then lowered his expectations by meeting US Ambassador to Baghdad Stuart E. Jones to demand intensified airstrikes on ISIS units advancing on Ramadi. The ambassador managed to convince Washington to conduct a few strikes, but not enough to tip the balance. The terrorists advanced into the heart of the city as Iraqi security forces and many of the inhabitants simply fled.


Ramadi isn’t the first Iraqi city to fall since Obama unveiled his “coalition” last summer. The terror group has sustained some losses in Iraq, notably the city of Tikrit, Saddam Hussein’s hometown. It has also lost the hotly contested Kurdish city of Kobane in Syria. In both cases the so-called coalition was prominent by its absence.

In Tikrit, the bulk of the fighting was conducted by the Shiite militia known a Hashad al-Shaabai (Popular Mobilization) trained and armed by Iran. In Kobane, ISIS was driven out by Kurdish guerrillas led by PKK, a leftist Turkish Kurdish outfit.

Overall, however, since Obama announced his coalition, ISIS has expanded its territory by more than 20 percent, according to Iraqi estimates. In Syria, it annexed the province of Deir al-Zour and reached the desert oasis of Palmyra. In Iraq, it seized control of Haditha, Anah, Tarbil and Al-Qaim, and strengthened its hold on the important oil center at Baiji.

The Obama coalition was marked by confusion about its nature and purpose from the start. Over the past nine months, of the 50-plus members of the coalition, only four have joined the United States in conducting airstrikes. Now, however, even those four have airbrushed themselves out of the picture.

Some Arab members of the coalition try to justify their passive posture by pointing to fears that Obama is opening the way for Iranian domination of Iraq and, more broadly, the Middle East, in exchange for a nuclear deal with Tehran.

They cite the emergence of the Iraqi Shiite Popular Mobilization, modeled on the Iranian Baseej and the Lebanese Hezbollah, as evidence that Tehran is trying to create a state-within-a-state in Iraq as it has done in Lebanon, in Syria and tried to do in Yemen.

It’s hard to see why Obama would want to help Iran dominate the Middle East. But even if he does, Obama must know that such a scheme has little chance of success. In a region that has caught the sectarian fever as never before, it’s hard to see how Arabs, mostly Sunnis, would tolerate a Persian empire under the flag of Shiism.

In fact, ISIS is using the Iranian bogeyman as a powerful tool for recruiting Islamic militants from across the world. Official US estimates show that, since Obama announced his coalition, the flow of foreign jihadists to ISIS has intensified.

Iran’s Defense Minister Gen. Hussein Dehghan was in Baghdad this week for “coordination” with his Iraqi counterpart Khalid al-Ubaidi. Iraqi officials tell me off the record that they would have preferred to see the American secretary of defense instead.

“On paper, Americans are supposed to be our allies,” says an Iraqi leader. “But when it comes to the battlefield, we have to call in the Iranians, who have their own agenda and never joined the 50-plus coalition.”


Not only have we not “degraded” — let alone “destroyed” — ISIS, but the barbaric terrorist group claims to have instead degraded the supposed superpower. Sadly, the terrorists’ claim seems less of an exaggeration than our own.