Once again, a massive caravan of aliens is coming north to demand entry into the United States.  This one is even bigger than the last.  The number of migrants is over 7,000 and growing.

The open-borders Left and their talking heads in the media are falsely describing the caravan’s trek as a “humanitarian crisis.”  But that is nonsense. There is no war or drought in Central America that the migrants are fleeing.  They are simply coming to the United States en masse for economic reasons, hoping that their immense numbers swamp our immigration system or that they can otherwise find a way into the country.


The caravan is a perfect storm of problems that cause illegal immigration.  It illustrates the fecklessness of foreign governments like Honduras, Guatemala, and El Salvador that receive more than $500 million in foreign aid from the United States but can’t be bothered to lift a finger on America’s behalf when their own citizens threaten to invade our southern border.

It also illustrates the complete lack of respect for American sovereignty and American law by the illegal alien felons who have been deported multiple times and are now joining the ranks of the caravan.  For example, six-time deportee Anthony Fuentes is hoping to make his seventh entry into the United States with the caravan.

The caravan also illustrates the rampant abuse of our asylum laws, as I wrote with respect to the previous alien caravan in the Spring of 2018.  When an otherwise-illegal alien comes to the United States, he can claim political asylum when he gets here.  To obtain asylum, an alien must demonstrate a “well-founded fear of persecution” in his country of origin, based on membership in a particular social, religious, political or racial group. 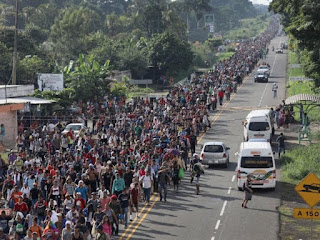 However, it appears that many aliens in the caravan will be claiming asylum simply based on the fact that they lived in poverty or in crime-ridden areas.  But those are not valid bases for seeking asylum.  Compounding the problem is the fact that the majority of asylum claimants are allowed to roam the United States for years while their asylum claims are being adjudicated.

When so many aliens claim asylum at once, it becomes impossible to process all of the claims quickly or to detain them all in the meantime.  The asylum applicants are also able to obtain employment authorization while their claims are pending.  Others disappear into the fabric of the country and fail to show up for their asylum hearings.  Indeed it appears that many of the aliens in the first alien caravan of 2018 are doing exactly that.

It is a stark contrast to the typical illegal immigration we have seen for decades – namely small groups of aliens sneaking across the border in the dead of night.  Now we have thousands of aliens marching to our southern border, in full daylight with the media in tow, demanding that they be admitted to the United States.  Meanwhile the American Left cheers them on.

But we shouldn’t be surprised.  For years, our country has rewarded illegal immigration with a permissive asylum system, lax interior enforcement, hundreds of sanctuary cities and counties, and generous welfare benefits in many states (including my own state of Kansas).  In total, the federal and state governments are giving illegal aliens more than $134 billion in taxpayer-provided benefits per year.  And the open-borders Left wants even more.

(Kris W. Kobach is the elected Secretary of State of Kansas.  An expert in immigration law and policy, he coauthored the Arizona SB-1070 immigration law and represented in federal court the 10 ICE agents who sued to stop Obama’s 2012 DACA executive amnesty.  He is currently a candidate for governor in Kansas.  His website is kriskobach.com.) 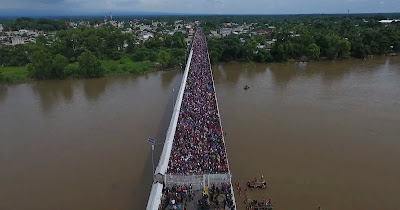 INVADING THE US; HOW IT STARTED

The invasion force is now 14,000: Edith Cruz was sitting at home in central Honduras, scanning Facebook on her phone, when she saw the post about the caravan on a community news page.

It was Oct. 12. She and her cousin had just opened a small business selling tortillas when they were confronted by a gang, threatened with death if they didn't hand over half of their profits. She looked at the Facebook post: "An avalanche of Hondurans is preparing to leave in a caravan to the United States. Share this!" Within three hours, her bags were packed...

Although the caravan's origin story remains somewhat opaque, the answer from many migrants here is that they had wanted to leave for months or years, and then - in a Facebook post, a television program, a WhatsApp group - they saw an image of the growing group and decided...

On Tuesday, they stopped to rest in the small southern Mexican city of Huixtla, washing their clothes in buckets of water, sending messages to their families from Internet cafes, accepting whatever donations local residents were willing to offer. There was word that hundreds more migrants from across Central America, drawn by the endless media coverage, were on their way.

The Honduran government claims that community activists, led by a former legislator named Bartolo Fuentes, were initially behind the group, intending to malign the country's leaders. The bulk of the migrants here are still from Honduras. 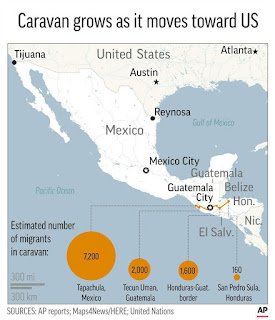 "There's clear evidence where it began. Bartolo was the person who was in front of the media; he was the face of this event," Alden Rivera Montes, Honduras' ambassador to Mexico, said in an interview. They were trying to show Honduras as a failed country, which is totally false," Rivera Montes said...

Fuentes told The Post he was merely helping to connect small groups of would-be migrants who were already planning to travel north. In September, there were posts on Honduran Facebook groups about the plans for the caravan...

He said he was in touch with four groups of would-be migrants who were talking on WhatsApp and other social networks - in Tegucigalpa, the capital, as well as La Ceiba, Colon and San Pedro Sula - about the possibility of traveling together...

Fuentes had a long career as a political activist on the Honduran left. A former student leader who had protested against the U.S.-backed "contra" war to overthrow the neighboring Nicaraguan government, he was elected to the legislature in 2013 and hosted a radio show about migration called "Without Borders." He is a staunch critic of President Juan Orlando Hernández.

A week before the caravan started, Fuentes posted on his Facebook page a flier about the caravan that read, "We aren't going because we want to, violence and poverty is driving us out." It called people to meet at 8 a.m. on Oct. 12 at the San Pedro Sula bus terminal...

The early days of the caravan received a surge of media coverage in Honduras, particularly from HCH, a popular television broadcaster in the country. By the time people started gathering at the bus terminal on Oct. 11 and 12, there were live streams on various Facebook pages. Before Americans had heard about it, the caravan had gone viral in Central America.