How Champions Of The Poor Become Socialist Tyrants

(Hal Snarr’s article from The MISES INSTITUTE AUSTRIA on 28 September 2018.)

In a free society, income and wealth gaps are driven by variations in skill, knowledge, talents, independence, creativity, drive, and willingness to take risks. People who are satisfied with safe and secure occupations — like economics professor, school teacher, nurse, dentist or tax return preparer — expect to have much less wealth and income than risk-taking individuals who successfully capitalize on splendid ideas that result in products and services that benefit all of society.

In this system, quantity, quality, and prices are determined by the demand and supply of goods and services.

The diagram below depicts one of many markets. The good or service being exchanged could be homes, X-rays, bank reserves, hours of low-skilled labor needed, tickets to Solo: A Star Wars Story, or, in this case, smartphones. 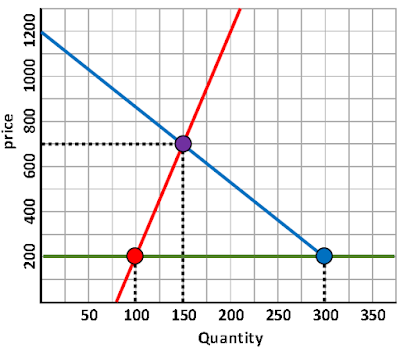 Demand (the blue line) and supply (the red line) meet at the purple point. Assuming a free market system of no taxes, subsidies, price controls, regulations, prohibitions, government ownership, etc., 150 smartphones are produced and sold to 150 consumers at a price of $700.

The Economics of Government-Created Shortages

History is littered with examples of tyrants who start out as champions of the poor. Their political ascents begin with the pitting of the poor against the rich by using income and wealth gaps.

They make claims that moguls and magnates have gotten rich because they charge unnecessarily high prices in an unfair market system that prices out the poor. In the figure above, for example, 150 consumers have smartphones, 150 do not. Champions of the poor can use such observation to win elections.

The red supply line determines the level of output that maximizes producer profit at various prices. Prior to the enactment of the price ceiling, profit is maximized when 150 smartphones are produced and sold for $700 each (the purple point).

After the $200 price ceiling is set, profit is maximized (or loss is minimized) if 100 smartphones are produced (the red point). If this generates zero economic profits for producers, any other level of production at this price (or along the green line) yields economic losses for producers.

Make More Products Available at Lower Prices — Or Else!

The price ceiling has several unintended consequences. It creates a shortage of smartphones because consumers want to buy more smartphones than producers make. Since wealthy consumers are willing to pay a much higher price than the price ceiling, only the 100 wealthiest consumers can buy smartphones in the legitimate market using bribes or in the illegal black market.

The prison population rises as bribes and black market commerce turn sellers and buyers into criminals. The middle class, the 50 consumers who could buy smartphones at the previous market price but cannot at the price ceiling, disappears as they become have-nots. The poorest 150 people, those unable to buy smartphones before the policy was enacted, are unable to buy them after the price ceiling is set.

With the policy swelling the ranks of the poor, there is growing pressure on their charismatic champion to fix the unintended consequences of his or her interventions. He or she needs to nudge or force producers to make enough smartphones for everyone at the artificially low price.

Producers resist because that outcome (the blue point) generates economic losses. The charismatic champion of the poor implements additional interventions. He or she can subsidize these losses or nationalize the producers. In either scenario, the economic losses of a government-owned enterprise or a subsidized private producer must be papered over with taxation or inflation.

Whether the losses are subsidized with confiscated money from taxation or newly printed money from inflation, bad and profitable decisions are equally rewarded. This results in less innovation and entrepreneurship, a more rapid depreciation of techniques and equipment, and accelerating economic losses.

To do this, the money supply is increased, which occurs when the champion of the poor directs the nation’s central bank to print new money to buy new Treasury bonds. With each period’s economic losses being pyramided on top of previous periods’, the money supply expands at a geometric pace. This causes the nation’s currency to devalue at an increasing rate.

The moguls and magnates that own commercial, rental, and personal property benefit from the inflation. As the rents they collect grow geometrically in inflation, the real value of their loan principle falls. In a few periods of sufficiently high inflation, inflated rents can be used to pay off loan principle or the equity inflation creates can be leveraged to acquire more property. They can also protect their wealth by purchasing safer currencies or precious metals, the poor cannot.

The policies that are intended to help the poor — rent control, price ceilings, and the minimum wage — harms the poor, destroys the middle class, widens wealth and income gaps, extinguishes innovation and entrepreneurship, and turns champions of the poor into tyrants.

Related posts at following links:
1,000,000% Hyper-Inflation In Venezuela's Socialist Hell
Posted by Hla Oo at 4:16 AM