Why Saudis Had To Cut Up Khashoggi’s Body

(Nancy Koblin’s article from The CLARION PROJECT on 24 October2018.) 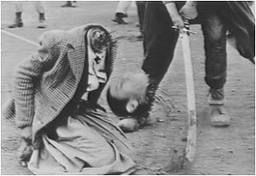 The cut-up remains of Saudi journalist Jamal Khashoggi’s body were found in the garden of the Saudi consul general’s home in Istanbul, about 500 meters from the consulate where the Saudis have now admitted he was murdered, according to a number of sources.

While conflicting narratives of the murder swirled around the media leading up to discovery of his body parts, a couple of important questions must answered: Why did the issue of dismemberment become so pronounced in the battle of the narrative? What is its psychological meaning?

One of the first narratives, floated by the Turks, claimed that Khashoggi was murdered within two minutes of setting foot in the Saudi consulate in Istanbul. The Turks claimed Khashoggi was tortured, dismembered and beheaded by a hit team of 15 which included Dr. Salah Muhammed al-Tubaigy, Saudi Arabia’s leading forensic specialist, who brought along a bone saw and is said to have requested music to listen to while dismantling the body.


As Clarion Project pointed out, this gory narrative immediately put a strain on the kingdom’s diplomatic relations with the U.S. Gruesome, brazen and barbaric were some of the terms that were thrown around in response to learning his fingers were cut off first, then his head and finally his body was chopped into small pieces in order to “disappear” it from the crime scene.

Images of such a sadistic act were the linchpin in inciting the political debacle. Yet, since the remains of Khashoggi’s body had not been found yet, it also served to precipitate a war over who controlled the narrative. With this “memory” destroyed, who owned the truth?

The story had a mesmerizing global grip. The dismemberment narrative galvanized the media and international politics to shift its focus to Crown Prince Mohammed bin Salman (MBS), whose nickname was already Abu Rasasa (father of the bullet), a reference to the time MBS, as a teenager, he sent a Saudi land registry official a single bullet in the mail when the official refused to help him appropriate a property.

As leader of a royal mafia whose flag sports the Saudi sword — the beheading tool of dismemberment — will MBS’ nickname now be changed to “father of the bone saw?” It has been suggested that if MBS simply wanted Khashoggi dead, he could have hired the Chechen mafia. Yet, he chose dismemberment. Such blood-letting is the essence of a shame/honor culture, and MBS was repeated shamed by Khashoggi.

What does dismemberment mean psychologically?

How does it communicate unconsciously? Its sadistic lure is found in the forensics of serial killing where crime scenes are often predicated on dismemberment. In my book, The Banality of Suicide Terrorism I underscore journalism’s obsession with reporting about the body parts at the crime scene of Islamist suicide attacks.

Such crime scenes encompass the murderer’s rage, a rage that exceeds murder itself. It’s not enough for the serial killer or the Islamist terrorist or MBS to murder, it must be a murder which dismantles the body into nothingness.

In serial killing, body parts are an unconscious psychic representation of the mother’s body in pieces. It is the killer’s perverse adaptation to his psychotic world. When a baby is born, he does not have an integrated picture of the mother being separate from himself. Instead, the baby knows the mother’s body part by part – breast, lips, skin, eyes, etc.

Serial killers and Islamist terrorists share this infantilized thinking. The same holds true for Muslim shame/honor cultures in which men are infantilized and women are repeatedly targeted to be destroyed, mentally and physically. (In evolutionary stages the barbaric Muslims are still at the wild animals’ stage psychologically.)

The underside of dismemberment is the effacement of the mother. Abdelwahhab Bouhdiba wrote about the necessary destruction of the mother for a Muslim man to free himself from maternal smothering in Sexuality in Islam.

The obsessive/addictive practice of dismemberment runs so deep in Saudi culture that reforms like opening cinemas and “letting” women drive serve as mere band aids for a culture devoid of empathy and critical thinking, a culture floundering to modernize. Some may argue the Saudis do have empathy, but it is a narcissistic empathy at best and only for their own, not for the other.

The gruesome, brutal and barbaric slaughter of a human being is a profound psychological attack on all of us. This is how terrorism works. The act constitutes “dis-memorying,” wiping out the memory of what it means to be human in order to terrify, paralyze and force the other into submission. Such thinking can be found in the Saudi consulate crime scene. The sadism of the act of dismemberment seduced the terrified public.

In the end, this murder does not bode well for Saudi Arabia. It exposed the horrific mentality of one of the Western World’s primary trade, political and military powers. A first step in making amends would be for MBS to redesign his country’s national flag and remove the sword, the tool of dismemberment. 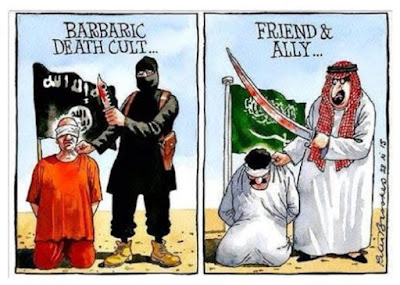 Related posts at following links:
Khashoggi Was Still Alive When Saudis Started Cutting him Up.
Posted by Hla Oo at 11:21 PM