Khashoggi Was Still Alive As Saudis Started Cutting Him

(David Hearst’s article from The MIDDLE EAST EYE on 16 October2018.)

Turkish source tells MEE that journalist was killed and dismembered in a study room at the Saudi consulate in Istanbul. It took seven minutes for Jamal Khashoggi to die, a Turkish source who has listened in full to an audio recording of the Saudi journalist's last moments told Middle East Eye.

Khashoggi was dragged from the Consul General’s office at the Saudi consulate in Istanbul and onto the table of his study next door, the Turkish source said. Horrendous screams were then heard by a witness downstairs, the source said.


"The consul himself was taken out of the room. There was no attempt to interrogate him. They had come to kill him,” the source told MEE. The screaming stopped when Khashoggi - who was last seen entering the Saudi consulate on 2 October - was injected with an as yet unknown substance.

Salah Muhammad al-Tubaigy, who has been identified as the head of forensic evidence in the Saudi general security department, was one of the 15-member squad who arrived in Ankara earlier that day on a private jet.

Tubaigy began to cut Khashoggi’s body up on a table in the study while he was still alive, the Turkish source said. The killing took seven minutes, the source said. As he started to dismember the body, Tubaigy put on earphones and listened to music. He advised other members of the squad to do the same. “When I do this job, I listen to music. You should do [that] too,” Tubaigy was recorded as saying, the source told MEE.

A three-minute version of the audio tape has been given to Turkish newspaper Sabah, but they have yet to release it. A Turkish source told the New York Times that Tubaigy was equipped with a bone saw. He is listed as the president of the Saudi Fellowship of Forensic Pathology and a member of the Saudi Association for Forensic Pathology.

In 2014, London-based Saudi newspaper Asharaq al-Awsat interviewed Tubaigy about a mobile clinic that allows coroners to perform autopsies in seven minutes to determine the cause of death of Hajj pilgrims.

The newspaper reported that the mobile clinic was partly designed by Tubaigy and could be used in "security cases that requires pathologist intervention to perform an autopsy or examine a body at the place of a crime”.

These are the first details to emerge of the Saudi journalist’s killing. Khashoggi was last seen entering the Saudi consulate in Istanbul on 2 October to retrieve paperwork. To date, Saudi officials have strongly denied any involvement in his disappearance and say that he left the consulate soon after arriving. However, they have not presented any evidence to corroborate their claim and say that video cameras at the consulate were not recording at the time.

On Tuesday, both Donald Trump and Mike Pompeo, the US Secretary of State, came out in support of Saudi officials' denials they know anything about what happened to Khashoggi. Trump tweeted that he spoke to Saudi Crown Prince Mohammed bin Salman, who "totally denied any knowledge of what took place" in Istanbul. Trump said MBS told him "that he has already started, and will rapidly expand, a full and complete investigation into this matter".

On Monday, CNN reported that Saudi Arabia was preparing to release a report that would blame Khashoggi's death on a botched interrogation. That would be a sharp reversal of earlier statements in which Saudi officials said they had nothing to do with the journalist's disappearance and said he left the Saudi consulate minutes after he first arrived on 2 October.

Khashoggi, a prominent journalist and columnist for the Washington Post, had been living in self-imposed exile in Washington, DC, when he disappeared. On Tuesday, Washington Post publisher and CEO Fred Ryan called for a "full and honest explanation" of Khashoggi's disappearance.

The United Nations human rights chief also called for immunity to be lifted for officials who might be involved in Khashoggi's disappearance. Due to the seriousness of the case, the immunity generally accorded to diplomats "should be waived immediately", Michelle Bachelet said.

Turkish government claims it has audio and video Of Killing

The Turkish government has told US officials that it has audio and video recordings that prove Washington Post columnist Jamal Khashoggi was killed inside the Saudi consulate in Istanbul this month, according to US and Turkish officials.

The recordings show that a Saudi security team detained Mr Khashoggi in the consulate after he walked in on 2 October to obtain an official document before his upcoming wedding, then killed him and dismembered his body, the officials said.

The audio recording in particular provides some of the most persuasive and gruesome evidence that the Saudi team is responsible for Mr Khashoggi's death, the officials said.

"The voice recording from inside the embassy lays out what happened to Jamal after he entered," said one person with knowledge of the recording who, like others, spoke on the condition of anonymity to discuss highly sensitive intelligence.

"You can hear his voice and the voices of men speaking Arabic," this person said. "You can hear how he was interrogated, tortured and then murdered." A second person briefed on the recording said men could be heard beating Mr Khashoggi.

The journalist has had long-standing ties to the Saudi royal family, but has written critically of the current government and Saudi Crown Prince Mohammed bin Salman.

The existence of such evidence would explain why Turkish officials were quick to blame Saudi Arabia for Mr Khashoggi's killing. But Turkish officials are wary of releasing the recordings, fearing they could divulge how the Turks spy on foreign entities in their country, the officials said.

It's not clear that US officials have seen the footage or listened to the audio, but Turkish officials have described their contents to their American counterparts. Saudi officials have denied any involvement in the disappearance of Mr Khashoggi, saying he left the consulate shortly after entering. Turkey said on Thursday it has agreed to a request by Saudi Arabia to form a joint committee to probe what happened to Mr Khashoggi.

Prince Mohammed has billed himself as a reformer and moderating force in the country, and he has become a key strategic partner in particular to Jared Kushner, the president's son-in-law and senior adviser.

Mr Kushner has tried to promote Mohammed to sceptical national security officials, who have long viewed him as an impetuous and ruthless leader who has an overly simplistic view of the complex challenges the United States faces in the Middle East. 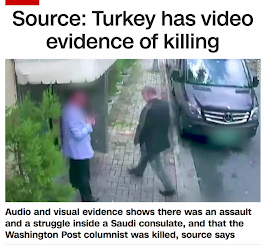 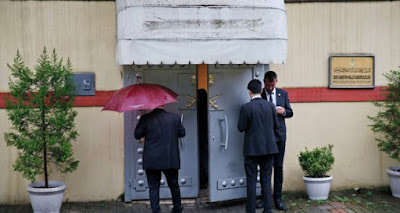 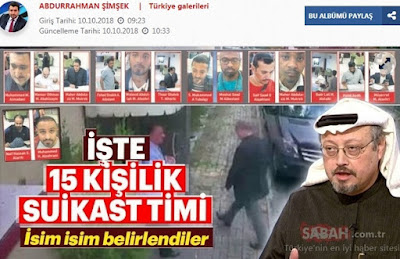