(Staff articles from The CLARION PROJECT on 03 October 2018.)

On Tuesday, October 2nd, 2018, the San-Francisco based Zaytuna college co-founder wrote a 1,300 word public Facebook post on his view of the Kavanaugh story. Nominee Kavanaugh participated in a public hearing last week alongside Dr. Christine Blasey Ford, a psychologist, who has accused Kavanaugh of sexually assaulting her at a party over 30 years ago.

Over the last week, the Kavanaugh story has dominated the headlines and caught the attention and opinion of most Americans, including those who typically shy away from public opinion over hot button issues. In his Facebook post, Shakir cited sharia law rooted in Quranic scripture:

I do not support the appointment of Judge Brett Kavanaugh to the Supreme Court of the United States. My position, however, is based neither on the accusations nor the testimony of Dr. Christine Blasey Ford. I believe that Judge Kavanaugh perjured himself in the Judge William Pryor situation, and that he has proven to be too politically partisan to sit on the Supreme Court.

As for Dr. Ford’s accusations, they cannot be used as evidence against Judge Kavanaugh. That is so for a number of reasons. I will confine myself to those which are rooted in Muslim teachings. We read in the Qur’an, “Those who bring charges of sexual improprieties against chaste women, then fail to come forth with four corroborating witnesses, lash them eighty times and never again accept their testimony. Such are truly corrupt” 24:4.

This verse raises several important points of discussion. First of all, Islam does have a high standard to establish proof of sexual impropriety, however, that standard, as clear from this verse, is immediately set to protect the honor of women. It is extended to include that of a man. 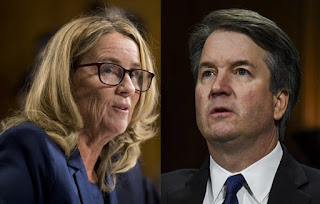 Secondly, some may argue that the accusation intended in this verse is that of fornication and that Dr. Ford is not accusing Judge Kavanaugh of fornication. This is true, however, an air of extreme caution should be maintained in slanderous cases involving sexual improprieties less grave than fornication or actual rape. This is affirmed by the verses immediately following the one in question.

These verses involve those who started a campaign to impugn Aisha (God be pleased with her) suggesting she had been romantically involved with a young man who honorably escorted her out of the desert after she had become separated from the Prophet’s caravan (peace and blessings upon him) after the Battle of Bani al-Mustaliq.

The gravity of becoming involved in such slanderous campaigns is made clear in those verses, which are referred to as the verses of “Ifk.” We read:

“Those producing a slanderous imputation are a clique among you. Do not think [O believers] that it is bad for you; rather, it is good for you. Everyone (involved in spreading this calumny) is liable for the sin they themselves have earned, while the principal instigator will have a grave punishment. Why is it that when the believing men and women heard it they did not think well of each other and say, ‘This is an obvious lie!’ ‘Why did these accusers not bring forth four corroborating witnesses?’

In that they have not brought forth witnesses they are liars in the sight of God. Were it not for the Grace of God and His Mercy in this world and the next you would have been afflicted with a great punishment for what you involved yourself in. You unleashed your tongues in [spreading such imputations] and spoke with your mouths what you had no knowledge of. You took [such scandal-mongering lightly] while it is extremely grave with God. When you did hear it, why did you not say, ‘We have no right to speak in this matter, gloried are you O God! It is pure slander.’ God admonishes you that you never again engage in such an affair if indeed you are believers.” (24:11-17)

These standards of truth constitute essential teachings in our religion designed to help insure that our societies remain sane and governable. The honor these verses are designed to protect is real, as are the condemnations they issue, as well as the punishments they threaten. If anyone can randomly produce vile accusations against anyone they please, and the only standard of assessing the veracity of those accusations is our subjective feeling concerning the credibility of the accuser or the accused, none of us would be safe against the impugnment of his or her honor. 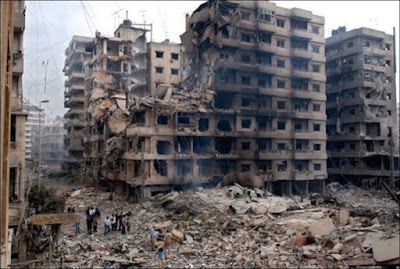 The comment was made in an undated lecture posted on YouTube titled, "Jihad: A Just Struggle or Unjust Violence?" It is not known when the lecture was given but clips from it first appeared in 2009.

Shakir defined terrorism as “random violence directed against a civilian population to affect a political outcome.” He cited the Israeli bombing of Beirut in 1982 as acts of terrorism and Hezbollah’s bombing of the Marine barracks as a military operation.

“Hezbollah’s bombing of the Marine barracks in 1984 is viewed as one of the greatest acts of terrorism directed against Americans until the Oklahoma City [bombing] in history, but if we step back, who was targeted? Civilians? No, military personnel in a military installation in a war zone,” Shakir is seen saying at about 17 minutes into the video.

“It’s interesting go ask a question, if Hezbollah owned a bomber, which they don’t, and flew overhead and bombed the barracks, would it be described as an act of terrorism?” he asks. Shakir said that jihad can mean a general struggle to do something good for Islam or a just war to protect Muslims.

Jihad does not justify a “perpetual revolution” of a violent nature, he explains. Jihad can be carried out when Muslims are oppressed or people, Muslim or non-Muslim, are too weak to defend themselves from oppressors.

Shakir says that “Muslims are the most terrorized people on earth,” giving Palestine, Bosnia, Kosovo, Chechnya, Kashmir and the Philippines as examples, implying that jihad is approved in these areas.
Islam does not condone the killing of non-combatants and attacks inside the U.S. are not permissible because Muslims have been given a “covenant of protection,” according to Shakir.

In his view, Muslims are sometimes treated unfairly, like the “Blind Sheikh” who is in prison for his role in the 1993 World Trade Center bombing, but these cases are the exception, notthe rule. Until this treatment becomes the rule, Muslims are to advance Islam through preaching the faith.

He criticizes the belief that all non-Muslims are enemies, blaming it on the influence on non-Islamic ideologies like Marxism. Shakir teaches that terrorism is a method used by those who are too weak to fight their adversaries through other means, making them sound like misguided freedom fighters who feel like they have no other options.

On September 28, 2012, Zaytuna College posted video of a lecture by Shakir and his two Zaytuna co-founders, Hamza Yusuf and Hatem Bazian, the latter of which is the chairman of American Muslims for Palestine. Shakir opened up his remarks by expressing his condolences for the family of U.S. Ambassador Christopher Stevens, who was killed by Al-Qaeda in Libya. He immediately followed that by expressing his sorrow for the families of eight women who, in his words, were “brutally murdered by NATO bombs in Afghanistan.”

Bazian spoke before Shakir and claimed that the “military-industrial complex” is behind the “Islamophobic production industry.”

“Those who are working on Islamophobia, they believe that the more hatred we have of Muslims in here, the more that we have reflexive hatred of Muslims abroad, thus authorizing or making the need for military action and the death and destruction more palatable to us without having to think we are actually killing humans,” Shakir’s colleague said.

Hamza Yusuf, who spoke third and is another Zaytuna co-founder, argued in favor of laws prohibiting speech that “mocks” religion. "I want to argue that when the First Amendment, which is such a beautiful testimony to the ideals of this country, was enacted, there were dueling laws in the United States of America and the dueling laws were actually a caveat to make sure you didn’t use freedom of speech to abuse other people," Yusuf said.

He reiterated this belief during the question-and-answer session afterwards, citing incidents where artwork mocking Christianity were banned in the United Kingdom and Sweden and said anti-Muslim speech is a “present and imminent danger.”

Shakir’s website says he is “amongst the most respected and influential Islamic scholars in the West.” There is a quote on Zaytuna College’s website from Dr. Omid Safi of the University of North Carolina where he calls it “far and away the single most influential institution that’s shaping American Muslim thought.”