Trump: We Will Hold All Asylum Seekers in Tent Cities Until Their Trial. During an interview broadcast on Monday’s edition of the Fox News Channel’s “Ingraham Angle,” President Trump stated that asylum applicants will be held in tent cities until their hearing takes place, and people with rejected asylum applications will “get out.”

There are two paths to asylum in the United States:

First Path To Asylum: In "affirmative asylum" cases, an individual is in the U.S. or has arrived at a point of entry and has declared his or her application for asylum to the U.S. Citizenship and Immigration Services within one year of their arrival in country. A decision can be made by a USCIS asylum officer.

Second Path To Asylum: In “defensive asylum” cases, an individual has requested asylum as a form of relief or defense against forcible removal from the U.S. before an immigration judge. The individual may have been undocumented or in violation of his or her status when apprehended in the U.S. or were caught trying to enter the U.S. without proper documentation and found to have a credible fear of persecution or torture.

WASHINGTON – President Trump said Monday that he wants to construct “tent cities” to house migrants while they wait in the United States to see if they’ve been granted asylum.

“And they’re going to wait and if they don’t get asylum, they get out. And very few people – they don’t actually – if you want to wait, they don’t usually get asylum, you know that,” Trump said.

Trump – and others within his administration – has voiced concern that asylum seekers are abusing the system. He suggested migrants would apply for asylum and then disappear into the country, never to be heard from again.

“The problem is – they release them in and then they have the trial three years later and nobody shows up,” Trump told Ingraham Monday. “But … unlike Obama and unlike others, we are going to take the people, we’re going to put them in and they’re going to wait.”

Last week on a call with reporters, a senior administration official – who the White House wouldn’t allow to be named – unleashed a tirade against the asylum system, suggesting migrants were being trained by “NGOs and radical left wing organizations” to make “preposterous utterances that cannot possibly be taken as true.”

Credible asylum cases, the official said, were “buried like needles in a haystack” because of the 700,000-plus case backlog. “There’s no question that with the NGOs and what these left-wing groups are doing is an attempt to crash and overwhelm the system with fake and phony claims,” the official said.

Around 80 percent of asylum-seekers pass their first interview with a US Citizenship and Immigration Services Asylum officer. But far fewer are granted asylum. In 2017, about 20 percent of asylum requests were granted. Another 34 percent were denied.


In shelters from Kansas to New York, hundreds of migrant children have been roused in the middle of the night in recent weeks and loaded onto buses with backpacks and snacks for a cross-country journey to their new home: a barren tent city on a sprawling patch of desert in West Texas.

Until now, most undocumented children being held by federal immigration authorities had been housed in private foster homes or shelters, sleeping two or three to a room. They received formal schooling and regular visits with legal representatives assigned to their immigration cases.

But in the rows of sand-colored tents in Tornillo, Tex., children in groups of 20, separated by gender, sleep lined up in bunks. There is no school: The children are given workbooks that they have no obligation to complete. Access to legal services is limited.

These midnight voyages are playing out across the country, as the federal government struggles to find room for more than 13,000 detained migrant children — the largest population ever — whose numbers have increased more than fivefold since last year.

The average length of time that migrant children spend in custody has nearly doubled over the same period, from 34 days to 59, according to the Department of Health and Human Services, which oversees their care.

To deal with the surging shelter populations, which have hovered near 90 percent of capacity since May, a mass reshuffling is underway and shows no signs of slowing. Hundreds of children are being shipped from shelters to West Texas each week, totaling more than 1,600 so far.

The camp in Tornillo operates like a small, pop-up city, about 35 miles southeast of El Paso on the Mexico border, complete with portable toilets. Air-conditioned tents that vary in size are used for housing, recreation and medical care. Originally opened in June for 30 days with a capacity of 400, it expanded in September to be able to house 3,800, and is now expected to remain open at least through the end of the year.

“It is common to use influx shelters as done on military bases in the past, and the intent is to use these temporary facilities only as long as needed,” said Evelyn Stauffer, a spokeswoman for the Health and Human Services Department. Ms. Stauffer said the need for the tent city reflected serious problems in the immigration system.

“The number of families and unaccompanied alien children apprehended are a symptom of the larger problem, namely a broken immigration system,” Ms. Stauffer said. “Their ages and the hazardous journey they take make unaccompanied alien children vulnerable to human trafficking, exploitation and abuse. That is why H.H.S. joins the president in calling on Congress to reform this broken system.”

But the mass transfers are raising alarm among immigrant advocates, who were already concerned about the lengthy periods of time migrant children are spending in federal custody. The roughly 100 shelters that have, until now, been the main location for housing detained migrant children are licensed and monitored by state child welfare authorities, who impose requirements on safety and education as well as staff hiring and training.

The tent city in Tornillo, on the other hand, is unregulated, except for guidelines created by the Department of Health and Human Services. For example, schooling is not required there, as it is in regular migrant children shelters.

Mark Greenberg, who oversaw the care of migrant children under President Barack Obama, helped to craft the emergency shelter guidelines. He said the agency tried “to the greatest extent possible” to ensure that conditions in facilities like the one at Tornillo would mirror those in regular shelters, “but there are some ways in which that’s difficult or impossible to do.”

Several shelter workers, who spoke on condition of anonymity for fear of being fired, described what they said has become standard practice for moving the children: In order to avoid escape attempts, the moves are carried out late at night because children will be less likely to try to run away. For the same reason, children are generally given little advance warning that they will be moved.

At one shelter in the Midwest whose occupants were among those recently transferred to Tornillo, about two dozen children were given just a few hours’ notice last week before they were loaded onto buses — any longer than that, according to one of the shelter workers, and the children may have panicked or tried to flee.

The children wore belts etched in pen with phone numbers for their emergency contacts. One young boy asked the shelter worker if he would be taken care of in Texas. The shelter worker replied that he would, and told him that by moving, he was making space for other children like him who were stuck at the border and needed a place to live

Some staff members cried when they learned of the move, the shelter worker said, fearing what was in store for the children who had been in their care. Others tried to protest. But managers explained that tough choices had to be made to deal with the overflowing population.

The system for sheltering migrant children came under strain this summer, when the already large numbers were boosted by more than 2,500 young border crossers who were separated from their parents under the Trump administration’s zero-tolerance policy. But those children were only a fraction of the total number who are currently detained. Most of the detained children crossed the border alone, without their parents. Some crossed illegally; others are seeking asylum.

Children who are deemed “unaccompanied minors,” either because they were separated from their parents or crossed the border alone, are held in federal custody until they can be matched with sponsors, usually relatives or family friends, who agree to house them while their immigration cases play out in the courts.

The move to Texas is meant to be temporary. Rather than send new arrivals there, the government is sending children who are likely to be released sooner, and will spend less time there — mainly older children, ages 13 to 17, who are considered close to being placed with sponsors. Still, because sponsorship placements are often protracted, immigrant advocates said there was a possibility that many of the children could be living in the tent city for months. 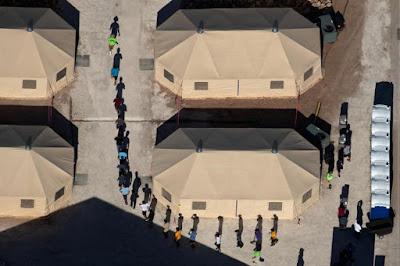