Leftist US Open Borders Activists Behind The Caravan

(Haley Kennington’s article from The BIG LEAGUE POLITICS on 27 October 2018.)

A group of 7,000 plus immigrants from Central America has been making its way through Mexico towards the United States border, with clear intentions: enter the U.S., even if that means violating American immigration laws.

The (Left-Wing-Fake-News) New York Times has said that “no group has claimed responsibility for organizing [the most recent] caravan,” but claiming responsibility and quietly funding are two different things entirely. One of the key organizers behind the caravan, Pueblo Sin Fronteras, or “People Without Borders,” want to fly under the radar, but we’re here to help lift the veil.

Though no single group has claimed control over the migrant caravan, at least two activists from Pueblo Sin Fronteras -Rodrigo Arbeja and Denis Omar Contreras – are embedded in the caravan, according to USA Today, the Los Angeles Times, and the Mexican newspaper La Jordana.


Contreras (often spelled Contera or Contera) reportedly helped to lead the caravan to illegally enter Mexico, where he told migrants “Welcome to Tapachula!” (a town near the Guatemala border). Abeja was also identified as one of the leaders of the caravans in April 2018, also backed by Pueblo Sin Fronteras.

The director of Pueblo Sin Dronteras in Mexico, and an American citizen, Irineo Mujica (seen left) was arrested on October 18th by Mexican officials for allegedly attacking immigration officials at a pro-illegal immigration protest near the Guatemala-Mexico border.

A press release on the group’s Facebook page from March 23rd, 2018 lists Mujica as its contact in Mexico, as well as Mensing in the United States. Then, in the more recent October 21st press release – which was also signed by Mujica – the group accuses the governments in both Central America and Mexico of adopting  “a policy of fear and racism imposed by the United States, doing its dirty work and shouldering the cost of repressive tactics that do not take into account the root causes of this exodus.”

The group then demanded Mexico become a “sanctuary country.”

The other signatory on the October 21st press release is Viridiana Vidal, a former NBC Telemundo journalist (seen left), who quit her job in June 2016 to become a self-described activist “against racists like Trump.” Vidal is now the Nevada state director of the union-funded left-wing advocacy group America’s Voice.

Alex Mensing organized a protest in San Francisco, California, in support of the caravans, where he said: “It’s time the Guatemalan government stand up for its Honduran brothers and sisters. The people who are currently fleeing Honduras are being forcibly displaced from their country . . .  and that is a direct result of the corrupt Honduran government and U.S. intervention and support for that corrupt government.”

So who is Pueblo Sin Fronteras??

The group claims to have organized over 1,000 economic migrants from Central America to cross the Mexico and U.S. borders illegally since 2010 – before most of the caravans. They also share the same address in Chicago – 2176 W. Division St. Chicago, Illinois, 60622 -which just so happens to also be the same address as the Adalberto Methodist Church, where Arellano once hid from U.S. immigration authorities prior to the founding of La Familia Latina Unida.

Even though La Familia Latina Unida had its IRS tax exemption revoked in May 2017 for failing to file a form 990 tax return for 3 consecutive years, the Illinois Secretary of State’s website still has the group listed as currently active, but their tax-exempt status is currently unknown.

Either way, Pueblo Sin Fronteras’s efforts continue with the aid of a third organization: the Centro Sin Fronteras (“Center Without Borders”), a 501(c)(3) illegal immigration organizing group that is headquartered in the Lincoln United Methodist Church in Chicago.

Headed by Emma Lozano and her husband, Walter “Slim” Coleman, (seen below) who founded the group in 1987 after the murder of Lozano’s brother, left-wing community organizer Rudy Lozano, the Center has called for a “moratorium on all raids” by immigration authorities. 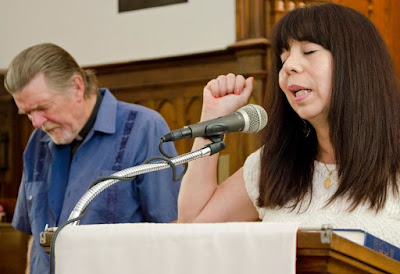 In addition, the center has called for “renegotiation of NAFTA and other trade and financial agreements” that would better suit the interests of Mexico, and comprehensive immigration reform “that provides legalization for the 12 million” illegal immigrants in the country.

Lozano responded in 2006 to the mass deportation of illegal aliens by ICE officials by calling for “a moratorium to stop deportations.” She also made plans to lead two activist campaigns: “one for mass citizenship training for undocumented immigrants, and another for mass voter registration.” In her own words, “We need to change America, we are all America.”

As a member of the League of United Latin American Citizens (LULAC), Lozano has coordinated events with LULAC at the Lincoln United Methodist Church. Sitting on the Center’s board of directors is Cecilia Garcia, president of the Chicago-based LULAC Council 5311.

As you may have guessed, Lozano is also an activist for so-called DREAMers – children of illegal immigrants to the U.S. protected by the Obama-era executive order that is commonly referred to as the “DREAM Act.”

Pueblo Sin Fronteras claimed in 2014 that it had “helped 400 first time applicants and 200 renewal applicants apply/reapply for DACA” (the Deferred Action for Childhood Arrivals executive program) with a “100 percent success rate.” This workshop for applicants was held at Lozano’s Lincoln United Methodist Church, an enormous hub for illegal immigration activism.

Lozano is also quite active in the Democratic Party politics as well. Lozano endorsed Illinois Democratic gubernatorial nominee J.B. Pritzker on October 18th, calling herself “a supporter from the very beginning.” Pritzker is running against Republican Gov. Bruce Rauner.

What’s disturbing, she signed the letter on Lincoln United Methodist Church letterhead, which is a potential violation of the Johnson Amendment prohibiting churches from campaigning or endorsing any candidate.

Financially, El Centro Sin Fronteras is small, with just under $34,000 in revenue and around $35,000 in expenditures in 2016. With the majority of its funding from 2000-2005 coming from the Public Welfare Foundation, a major left-wing foundation that also funds the far-left groups Alliance for Global Justice and the Southern Poverty Law Center (SPLC).

In addition, The National Immigration Forum reportedly gave the Center $60,000 in 2010. In turn, the Forum receives funding from several major left-wing grantmaking foundations, including Ford, MacArthur, and Rockefeller Foundations.

What’s disturbing is how brazenly all three groups – Centro Sin Fronteras, La Familia Latina Unida, and Pueblo Sin Fronteras – all use the Lincoln United Methodist Church as their rallying point for illegal immigration and their use of a tax-exempt church as cover, while advocating for foreign violation of our country’s border laws. 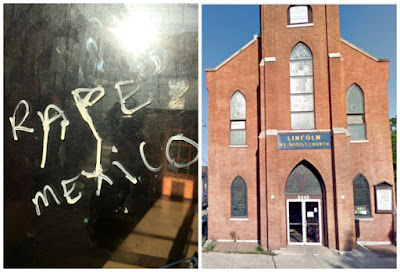 For two days in a row this week, neighbors of a Pilsen neighborhood church have awakened to see racist graffiti on the church’s doors. Swastikas and the message “Rape Mexico” were scrawled Monday and Tuesday in white paint across the glass doors of Lincoln United Methodist Church, 2242 S. Damen Ave.

Lincoln United Methodist is the sister church to Adalberto United Methodist in the Humboldt Park neighborhood where Elvira Arellano, a Mexican immigration activist who was living in the U.S. illegally, sought sanctuary for more than a year starting in August 2006. On Easter Sunday, the Rev. Jesse Jackson spoke to the Lincoln congregation about the importance of immigration reform for Christians.

“We’ve always been in defense of keeping families together,” said Sara Walker, a member of the church since 2012. “We believe that Jesus and his family were migrants themselves.”

Emma Lozano, pastor of both Lincoln and Adalberto, blames widely publicized remarks by Republican presidential candidate Donald Trump for inciting the vandalism. Trump has suggested building a wall between the U.S. and Mexico and has described some Mexican immigrants as “rapists.”

“The rhetoric that’s coming out of these presidential campaigns is really fueling the courage of these people who feel threatened by the growing Latino community,” she said. “These words that are being said — ’Mexicans are coming here to rape’ — those words do fuel violence and fuel anger, and someone is acting out of that.” 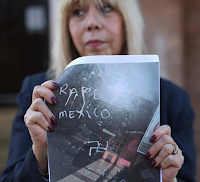 Chicago United Methodist Bishop Sally Dyck urged prayers for the congregation and vandals alike, even as she characterized vandalism aimed at the nationality or ethnicity of people as particularly “deplorable.”

“In addition to the churches and communities, we pray for those who did this vandalism that they may experience healing from the pain and anger that would cause them to do it,” Dyck said. As Christians we must all speak out against hateful speech such as this graffiti,” she added. “It’s a violation of the sacredness of the people in the church and community.”

On Tuesday, a church musician scrubbed the graffiti from the windows after the vandalism was reported to Chicago police. Church members stood guard late into the night Wednesday to discourage the vandals’ return.

“Our neighbors didn’t want to see it either,” Lozano said, adding that she held on to photographs to share with police and the public. She said the congregation and its leaders will not back down from showing solidarity with immigrants.

“We’re going to be more vigilant and ask our neighbors to do the same,” Lozano said. “I really believe God is going to protect us. We just need to let people know what is happening and they should not fear people who are already here. Their families are trying to stay together.”