(News articles from Shin Wirathu’s Blog and other sources in September 2014.)

Since Shin Wirathu has refused to stay at a luxury hotel he is accommodated at a Sri Lankan Buddhist monastery. Sri Lanka’s Muslims led by the Sri lank Muslim Council had tried unsuccessfully to block his visit by lodging bitter complaints to Sri Lanka President and Sri Lanka Immigration authorities. 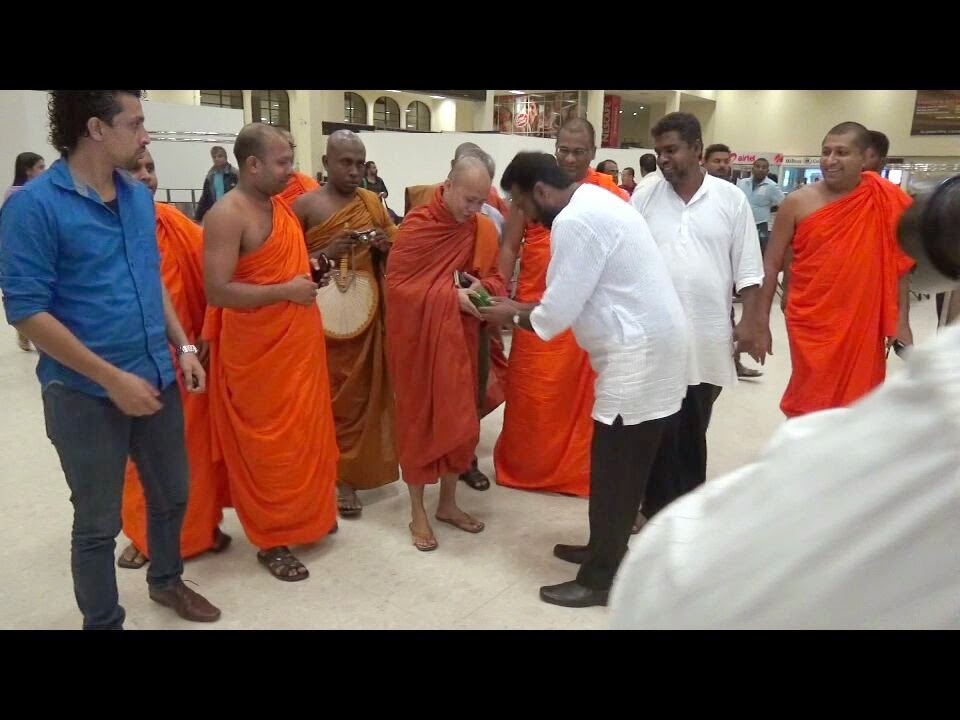 Washington, D.C. 27 September (Asiantribune.com): While the United States Department of State is deeply concerned about public discourse of a section of Buddhist clergy in Sri Lanka of its radicalism toward the Muslim minorities, and official pronouncement by the American Embassy in Colombo about the radical Buddhist organization called the Bodu Bala Sena (BBS- Buddhist Power Force) accusing it of instrumental in attacking Muslim places of worship and business institutions, it will be an added concern for the US officials here in Washington when they learn the arrival of a radical Buddhist monk from Myanmar to attend a BBS-organized even in Sri Lanka on September 28.

It has been reported that the radical and outspoken Buddhist monk from Myanmar Ashin Wirathu is expected to attend the BBS Great Sangha Council meeting on 28. Time magazine, with venerable Ashin Wirathu on their cover page, branded him as the face of Buddhist terror in Burma, the popularly known name for Myanmar. 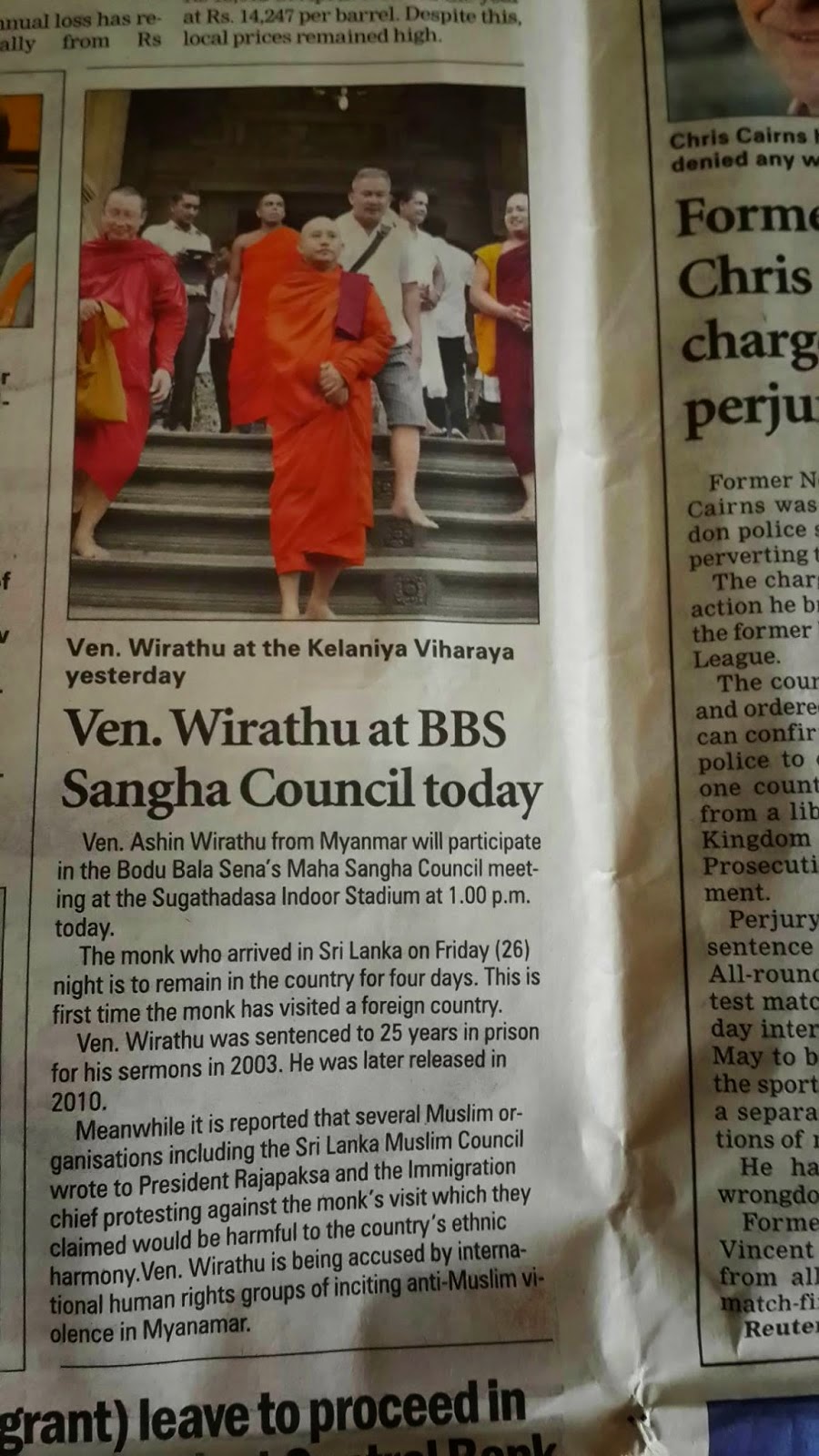 Sri Lanka is already been on US agenda since the defeat of Tamil Tigers in May 2009 on issues of minority rights, majority Sinhalese domination, human rights and alleged war crimes. In the past two or three US State Department annual Religious Report, Sri Lanka was almost castigated for its religious intolerance.

The arrival of Myanmar's radical monk may deepen this US agenda.

How much of Sri Lanka's long history of Buddhist prelates taking the leadership of political and social issues have affected Myanmar Buddhist clergy. Myanmar, also known as Burma, is an isolated nation until about two years ago.

During its isolation this South East Asian nation's social organizations and the Buddhist Order maintained a rapport and contacts only with Sri Lanka. The result was that the Buddhist monks spearheading campaigns on pressing Sri Lankan issues have undoubtedly affected the Myanmar Buddhists and their leadership, the monks.

It is in Sri Lanka that an organization called the Bodu Bala Sena (BBS) spearheaded a nationwide campaign to alert the nation of alleged Muslim expansionism with well attended successful mass rallies. It was alleged that the BBS was instrumental in attacking business ventures owned by Muslims in many parts of Sri Lanka.

Similar movement has taken momentum in Myanmar against the minority Muslim population who are non-citizens popularly known as the Rohingya. The clashes between the Buddhists and the Rohingya in 2012 and 2013 have been very brutal.

The Sri Lanka influence was highlighted by The New York Times in its June 21, 2013 edition in this manner: “Myanmar monks are quite isolated and have a thin relationship with Buddhists in other parts of the world,” Phra Paisal a Buddhist scholar and prominent monk in neighboring Thailand said.
It continued: One exception is Sri Lanka, another country historically bedeviled by ethnic strife. Burmese monks have been inspired by the assertive political role played by monks from Sri Lanka’s Sinhalese majority.

Of the 55 million population in Myanmar 85% is Buddhist unlike in Sri Lanka's 67%. Both nations have equal number of Muslims 8%. The difference is that the vast Muslim population in Myanmar are non citizens in contrast to Sri Lanka. In Myanmar the livelihood of the Rohingyas, the non citizens, are disrupted but in Sri Lanka the Muslim minority excel in business and other social affairs.

Nevertheless, in the West, especially among the state department officials, there is a belief that Buddhist radicalism aimed at the Muslims is purely on social and economic reasons.

The destruction of the World's tallest Buddhist statue in the Province of Bamiyan in Afghanistan 13 years ago by the Taliban Islamists too has been used by radical Buddhist prelates to mobilize the Buddhist population.

The NEWSWEEK in its September 24, 2012 edition highlighted the growing Buddhist radicalism in Sri Lanka and how it has affected in Myanmar.

The New York Times wrote: After a ritual prayer atoning for past sins, Ashin Wirathu, a Buddhist monk with a rock-star following in Myanmar, sat before an overflowing crowd of thousands of devotees and launched into a rant against what he called “the enemy” — the country’s Muslim minority. 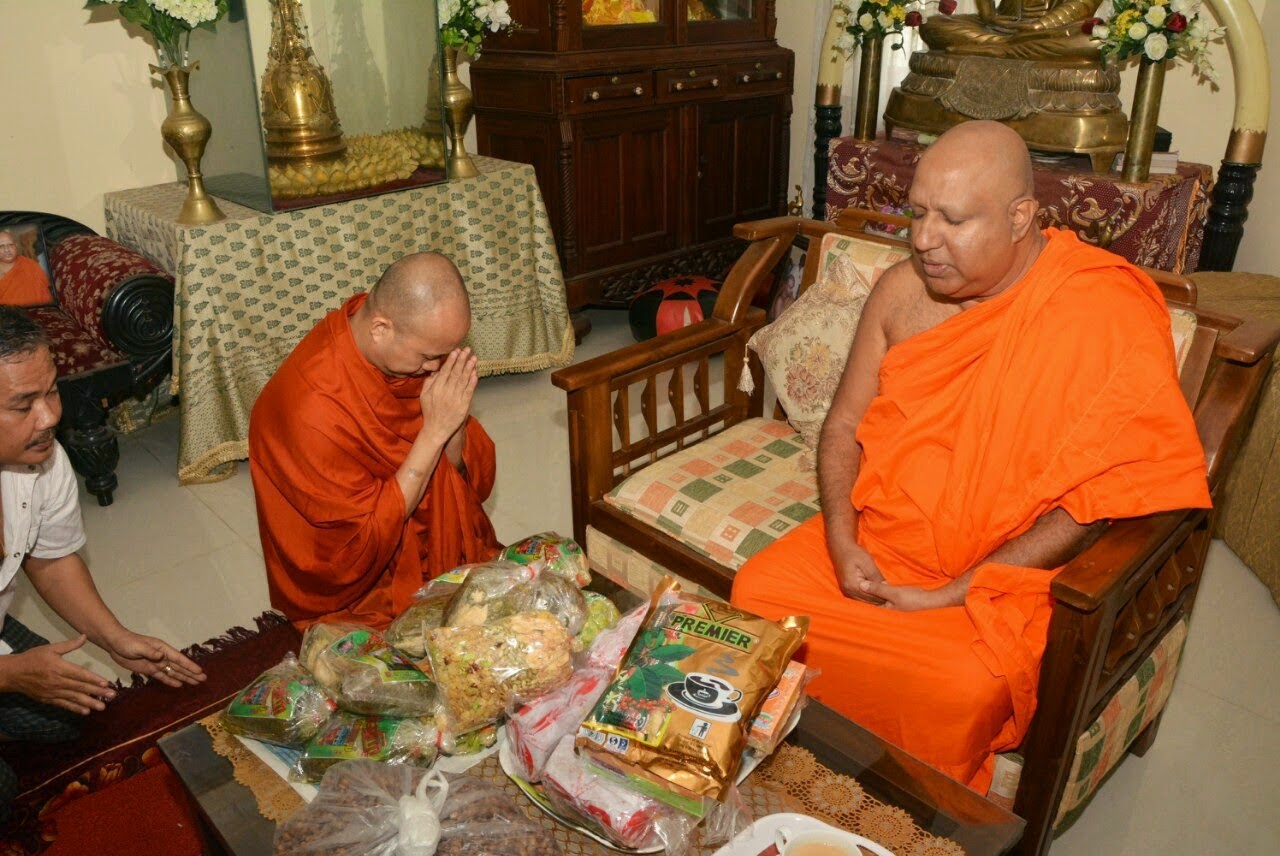 But 2012 onwards, images of rampaging Burmese Buddhists carrying swords and the vituperative sermons of monks like Ashin Wirathu have underlined the rise of extreme Buddhism in Myanmar — and revealed a darker side of the country’s greater freedoms after decades of military rule. Buddhist lynch mobs have killed more than 200 Muslims and forced more than 150,000 people, mostly Muslims, from their homes.

Ashin Wirathu denies any role in the riots. But his critics say that at the very least his anti-Muslim preaching is helping to inspire the violence, writes The New York Times.

What began in 2012 on the fringes of Burmese society has grown into a nationwide movement whose agenda now includes boycotts of Muslim-made goods. Its message is spreading through regular sermons across the country that draw thousands of people and through widely distributed DVDs of those talks.

The Times opined: Ashin Wirathu, the spiritual leader of the radical movement, skates a thin line between free speech and incitement, taking advantage of loosened restrictions on expression during a fragile time of transition. He was himself jailed for eight years by the now-defunct military junta for inciting hatred. In 2012, as part of a release of hundreds of political prisoners, he was freed. 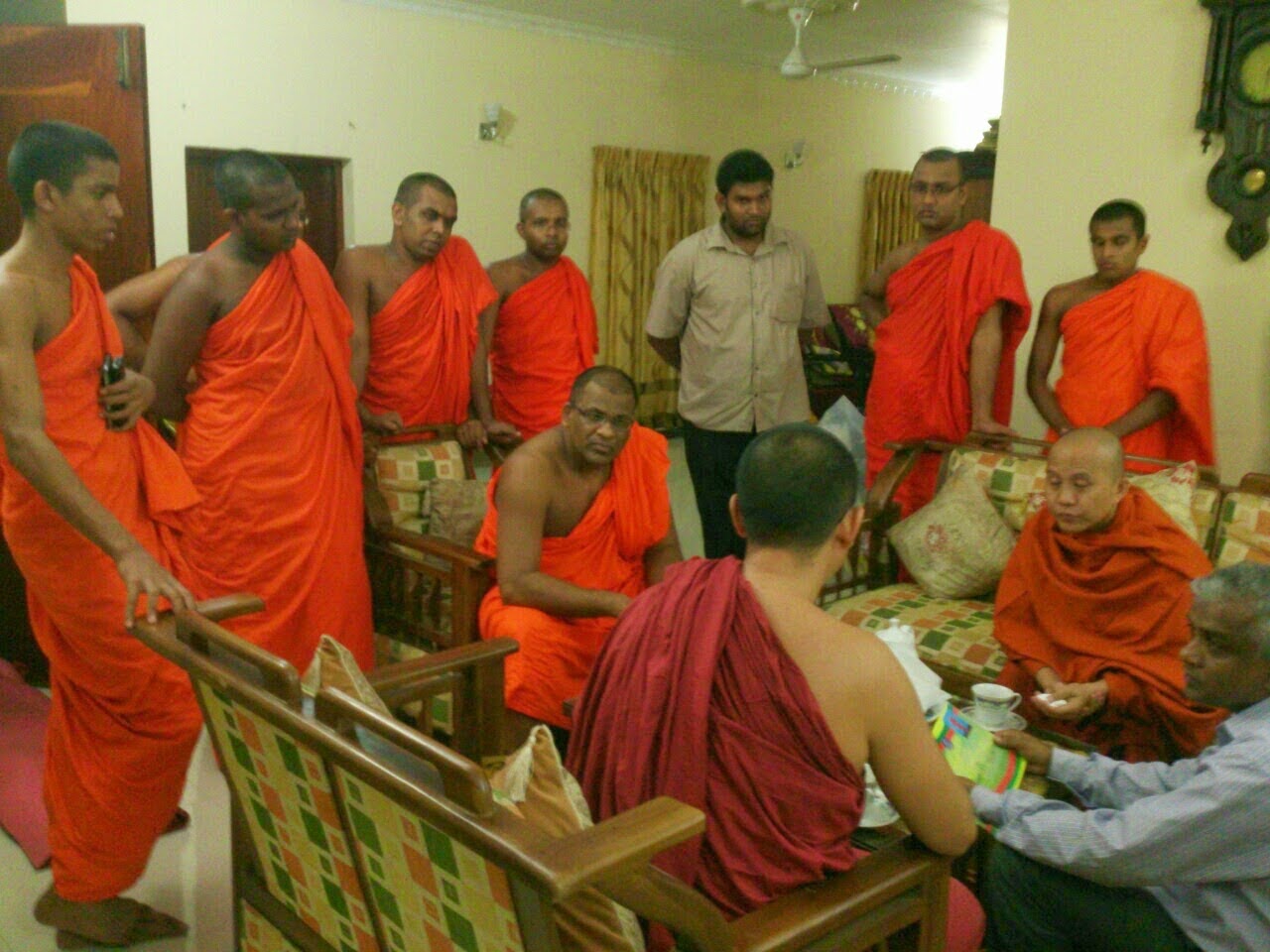 Ashin Wirathu's theme is: “If we are weak our land will become Muslim.”

But Ashin Wirathu, who describes himself as a nationalist, says Buddhism is under siege by Muslims who are having more children than Buddhists and buying up Buddhist-owned land. In part, he is tapping into historical grievances that date from British colonial days when Indians, many of them Muslims, were brought into the country as civil servants and soldiers.

The muscular and nationalist messages he has spread have alarmed Buddhists in other countries. Definitely not in Sri Lankan, according to The New York Times, as this South Asian nation's radical Buddhist prelates have different grievances but somewhat similar to what one sees in Myanmar.

Ashin Wirathu has tapped into that anxiety, which some describe as the “demographic pressures” coming from neighboring Bangladesh. There is wide disdain in Myanmar for a group of about one million stateless Muslims, who call themselves Rohingya, some of whom migrated from Bangladesh. Clashes between the Rohingya and Buddhists previously in western Myanmar roiled the Buddhist community and appear to have played a role in later outbreaks of violence throughout the country reports NYT.

Now this radical Buddhist monk from Myanmar has got an audience in Sri Lanka patronized by the BBS.

The Muslim Council of Sri Lanka has expressed its concern over the Myanmar monks arrival in Sri Lanka and In a letter to President Mahinda Rajapaksa, it says the presence of such a person who has caused so much violence on the Burmese Muslims would be a real threat to peace and peaceful co-existence in Sri Lanka. 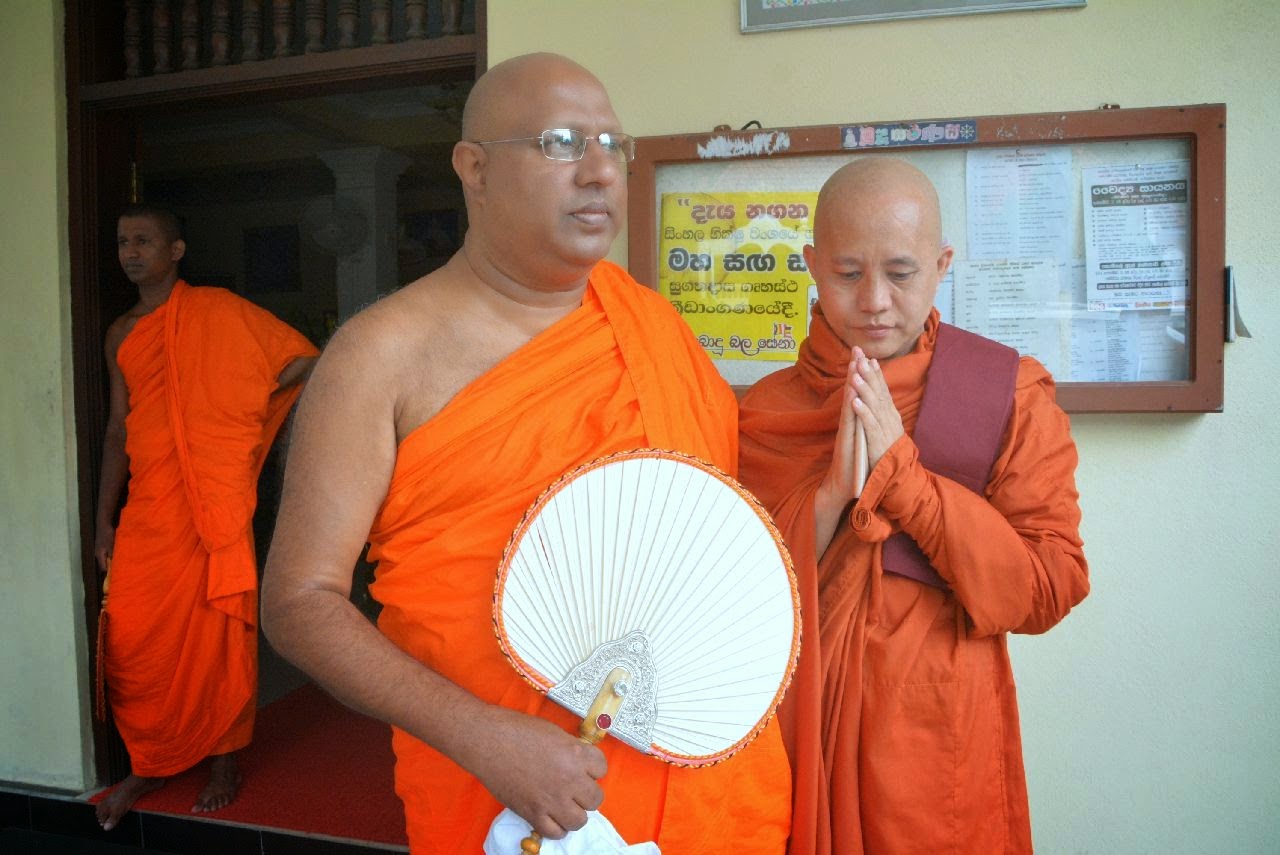 COLOMBO: Sri Lanka's main Buddhist nationalist group is preparing to host a radical cleric from Myanmar who is accused of fomenting hatred, at a convention that is already attracting opposition from minority Muslims.

The hardline Bodu Bala Sena (BBS) or Buddhist Force, which has been accused of instigating hate attacks on the island, said the Mandalay-based monk Wirathu would be an "honoured guest" at its convention in Colombo on Sunday.

The BBS said Muslim and Catholic groups were trying to block Wirathu's visit. "Racists, extremists and fundamentalists are trying to undermine our international convention," the group said in a statement.

Violence against Muslims in Buddhist-majority Sri Lanka has increased in the last two years, with hardliners attacking dozens of mosques, shops and homes. The country suffered its worst religious violence in decades this June when riots broke out in the resorts of Aluthgama and Beruwala, leaving four people dead.

The BBS has been accused of instigating a string of attacks against mosques, Christian churches and Muslim-owned businesses. The government has denied tacitly supporting the BBS. The Muslim Council of Sri Lanka had warned the authorities that allowing Wirathu to visit "would pose a serious threat to peace in our beloved motherland".

The BBS has links with Wirathu's nationalist 969 movement. BBS leader Galagodaatte Gnanasara has been compared to Wirathu, who has been accused of ratcheting up tensions between Buddhists and Muslims in his own country. Gnanasara has described both of them as "peaceful monks with no blood on our hands".


Sri Lanka and Myanmar share a common Buddhist heritage and have close cultural ties. In Myanmar, Buddhist-Muslim clashes have left at least 250 people dead and tens of thousands displaced since fighting broke out in Myanmar's western state of Rakhine in 2012. 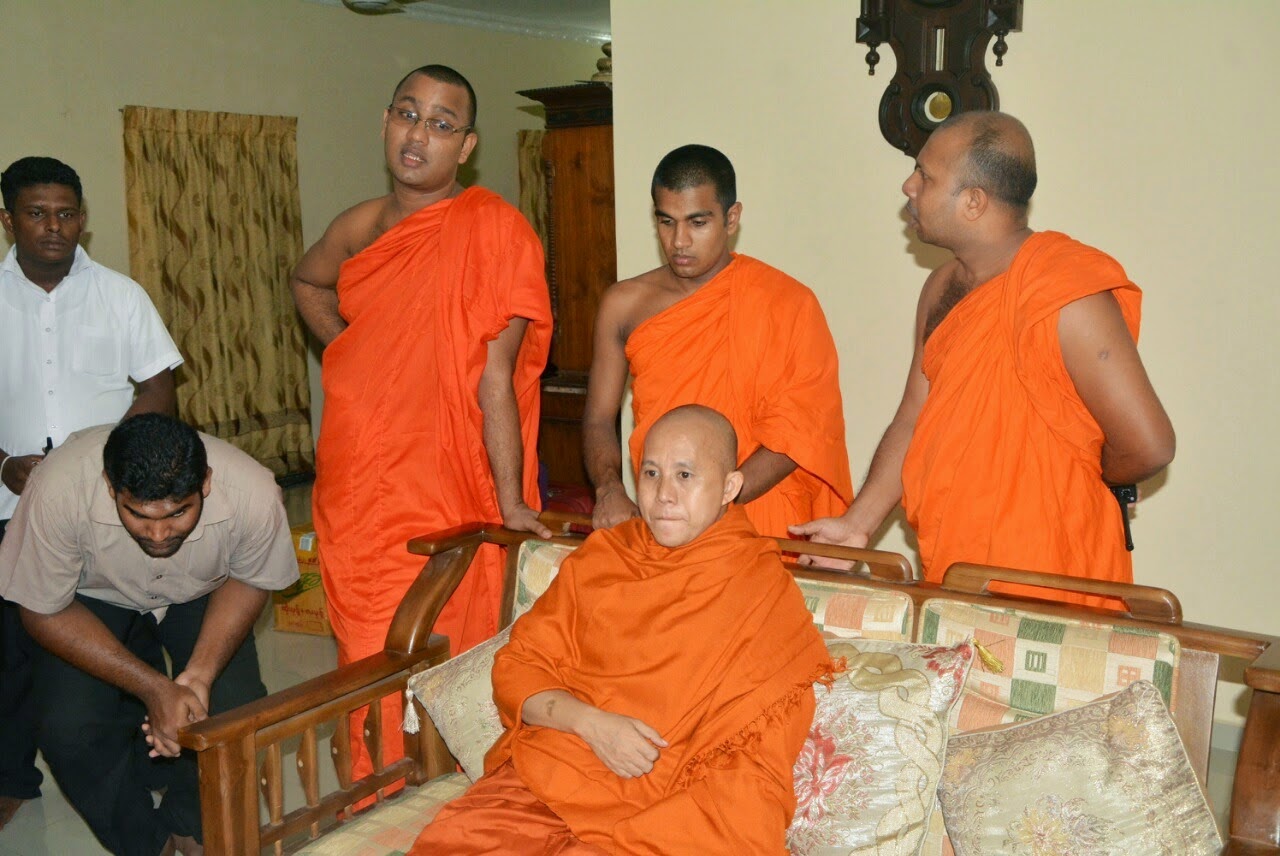 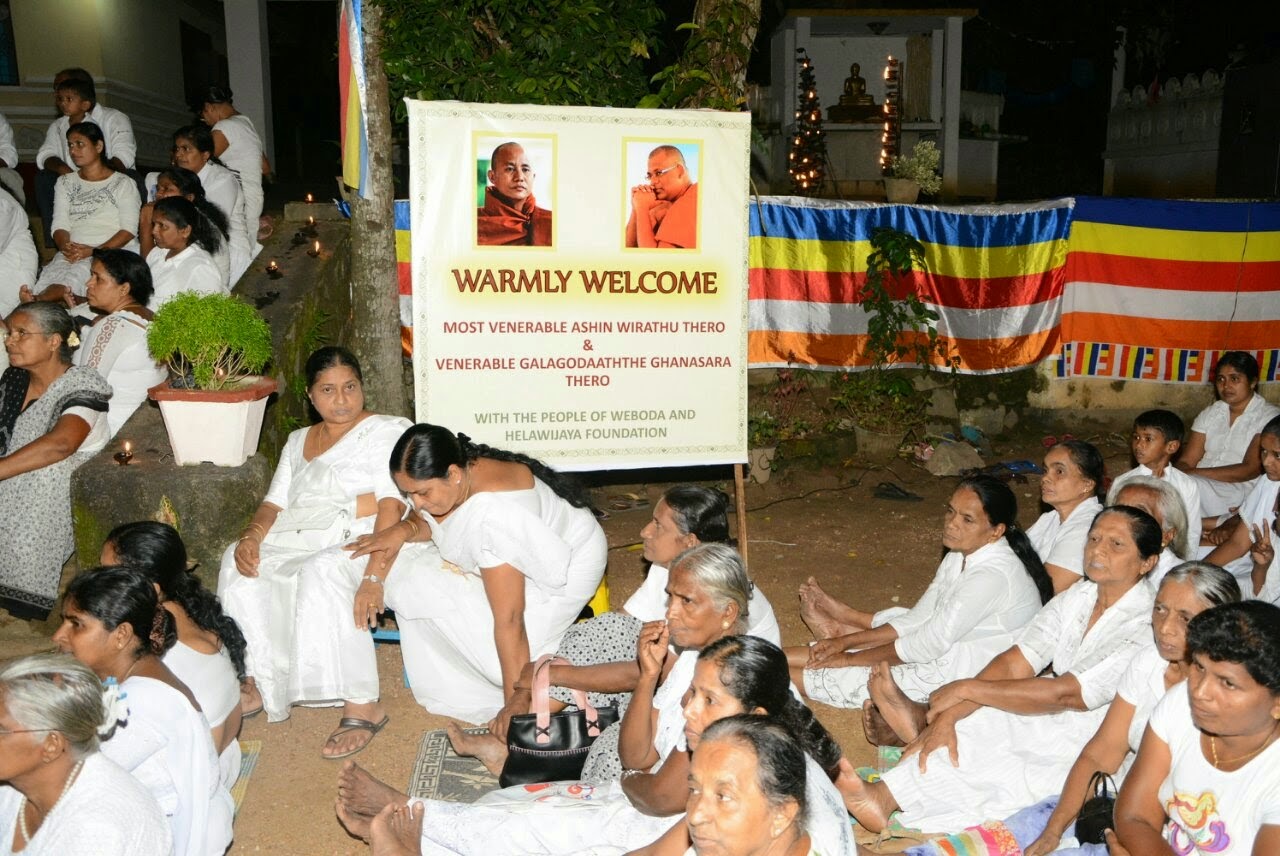 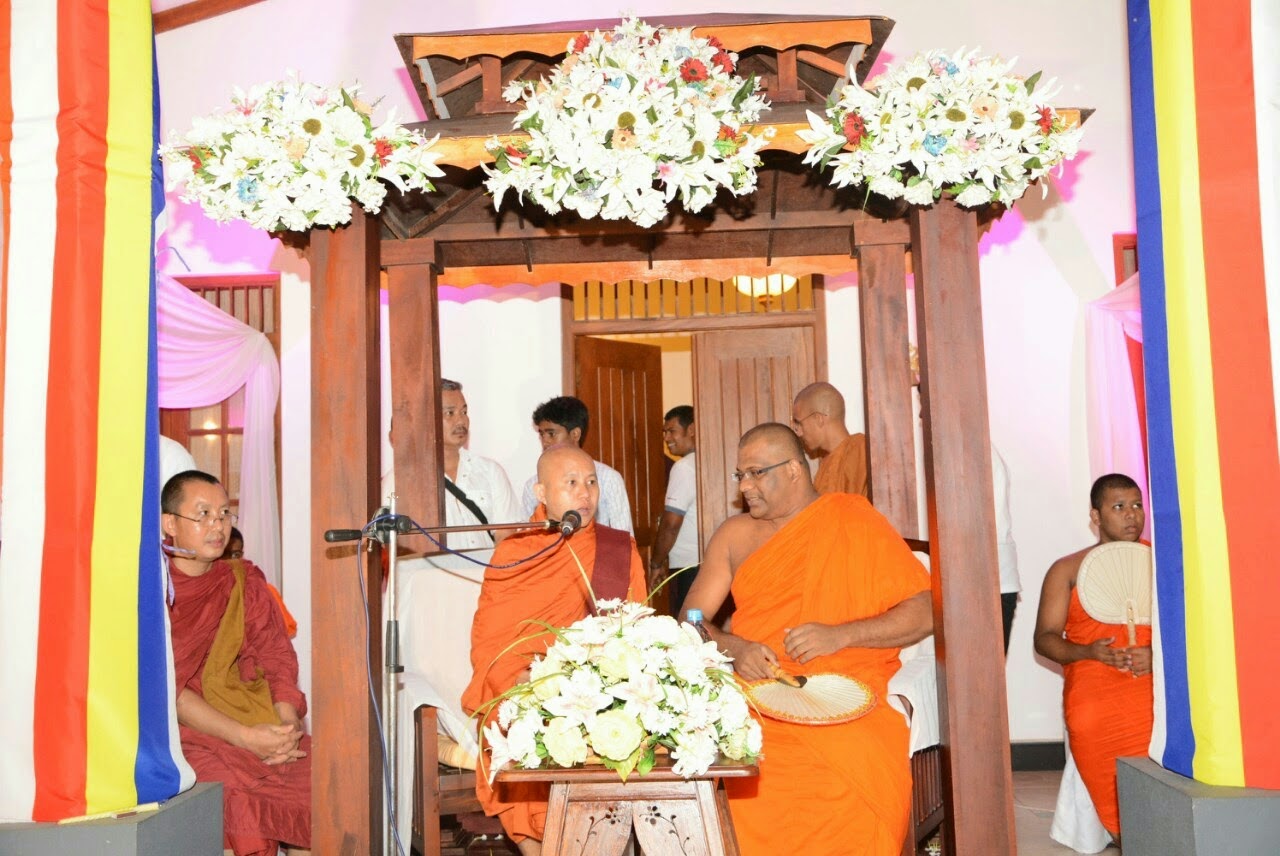 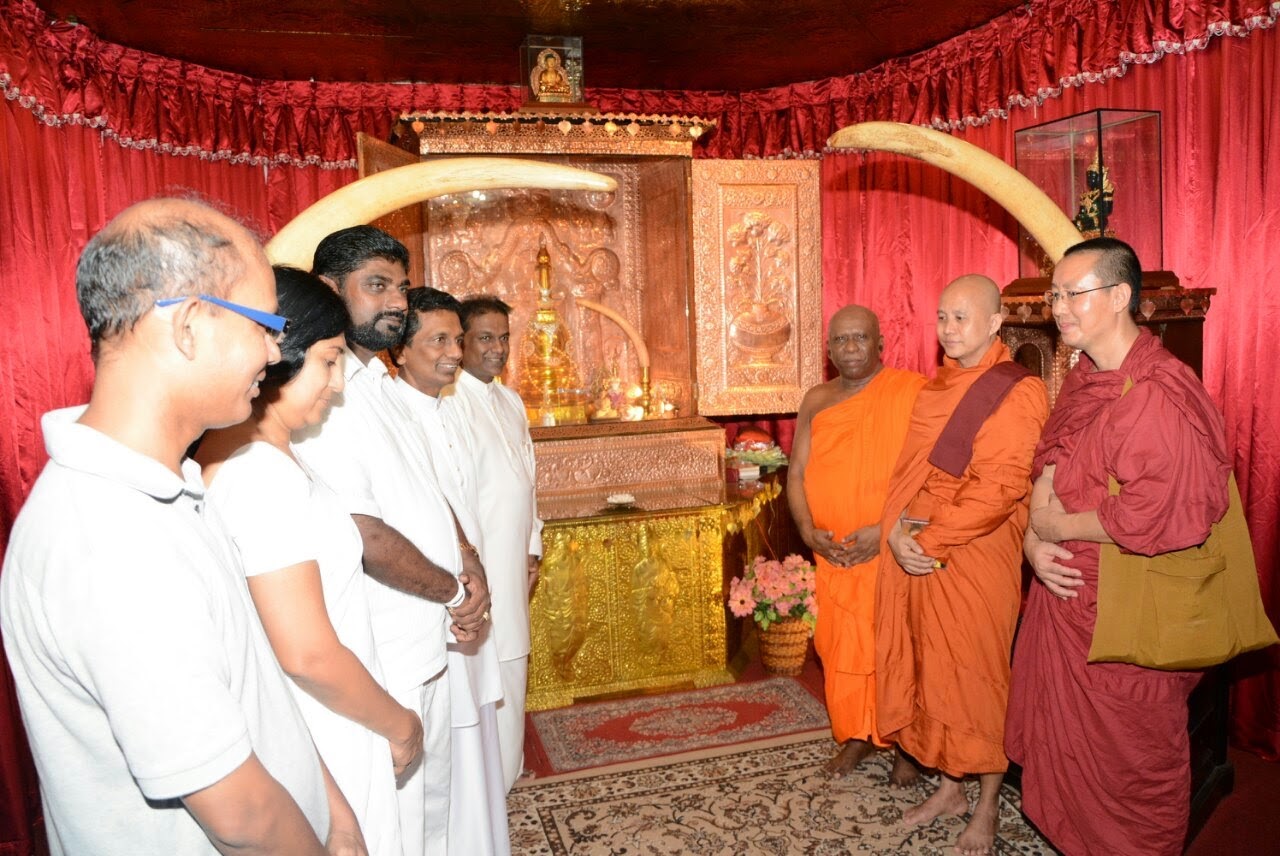 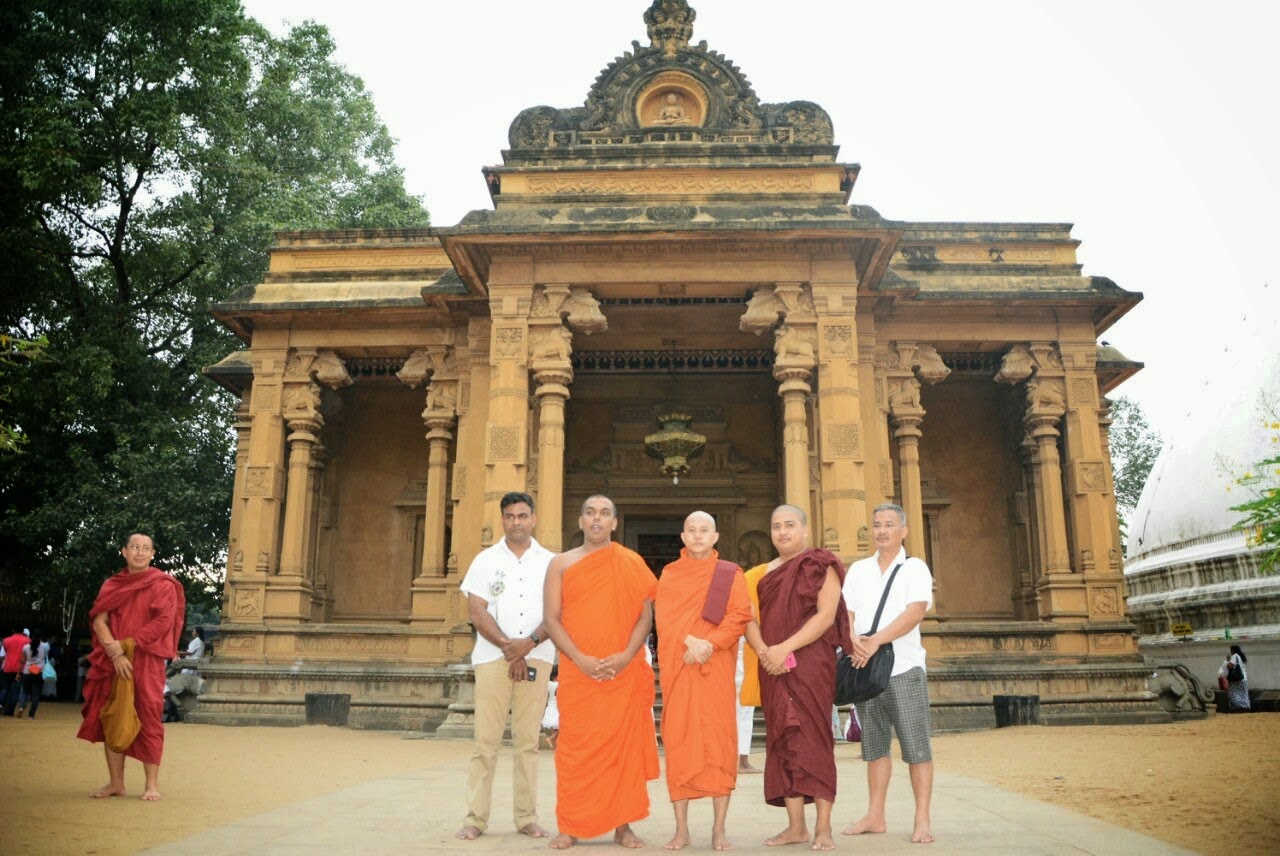 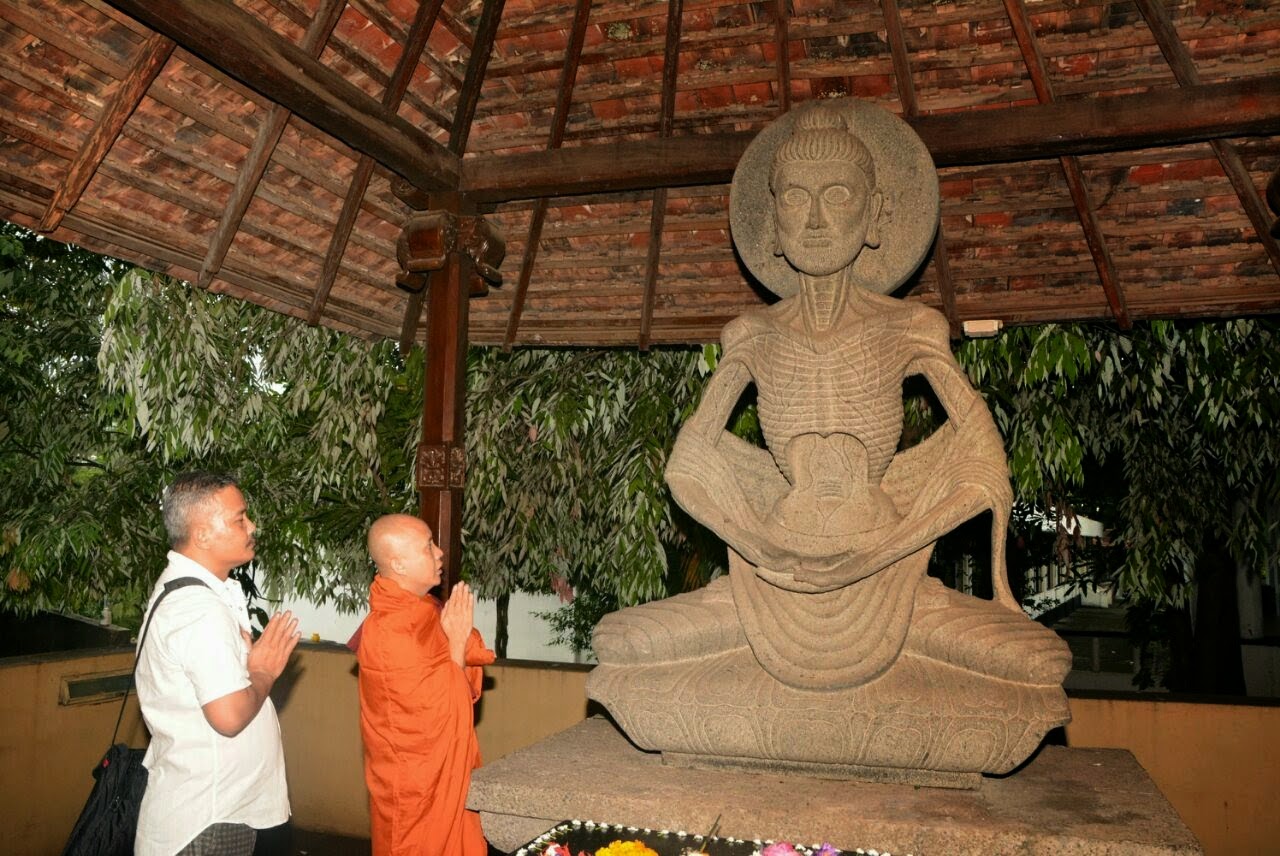 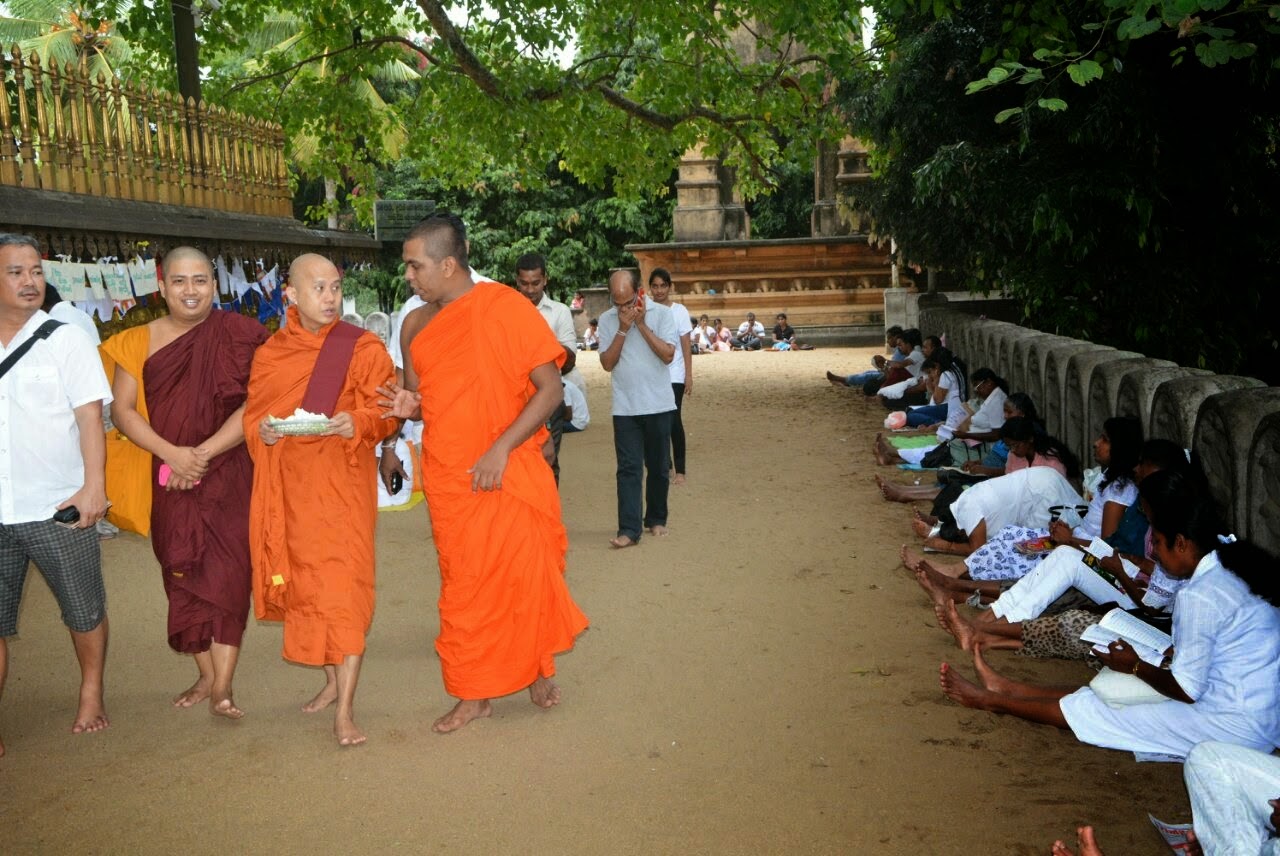 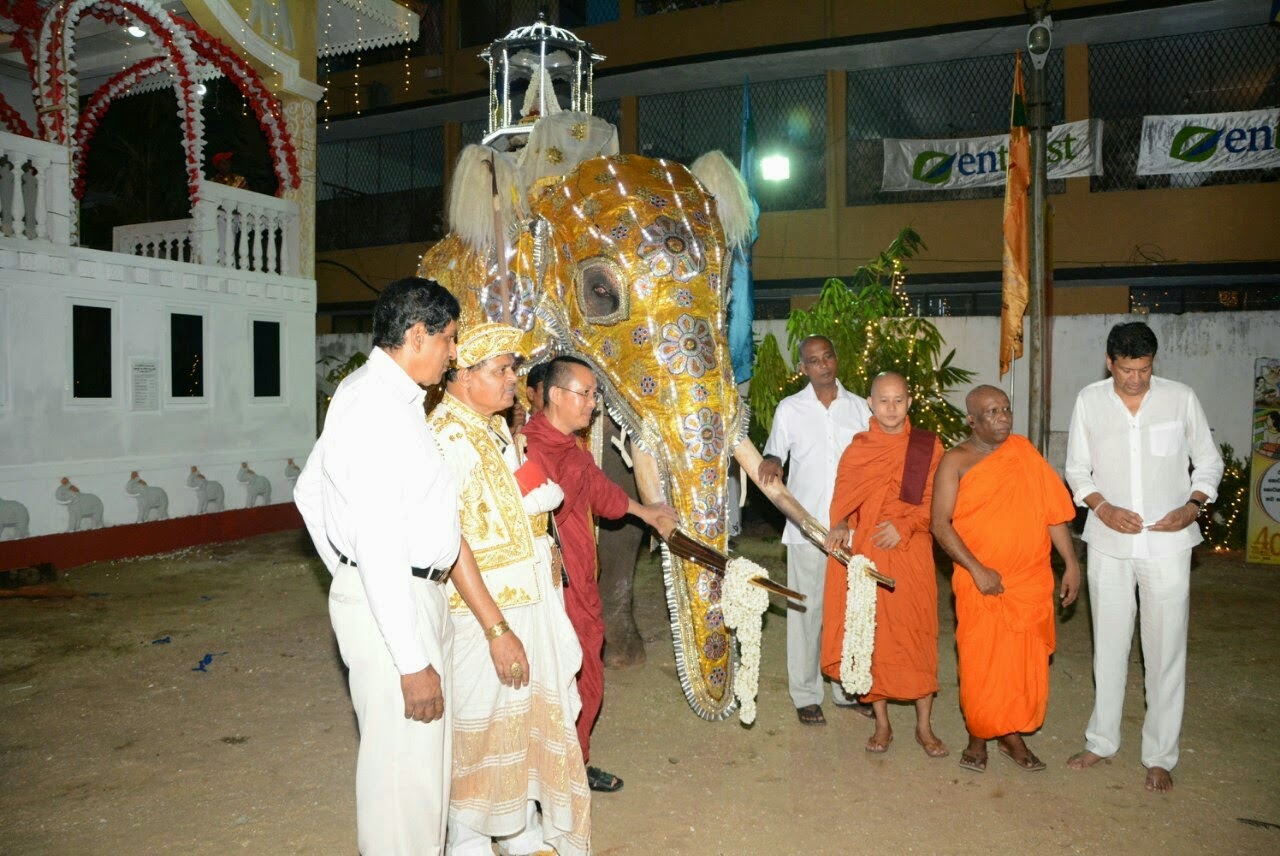