(Jamie Glazov’s article direct from the FRONTPAGE MAG on 19 September 2014.)

While the Islamic State of Iraq and Syria (ISIS) shocks and horrifies the world with videos of mass executions and beheadings, ISIS terrorist Rabie Shehada, also known as “the Palestinian slayer,” has stepped forward to give appalled onlookers a clearer insight into the evil that inspires him and his colleagues.

Let it never be said that Shehada ever suppressed his charm. This particular ISIS vampire has come a long way from studying mechanical engineering at a college in Nazareth Illit in Israel.


As a Muslim who clearly didn’t overlook the Qur’anic command to wage war on unbelievers, it’s understandable why developing refrigerators and microwaves didn’t really cut it for him when he entertained visions of his own glorious Islamic future. And so, as his Islamic fate would have it, the young engineering student quit university and traveled through Turkey to get to Syria to join the “moderate” rebel Free Syrian Army (FSA).

It appears the FSA came up a little short for Shehada in terms of what he thought a true Jihadi should be doing with his time. So he quickly moved on to bigger and brighter things: he joined the ranks of ISIS, where he adopted the a.k.a. “Abu Musaab al-Safouri,” named after the village of Safouri near Nazareth.

Shehada was now clearly liberated from the distracting and draining routines of developing power plants and factories; Allah had now bestowed upon him the blessing of being able to spend his days in the productive, fulfilling and cheerful way that every good and obedient Muslim is obligated to do by the Qur’an: executing and beheading the enemies of Islam and reveling in their blood.

While many observers might be mystified and startled by the pronouncements of Jihadi warriors such as Rabie Shehada, those who are knowledgeable of the practices of Jihad and the ideological foundations on which they rest are well aware that the behavior of someone like Shehada is a completely normal and everyday thing in the world of Islamic warfare.

To grasp the reality of Shehada’s Islamic odyssey, one must begin with the understanding that Islamic jihad has a unique religious component, sharing with secular totalitarianisms (Stalin, Mao, Khmer Rouge, etc.) the impulse to create an earthly paradise (through Sharia) by washing the slate clean with human blood.

Working towards enforcing the kingdom of Allah on earth, the greatest obligation of the Jihadist, like that of the believer in Communism and Nazism, is to submit his will to the deity, to kill “the enemy” and, if the opportunity ideally arises, to give his life for the deity.

Martyrdom and suicide become the favored expressions of this submission and of the radical desire for perfection. (It is precisely this ingredient that has so attracted the Western Left to Jihad, a phenomenon explained in my book, United in Hate). In the Islamic context of Jihad, therefore, this goal and impulse logically engenders the craving for, and practise of, spilling human blood – which can also include the ritual of drinking it (while eating the organs of the corpse and inflicting all varieties of mutilation against it.)

Thus, when one witnesses the actions of ISIS, one witnesses the phenomenon of pure Islamic Jihad. It is a death cult; Jihad represents a craving for death. The works of Islamism’s Godfather, Sayyid Qutb (1906–1966), documents and illuminates this craving perfectly, showing how the obligation of the Jihadi is not only to take the lives of others, but also his own life, in a process that necessitates the spilling of human blood in every sphere.

Qutb’s massive thirty-volume commentary, In the Shade of the Quran, has had enormous influence on today’s Muslim warriors worldwide. For Qutb, a non-Islamic state has no right to exist.

In his view, which is faithfully founded on Islamic texts and teachings, violent jihad is necessary to achieve the implementation of Islamic law worldwide, and the death of the Islamic warrior is a crucial element of this process. Qutb consistently stressed that it was necessary to submit oneself to the totality (Allah), that truth could not be reached by spiritual vehicles alone, and that violence was critical for the cause.

In his profound study of Qutb’s writings, Paul Berman outlines, in Terror and Liberalism, how Qutb linked truth and martyrdom and how, in so doing, he illuminated the Islamist synthesis of the totalitarian idea and the death cult.

Berman writes: Qutb’s doctrine was wonderfully original and deeply Muslim, looked at from one angle; and, from another angle, merely one more version of the European totalitarian idea. And if his doctrine was recognizable, its consequences were certainly going to be predictable.

And rebellion was bound to end in a cult of death. For how were any of Qutb’s goals to be achieved? What could it possibly mean to treat the entire Muslim population of the world, apart from the followers of his own movement, as jahili barbarians who were bringing about the extermination of Islam?

For Jihadists like Shehada and his ISIS comrades, therefore, killing is survival. For pure Islam to breathe oxygen, enemies are mandatory, and Islamic warriors can only live as long as they kill. In his book, The Mind of Jihad, the French-born strategist Laurent Murawiec explains the horror of this death cult, summarizing the ideology’s overriding theme as “I kill, therefore I am.”

In his study of the Jihadist’s mindset, Murawiec writes, “The means has become the end. The blood of the enemy renews the identity of the lynch mob. . . . Death is not an instrumentality—like the death of the enemy on the battlefield—it has become an end in itself.”

Murawiec points out that the suicide-killing manual left behind by Mohammed Atta, the leader of the 9/11 attacks, included a provision commanding that before going on his mission, the Islamic warrior must make sure his knife is sharp: “you . . . must not discomfort your animal during the slaughter.” The animal being referred to is the non-Muslim whom the Muslim is instructed to kill. As Murawiec observes, we see here the element of human sacrifice for the sake of pleasing Allah.

Thus, a typical example of the importance of spilling human blood in this type of sacrifice, and which explains the rationale behind what ISIS terrorist Rabie Shoudrie is doing and boasting about, was the assassination in 1971 of Jordan’s prime minister, Wasfi al-Tell, by PLO terrorists.

As al-Tell lay dying on the marble floor of the Sheraton Hotel in Cairo, one of the terrorists knelt down and began lapping up his blood (Murawiec, pp. 18-19). Murawiec cites a long sequence of such incidents of blood-worship in this Islamic venture and industry of death.

In the process of killing its “enemies,” this death cult, like all death cults, naturally eats its own children. This is why Islam devours Muslims along with non-Muslims — and why commentators who argue that Islamic Jihad cannot be Islamic because Muslims are also its victims have a completely ignorant (and often deliberate) misunderstanding of what Islamic Jihad really is. 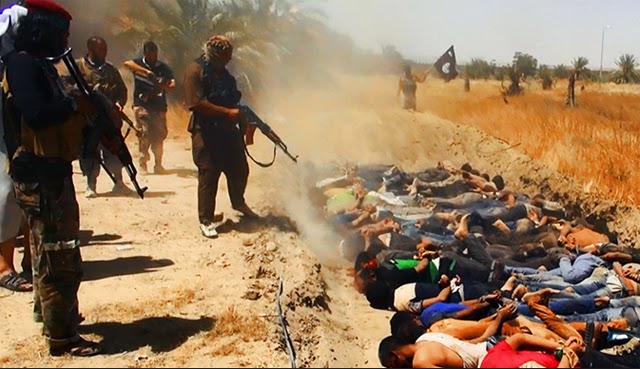 For the Jihadist, as for his Nazi and Communist totalitarian cousins, the goal of life is not to treasure it—and definitely not to utilize it to pursue individual happiness or personal fulfilment. The goal of life is to lose it in the very act of eradicating the enemy.

This is why the idea of America, and its sacred principle of “the pursuit of happiness”—embedded in the Declaration of Independence—is anathema to Islam, just as it is anathema to Nazism and Communism (as well as to the radical Left).

The pursuit of happiness implies that the individual and his will matter. An individual’s pursuit of happiness, moreover, implies that the world can be accepted for what it is—and human beings can be accepted for what they are. This is a deadly violation of the totalist code, since it contradicts the necessity of destroying the world and rebuilding it. Personal happiness is betrayal. Rage is a glorious commitment to the cause.

This psychotic mindset explains why Jew-hatred is such an important component of Jihad, as of most other death cults. Two of the most outstanding Jewish characteristics are the love of life and the enduring struggle to survive.

For Jihadists, as for Nazis and Communists, this is an egregious transgression against their faith. To Qutb, a truly “contemptible characteristic of the Jews”—as identified by the Koran—was their “craven desire to live, no matter at what price, regardless of quality, honor and dignity.”

It was Algerian militant Ali Benhadj who perhaps most powerfully and succinctly crystallized Islam’s central tenet of death serving to purify the earth. He stated: If faith, a belief, is not watered and irrigated by blood, it does not grow. It does not live. Principles are reinforced by sacrifices, suicide operations and martyrdom for Allah. Faith is propagated by counting up deaths every day, by adding up massacres and charnel-houses. It hardly matters if the person who has been sacrificed is no longer there. He has won. (Quoted in Berman, p.120.)

Rabie Shehada’s thirst for human blood should not, therefore, be much of a surprise to anyone. The Jihadist appetite for blood has been transparently evident in the long and vicious history of Islamic Jihad, just as it was horrifyingly conspicuous on September 11, 2001, when nineteen Jihadists “won” by crashing commercial airliners into America’s heavily populated buildings.

The horror of that day testified to the mind-numbing fact that when Maulana Inyadullah, a member of al-Qaeda, bragged that “the Americans love Pepsi Cola, we love death,” he meant it. And when Rabie Shehada brags about loving death “for the sake of God” and that his gang of Jihadi vampires is coming to slaughter us and drink our blood, he means it.
His threats are honest.


(Jamie Glazov is Frontpage Magazine's editor. He holds a Ph.D. in History with a specialty in Russian, U.S. and Canadian foreign policy. He is the author of the critically acclaimed and best-selling, United in Hate: The Left’s Romance with Tyranny and Terror. His new book is High Noon For America. He is the host of Frontpage’s television show, The Glazov Gang, and he can be reached at jamieglazov11@gmail.com. Visit his site at JamieGlazov.com.)