(Feature article direct from the BARE NAKED ISLAM on 8 September 2014.)

Mull that over for awhile as you try to get your head around the announcement that a group of 9/11 families is sponsoring an ‘anti-Islamophobia’ campaign. Family members of September 11 victims are taking a stand against Islamophobia with a new bus ad campaign designed to promote religious ‘tolerance’ (an idea virtually non-existent in Islam).

HUFFINGTON POST:  Sponsored by September 11th Families for Peaceful Tomorrows, the ad’s launch coincides with a symposium on gun violence and hate crimes taking place on September 6 in New York City. The symposium will encourage dialogue between panellists and audience members with the intention of discussing solutions to religious intolerance.


“We wanted to make a clear statement that our 9/11 family members do not want to promote fear and hatred in our names,” Peaceful Tomorrows Project Director Terry Greene, whose brother died aboard United Flight 93, told HuffPost. “We believe that unity and interfaith tolerance are the path forward to a more peaceful tomorrow.”

A poll conducted by the Arab American Institute from 2010 to 2014 looked at American attitudes toward Arabs and Muslims and found that unfavorable feelings toward these groups have increased in recent years. Forty-five percent of Americans polled said they viewed Muslims unfavorably.

We hope that many will join us in helping raise money and otherwise support this effort. Tides Center is our fiscal agent that will accept donations on our behalf.
George Soros’s Tides Foundation Defending Evil Islam

Among the crusades to which Tides contributes are: radical environmentalism; the “exclusion of humans from public and private wildlands”; the anti-war movement; anti-free trade campaigns; the banning of firearms ownership; abolition of the death penalty; access to government-funded abortion-on-demand; and radical gay, lesbian, bisexual, and transgender advocacy.

The Foundation is also a member organization of the International Human Rights Funders Group, a network of more than six-dozen grantmakers dedicated to financing leftwing groups and causes. 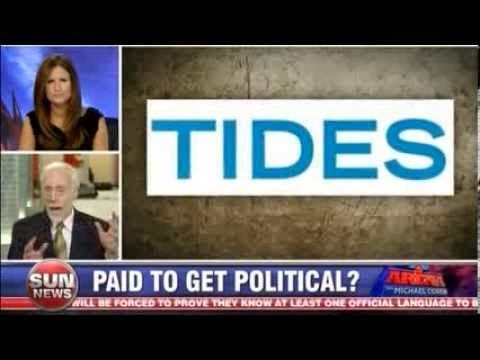 Immediately after the September 11, 2001 terrorist attacks, Tides formed a “9/11 Fund” to advocate a “peaceful national response.” Tides later replaced the 9/11 Fund with the “Democratic Justice Fund,” which was financed in large measure by the Open Society Institute of George Soros who has donated more than $7 million to Tides over the years.

Reciprocally, the Tides Foundation is a major funder of the Shadow Party, a George Soros-conceived nationwide network of several dozen unions, non-profit activist groups, and think tanks whose agendas are ideologically to the left, and which are engaged in campaigning for the Democrats.

Perhaps Ann Coulter was right when she criticized some 9-11 widows on the ‘Today’ show for “speaking out, using the fact that they’re widows” and “using their grief” and “the fact that you lost a husband” to make “a political point while preventing anyone from responding.”


Does anyone else smell a ‘gun control’ agenda in this new anti-Islamophobia campaign?