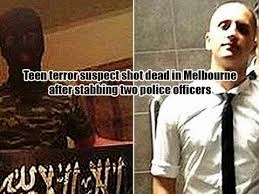 The 18-year-old, whose passport was cancelled a week ago on security grounds, was killed on Tuesday evening, having arrived at a police station on the outskirts of the city to attend a "routine" interview.

It came as tougher counter-terrorism laws were introduced to Australia's parliament on Wednesday to combat the threat of foreign fighters, with a proposal to criminalise travel to known terror hotspots without a legitimate reason.

Terror suspect Abdul Numan Haider was met by two members of the Joint Counter Terrorism Team and greeted them with a handshake before pulling out a knife and attacking both men, with one stabbed in the head, neck and stomach.


One officer fired a single shot that killed him, police said, adding that the teenager was carrying two knives. The Sydney Morning Herald said he had an IS flag with him and planned to behead officers and post the images online, although police would not confirm this.

"I can advise that the person in question was a known terror suspect who was a person of interest to law enforcement and intelligence agencies," Justice Minister Michael Keenan said, adding that the attack was unprovoked. Both police officers were in a stable condition after undergoing surgery.


The attack came after IS militants released a statement Monday urging the indiscriminate killing of citizens of countries taking part in the US-led coalition against the group, which has seized swathes of Iraq and Syria and declared an Islamic "caliphate". Australia was singled out, along with the United States, Canada and France.

"Obviously, this indicates that there are people in our community who are capable of very extreme acts," Prime Minister Tony Abbott said in a statement. Canberra this month raised its terror threat level and last week carried out large-scale raids in Sydney and Brisbane to disrupt an alleged plot by IS supporters to abduct and behead a member of the public.

The government believes up to 60 Australians are fighting alongside IS jihadists, while 20 have returned and at least another 100 are actively working to support the movement at home.

Underlying Western jitters about the threat they could pose, the Counter-Terrorism Legislation Amendment (Foreign Fighters) Bill introduced to Australia's parliament would make it a crime to travel to places considered terror hotspots without a valid reason, such as aid work or journalism.

The offence would be punishable by up to 10 years' imprisonment. The proposed changes also create a new offence of 'advocating terrorism' which would carry a maximum penalty of five years in prison.

Victoria state police chief Ken Lay said the teenager "had one thing on his mind, and that was to do the most amount of harm to these two people as he could.  We were aware of this young man and had been for number of months. The fact that the joint counter-terrorism task force was doing work around him indicates our level of concern," he added. 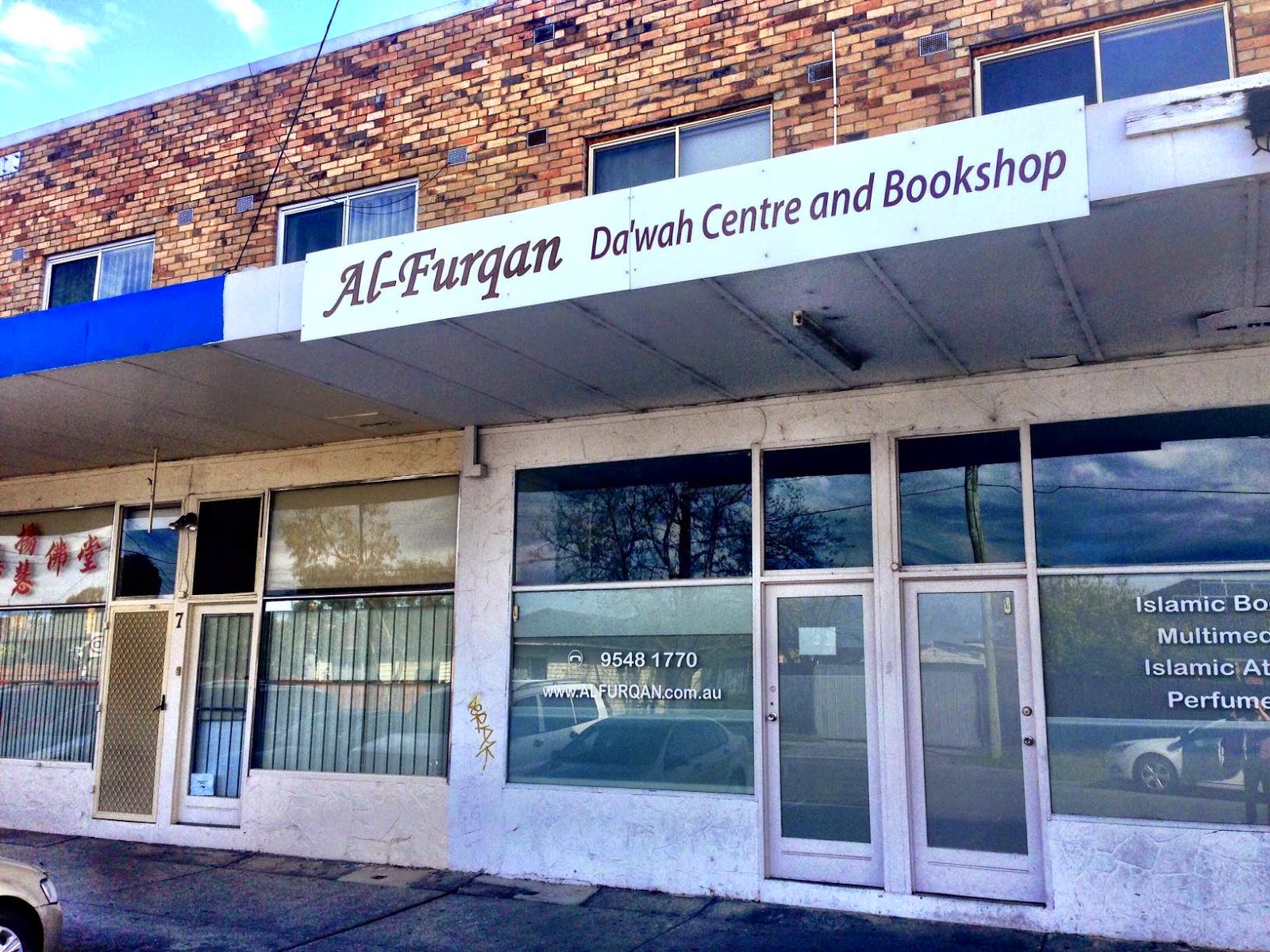 Haider was reportedly being investigated after unfurling an IS flag in a local shopping centre recently and posting inflammatory remarks on social media. The Australian Broadcasting Corporation said Haider's family was from Afghanistan and he had links with Islamic group Al-Furqan in southeast Melbourne, which was targeted in terrorism raids by police in 2012.

The rise of IS and moves to tighten counter-terrorism laws have raised tensions in the Muslim community, with leaders on Wednesday detailing a backlash that has included several mosques being vandalised, while calling for restraint.

"We call on everyone to exercise restraint and civility. We must not let emotion take over common sense," said the grand mufti of Australia, Ibrahim Abu Mohammed.

Australia has deployed 600 troops to the United Arab Emirates to join the international coalition gearing up for a campaign to eradicate the jihadists. It has also sent eight RAAF F/A18 combat aircraft. So far Australia has only been involved in dropping humanitarian and military aid to Iraqis under siege and has repeatedly ruled out intervention on the ground. 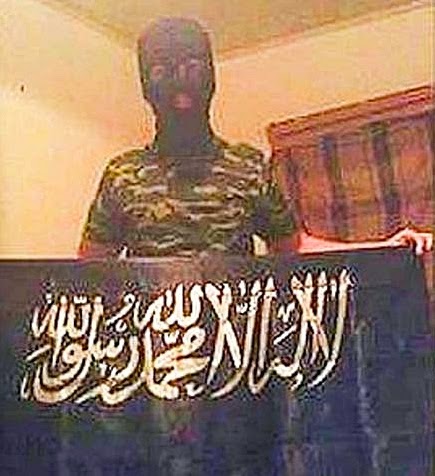 AAP: The 18-year-old Muslim man who stabbed two Melbourne police officers had been under surveillance for months. Counter-terrorism officers wanted to chat to Numan Haider after becoming concerned about the 18-year-old's behaviour and escalating rhetoric.

The terror suspect's passport was cancelled a week ago on national security grounds but police say they weren't about to arrest him when he turned up for a pre-arranged meeting at a Melbourne police station.

Within moments of shaking his hand, the two police officers were stabbed and Mr Haider was shot dead. A second knife was found on his body. "His actions may tell a story of what his intentions were," Victoria Police chief commissioner Ken Lay said on Wednesday.

There were also unconfirmed reports he had a black flag linked to jihadist group Islamic State, or ISIL. The Narre Warren man had been on the police radar for three months, but authorities say he was acting alone when he violently lashed out at the police.

"This is an incident resulting from the actions of one individual," Victorian Premier Denis Napthine said. "It is not about faith, it's not about ethnicity, it's about the alleged behaviour of an individual."

Fairfax Media reported Mr Haider may have planned to behead the officers, after ISIL on Monday issued a statement asking its followers to directly target Australians and citizens of other western countries. Police declined to comment.

The incident comes a week after Australia's biggest counter-terrorism raid, involving hundreds of officers, unearthed allegations of an IS-driven plot to abduct a member of the public and film him being beheaded.

Officers had become concerned Mr Haider's behaviour had escalated in the past week, and he had been seen in a shopping centre displaying an IS flag, Mr Lay said. "We learned of some behaviours that were causing us significant concern and our interest was greatly heightened," he said.

But Mr Lay said the joint counter terrorism taskforce officers did not intend to arrest Mr Haider. "We were just needing to have a chat and we just wanted to test some of his thinking," he said.

Mr Haider came willingly to the Endeavour Hills police station on Tuesday night, but wanted to meet the police in an adjacent car park. After shaking hands, Mr Haider repeatedly knifed the Australian Federal Police officer in the stomach, head and neck and the Victoria Police leading senior constable was stabbed twice to the forearm, police said.

The Victorian policeman then fired a single shot, killing Mr Haider on the spot. Mr Haider's family had tried to prevent him from leaving their house on Tuesday and were concerned for his safety, the ABC reported. But contrary to some reports, AFP acting commissioner Andrew Colvin said Mr Haider hadn't made any "specific" threats against Prime Minister Tony Abbott.

The Islamic Council of Victoria (ICV) has already received a number of threats since Tuesday's incident. "Threats, language against the family of the young man, clearly there are - and I use this deliberately - extremists on all sides of the community," ICV secretary Ghaith Krayem said.

Mr Krayem said the black flag being used by IS has a deep historical significance for Muslims and had been co-opted by the group. "Right now that flag poses a real point of sensitivity, and somebody who was thoughtful and mature would not be going around waving the flag," Mr Krayem said.

Mr Krayem said he would wait for investigations to conclude before judging Mr Haider's actions. "I'm not going to condemn what he did because we don't know what he did," he said.

Mr Abbott, who has travelled to the US for international meetings on the response to IS, said the incident underscored the need for police and community vigilance. "Obviously, this indicates that there are people in our community who are capable of very extreme acts," he said.

The 18-year-old who was shot dead in Melbourne after stabbing two anti-terrorism officers was researching Prime Minister Tony Abbott's travel plans, the ABC understands. Abdul Numan Haider was a "person of interest" who police had been investigating for three months before the incident on Tuesday night outside the Endeavour Hills police station.

The ABC understands Haider did not make a direct threat against the Prime Minister, but did make specific inquiries about Mr Abbott's plans to visit Melbourne. But as more details emerge about why Haider - whom the ABC understands had planned a trip to Iraq and Syria - was the focus of a counter-terrorism investigation, those close to the teenager have painted a different picture.

Mohamed Ibrahim roomed with Haider on a Muslim youth camp last year and described him as gentle and quiet and a man who was not aggressive or radical.

"He was a gentle, soft spoken young boy and when I heard the report yesterday about a man who had been shot - when I actually found out he was Numan - I was absolutely shocked," he told the ABC's PM program. "There were no hints that he was part of a group, there were no signs that he was someone we should be worried about."

He said it was alarming how quickly his friend changed. "I think him, from going to being an inquisitive young lad to being someone who was drawn towards these kind of ideas, it's something we need to take seriously," he said. "I think [it is] something that we need to further understand because obviously we don't."

Haider, whose family are from Afghanistan, had been associated with the radical Islamic group called Al-Furqan. It is understood he had recently moved away from the group. Last week, responding to the terror raids in Sydney and Brisbane, Haider took to Facebook, holding up an Islamic flag that has been appropriated by Islamic State (IS) extremists.

One post read: "The main message I'm sending with these statuses and photos is to the dogs AFP and ASIO who are declaring war on Islam and Muslims." But his friends said Haider was more of a fanboy who got in with the wrong crowd and had no genuine links to IS.

Government sources have also said police were investigating whether Haider's attack was a direct response to a fatwa that was issued earlier this week. The propaganda statement from IS included a reference to slaughter with a knife.

Federal Member for the seat of Holt in Melbourne south-east, Anthony Byrne, rejected suggestions the area had a problem with radicalised youth. "This individual who has been identified by the authorities - and I've received briefings today on this particular individual - is certainly the first time that this has come across my radar," he said. "It's early days in terms of really disseminating what happened, who this young man was talking to and how this event came about," he said.

He also criticised Senator Cory Bernardi, who wants a ban on burqas and other facial coverings and has requested the Parliamentary Speaker consider enforcing restrictions for anyone entering Parliament.

"A comment made by a senator who I didn't know was an expert on security, talking about burqas - ill-informed comments - [doesn't] add to either the investigations that are taking place or the very community harmony that we need in my area at this point in time."


Police would not publically comment on the threats Haider made but Victorian Chief Police Commissioner Ken Lay did say authorities had increasing concerns about the 18-year-old. "What we saw did cause some concerns which resulted in us taking some interest in him," he said. "It's true to say late last week we learned of some behaviours that were causing us significant concern and our interest was greatly heightened."