The two Burmese migrants accused murdering two British holidaymakers in Koh Tao have recanted their confessions, claiming they made under duress.

A lawyer from the Burmese embassy said Zaw Lin and Win Zaw Htun, who are jointly accused of bludgeoning Hannah Witheridge, 23, and David Miller, 24, to death, told him they were tortured into confessing.

The tourists were found dead at a rocky alcove on September 15 and police last week arrested the two migrant workers, both 21, announcing soon after they had admitted responsibility for the killings.

The bodies of Hannah Witheridge, 23, and David Miller, 24, were found on September 15. Post mortems found Miss Witheridge died from head wounds while Mr Miller suffered blows to the head and drowned. But comments by Burmese lawyer Aung Myo Thant to Burmese media, translated by the news website Coconuts Bangkok, threw doubt on their confessions.


'They told me that they were on the beach that night drinking and singing songs,' he said. 'They said they didn't do it, that the Thai police (along with their Bengali-Muslim) beat them until they confessed to something they didn't do. 'They're pleading with the Burmese government to look into the case and find out the truth. They were a really pitiful sight. Their bodies had all sorts of bruises.'

Amnesty International today demanded Thai authorities investigate the allegations of torture, despite denials by the police who insist they have DNA evidence to back up the confessions. The arrests followed weeks of pressure on police to solve a case that dealt a blow to Thailand's crucial tourism industry, badly shaken since the army staged a coup and imposed martial law in May. 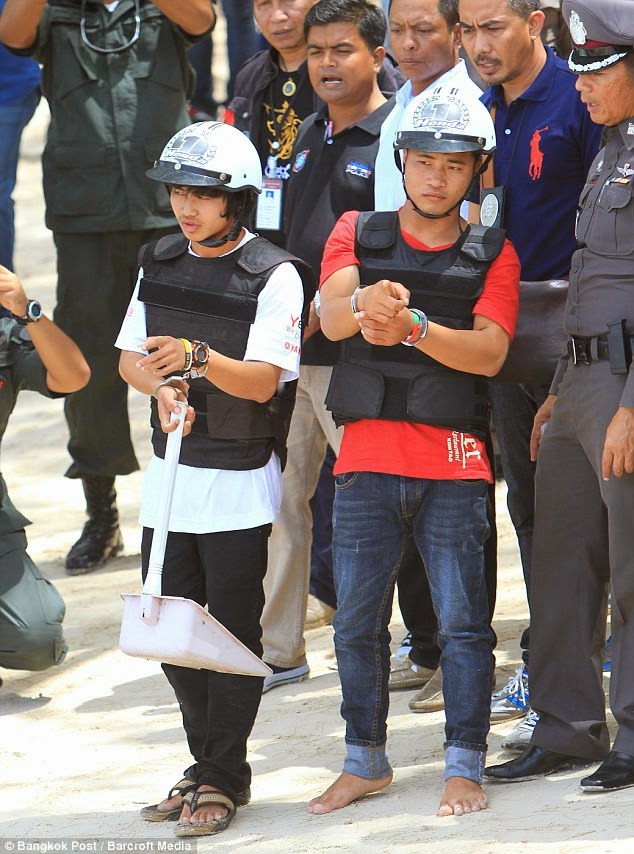 Amnesty cited a lawyer from the Burmese Embassy's legal team, who met with the suspects, as saying that one of the migrants 'alleged police beat and threatened him with electrocution.' The group also said that 'numerous sources have reported further acts of torture and other cruel, inhuman and degrading treatment of other migrant workers from Myanmar arrested by police in connection with the investigation. 'According to reports, police officers poured boiling water over some of the Burmese migrant workers they were questioning. Others were also beaten and threatened.'

The decision by Thai police to make the suspects take part in a public and televised re-enactment of their alleged crime also 'undermined their right to be presumed innocent', Amnesty said. Two years ago, Thai police said they would stop public reconstructions of crimes using alleged perpetrators after complaints that they prejudiced trials – but they resumed after a few months.

The notion that two slightly built Burmese men could have so violently murdered a European couple has been lampooned in Burma, with one popular cartoon showing the suspects as monkeys taking two huge elephants.

In Thailand, meanwhile, there has been much made of a claim that police picked a Rohingya Muslim roti street vendor to act as translator for the two men, who are of Rakhine Buddhist background. It is suggested that because of the ethnic enmity between the two groups, the translator cannot be relied upon to give impartial translations.

If found guilty, the suspects could face the death penalty. There are widespread rumours on social media that the real perpetrators are Thai mafia who are being protected by police. The decision by Thai police to make the suspects take part in a public and televised re-enactment of their alleged crime also 'undermined their right to be presumed innocent', Amnesty said

Richard Bennett, Amnesty International's local director, said: 'Thai authorities must initiate an independent, effective and transparent investigation into mounting allegations of torture and other ill-treatment by police. 'The pressure to be seen to be solving an appalling crime that has garnered considerable attention should not result in the violation of rights, including to a fair trial.'

On Tuesday, Thailand's National Police Chief Somyot Poompanmoung held a press conference in Bangkok to quash speculation and allegations on social media that his officers had framed the suspects or were seeking scapegoats.

Another officer denied the torture allegations, and Police Lieutenant General Jaktip Chaijinda, head of the investigation team, told The Associated Press today 'there was neither torture, nor threats against the suspects in this case.' 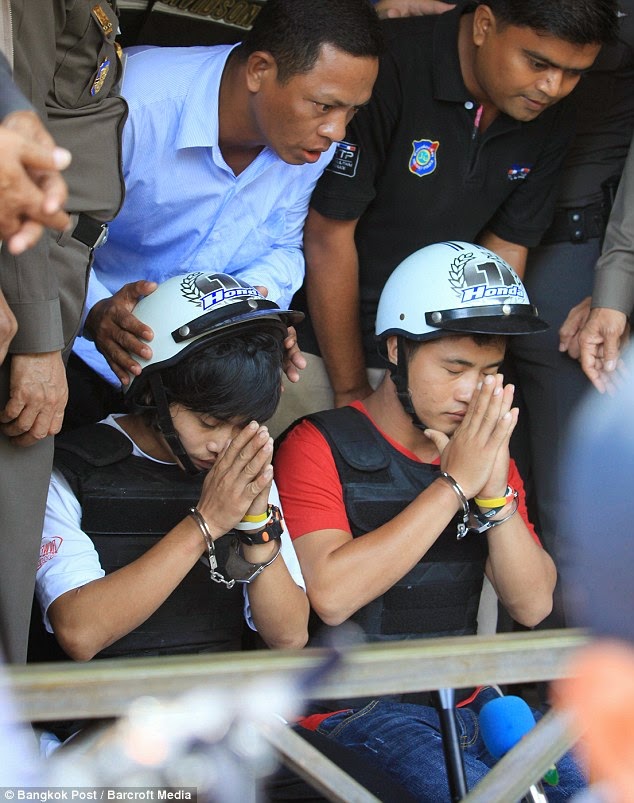 Zaw (left) and Win (right), sit and pray: The man pictured top right is their translator who, according to rumours circulating online, is a Rohingya Muslim roti seller, an ethnic group with some enmity towards Burmese after serious ethnic violence in Burma saw thousands of Rohingya Muslims murdered

The two Burmese bar workers said to have confessed to murdering Hannah Witheridge and David Miller were caught on CCTV riding a moped on Koh Tao on the night of the killing. It is not known which of the three they are.

The bodies of Miss Witheridge and Mr Miller, 24 were discovered on a rocky alcove along the shore near a hotel where both were staying. Police say Miss Witheridge was raped. Autopsies showed that Miss Witheridge died from head wounds while Mr Miller suffered severe blows to the head and drowned in the surf. Koh Tao, which is renowned for its quiet beaches and popular diving sites, is 250 miles south of Bangkok.

About 2.5million people from Burma, officially known as Myanmar, work in Thailand, most as domestic servants or in low-skilled manual labour industries like construction, fisheries or the garment sector.

Last week, police said the Burmese men had admitted to killing the tourists and DNA found on Witheridge matched samples taken from the suspects. Mr Miller died from drowning and blows to the head, while Miss Witheridge died from severe head wounds.


The suspects, who have been identified only as Saw Rim and Win, both 21, have been charged with the murder of both Britons and the rape of Miss Witheridge.

(Blogger's Notes: Two Burmese accused reportedly said to their parents that they did not commit the crime and they were forced to confess after Thai policemen severely tortured them for two days and nights and then their Bengali-Muslim interpreter repeatedly told them that if they didn't confess they both would be killed either by burning-tyre-tube necklace or being chopped into pieces and thrown overboard.) 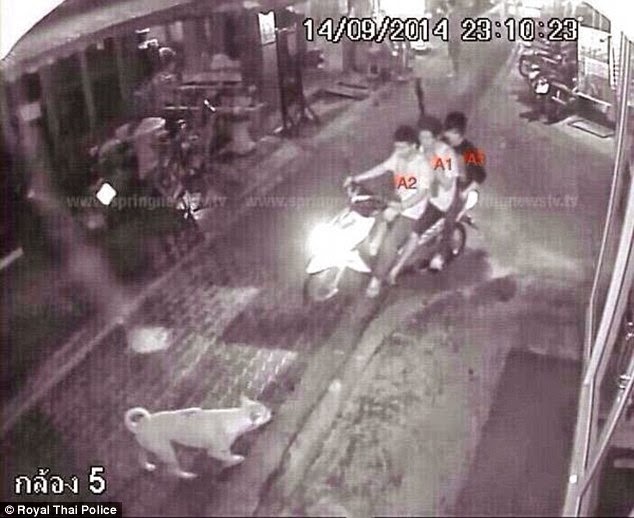